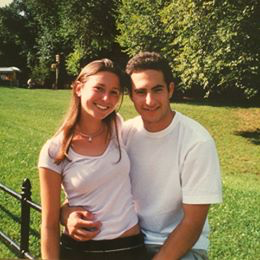 When Jamie Chesner ‘05 arrived at Harvard University and told her classmates that she was dating her high school sweetheart who attended a different college, some were puzzled. “People asked me, ‘Why do you want to stay together?’” Jamie said. “I knew then and my answer always was, of course, he is the one.”
Jamie was a sophomore at Horace Mann when she began dating her future husband David Chesner ‘03 in the spring of his senior year. Some of Jamie’s most memorable times with her husband in high school were spent “outside on the beautiful field together,” as well as attending his senior prom, she said. When the Chesners started dating, they played fun one-on-one games of basketball, David said.
The Chesners were also fortunate enough to have mutual friends, some of whom became bridesmaids and groomsmen at the Chesners’ wedding in 2012, David said. “We had enough mutual friends to be in the same places at the same times, and our relationship naturally happened from there.”
During the six years following David’s graduation from Horace Mann, the Chesners dated long-distance, as David attended the University of Pennsylvania and Jamie attended Harvard University.
“I think the long distance for some people can be challenging, but for us it was really easy,” Jamie said. “We enjoyed visiting each other’s respective schools and definitely made the time and effort to prioritize our relationship.”
In high school, it “clicked very instantaneously” for David that Jamie was the one, and their relationship continued to “evolve in the best of ways” during their college years, he said. “What made it easy was that we were always very compromising of each other.”
A few years after the Chesners’ respective college graduations, they were married in New York City, surrounded by many of their high school classmates. “I don’t think anyone was surprised,” Jamie said.
The Chesners’ daughter, Leighton Chesner, is currently in the threes program at the nursery school and loves it, Jamie said. Even after graduating from Horace Mann, the Chesners remained in touch with many members of the school community, which played a role in their decision to send their daughter to the school, David said.
“David and I had the most incredible experience at HM academically, extracurricularly, and socially,” Jamie said. “We wanted the same opportunity for her.”