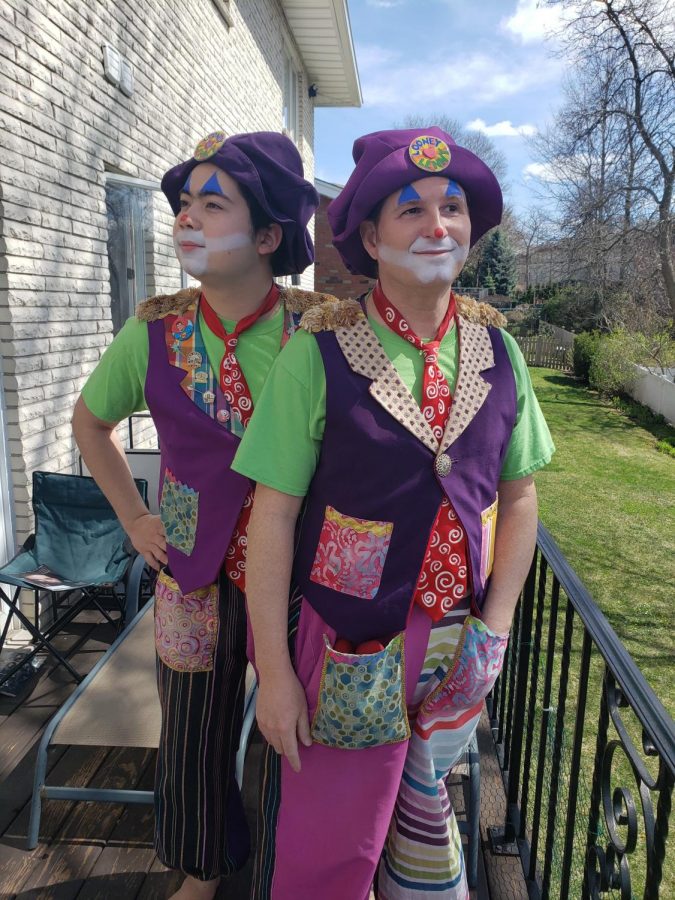 “We get to cheer up the kids every day; even though we haven’t made any money, we’ve just been trying to get out there to make people happy,” Dylan Chin (12) said. “That sounds so cliche, but I mean it.”

Over the last couple of weeks, Chin has been helping his stepfather, Andrew Hammer, perform online comedy acts for children.

Hammer, a professional clown, performs at hospitals, birthday parties, and other events, he said. “I was a humorous child growing up, pretty funny, and the class clown,” Hammer said. He later went on to study acting, directing, and playwriting at NYU, but once he graduated, he couldn’t settle on a job.

“I could’ve been an actor, gotten a day job, but I didn’t want to do any of that stuff,” Hammer said. “I wanted to have a performance oriented job, and that’s when a friend of mine contacted me saying a clown agency was hiring.” Twenty-five years ago, he quit the company and started his own brand, “Loony Lenny,” which he says has helped him start working with hospital work and non-profit organizations, he said.

Normally, Hammer performs live at hospitals, such as the Maria Ferrari Children’s Hospital in Westchester and at birthday parties. About three weeks ago, Hammer was told by the hospitals where he performed his shows that he could not continue to do so for the time being, given the current circumstances of the coronavirus pandemic. Hammer now live-streams his show on Facebook and YouTube, where he does several magic tricks and interacts with his viewers. Despite his success on Facebook and Youtube, he wants to begin broadcasting his show on hospital TVs for patients to enjoy.

“When the hospital stuff stopped, I had this idea to perform on Zoom,” he said. Currently, hospitals are facing their own challenges due to the overload of patients, and many sick children have been stuck in their rooms all day. However, due to privacy reasons, Hammer can’t begin livestreaming on hospital TVs yet, but he plans on working with these hospitals to find a solution for the future.

“It’ll be easier for everyone to engage once the hospital system becomes more balanced, but right now everything is out of whack,” Hammer said. “I am putting out what I can so people can enjoy it, and I just hope that eventually I can do Zoom Therapy, so I can build a relationship with the kids over time. I’ve known some of these kids in this hospital for a year or more, and I want to keep the relationships going.”

Recently, Chin has been assisting his step dad with creating content for the show and has been setting up the Looney Lenny Youtube channel as well as the Facebook live streams. “Dylan is part of the idea team – he brainstorms what [tricks] to do. He also sometimes comes on to camera to assist with my tricks, and he helps behind the scenes with filming,” Hammer said.

During one Facebook livestream, Chin dressed up as Looney Lenny, looking identical to his stepfather, and pretended that the audience was seeing double, Chin said. “I was trying to create a mini Loony Lenny for a trick, so I had Dylan appear on the screen and we started arguing about who is the real Loony Lenny,” Hammer said. “It was really funny, and I got a lot of laughs on the live as we were fighting over who was who.”

“Though one day we might be able to be monetized on Youtube, we’re just focused on cheering up the kids,” Chin said. “Seeing [my stepdad’s] energy and how fun performing is has always made me feel like this is something I also want to do.”