To meet or not to meet: MD implements more virtual classes 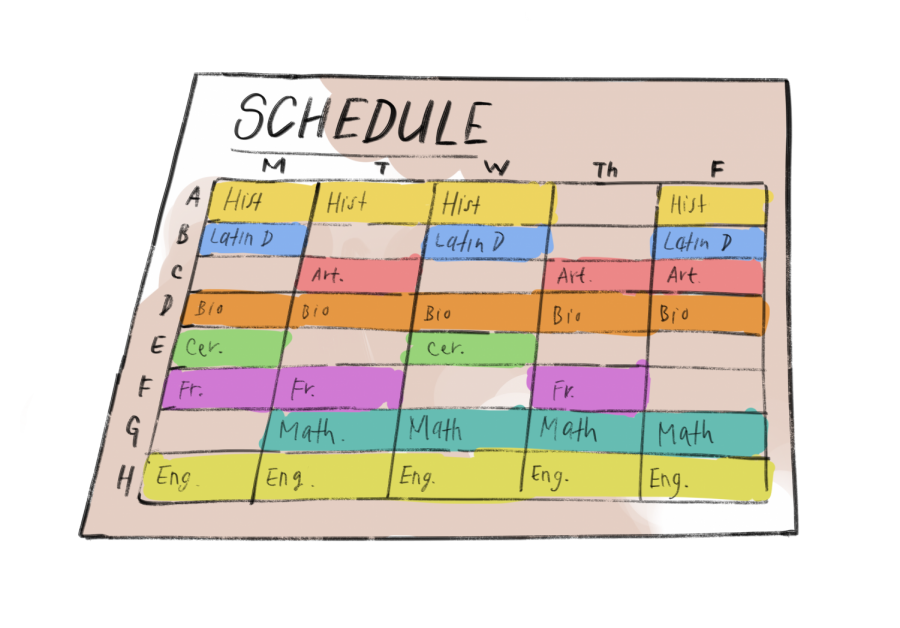 As Middle Division (MD) students continue to conduct their classes virtually, various changes in scheduling and potentially to grading systems have altered the structure of MD HM Online. As the administration has reached various scheduling conclusions, members of the community have expressed a mix of opinions on what grading and scheduling systems they believe to be most effective.

Since the beginning of HM Online, the MD has cycled through three different scheduling systems. “At first, we had no academic classes on Zoom, just advisory every other day,” Julia Lourenco (6) said. The MD then implemented 15-minute advisory meetings every day, and has since added two 25-minute classes per day as well.

Head of Middle Division Javaid Khan sent an email to the MD with the new schedules earlier this week. According to the email, the new schedules are split up between “A” and “B” class periods, each listed with time frames and class names. “A” and “B” period classes are divided into four parts, each lasting 25 minutes, and students attend a virtual class during one of “A” period’s sections and during one of “B” period’s sections. For the remaining 75 minutes of the period, students do independent work. From Monday to Thursday, after “B” period ends at 1:10, students can get extra help, attend activities, and have “Guidance Drop-Ins” or “Dean Drop-Ins.”

“Barring any unforeseen circumstances, this will be your schedule going forward,” Kahn wrote in the email. “Much like the other Divisions, the MD is a mix of synchronous and asynchronous instruction including two modified periods of live instruction for the Math, History, Science and World Languages, and additional opportunities for live advisory, PE, support, Dean’s meetings and Robotics,” Head of School Dr. Tom Kelly wrote in an email.

Isabella Ciriello (8) is satisfied with the new schedule. “It’s a good balance between doing independent work and still being able to ask your teacher questions,” she said.

Parents also recognize the importance of a virtual classroom setting. “Even just adding the extra 25 minutes on Zoom this week made a major difference for my son,” Aleida Hornfeld P’22 P’26 said.” [The students] get much more excited and engaged when they can see their teachers and friends.Even when they are physically distant, they are socially together.”

This new scheduling system is the most successful one thus far, Hornfeld said. Michelle Romero P’22 P’24 has noticed the success of the Upper Division (UD) system and would like the same for the MD, she said. “The students in the middle division would benefit from more human classes and teacher interaction,” she said.

Because Romero has witnessed the differences between the divisions’ systems, she shared her views with the administration. “I actually sent a note to Mr. Khan and Dr. Kelly because I had thought that they weren’t implementing more classes [on Zoom],” she said.

However, Kelly’s response made Romero realize that there were other factors behind the decision making process, she said. “I grew to learn that the teaching body [of the MD] had unfortunately been affected by COVID [more than other divisions], which was what prompted their decision to have fewer classes at first,” she said.

Even though Romero did not originally understand the rationale behind the MD scheduling, she is pleased with the amount of communication from the faculty, she said. “I recognize and appreciate that there is a lot that goes into a decision for all types of students in all types of scenarios,” she said.

In addition to changes to the class schedules, Kelly and Khan have been discussing the possibility of changing the MD to a Pass/Fail grading system.

On Wednesday, April 15th, Kelly held a virtual Town Hall to discuss the future of HM Online for MD students. During the town hall, Kelly made it clear that the administration was still deciding what to do about the grading system, Romero said.

Rosenberg was encouraged by the prospect of Pass/Fail grades. “It would get rid of a lot of pressure and worries about online school, because now everything is more stressful [due to the virus],” she said.

Khan and Kelly both declined to be interviewed about the possibility of a Pass/Fail grading system until they publicly announced a decision.

However, some parents want their children to receive letter grades on their report card. Romero said that it is important for all divisions to remain as consistent with one another as possible.

Even though many changes have been made and some details are still being worked out, Hornfeld supports the administration’s decision-making process, she said. “I trust that whatever decision the administration makes will be the right one.”