The road to recruitment: HM student athletes take the next step 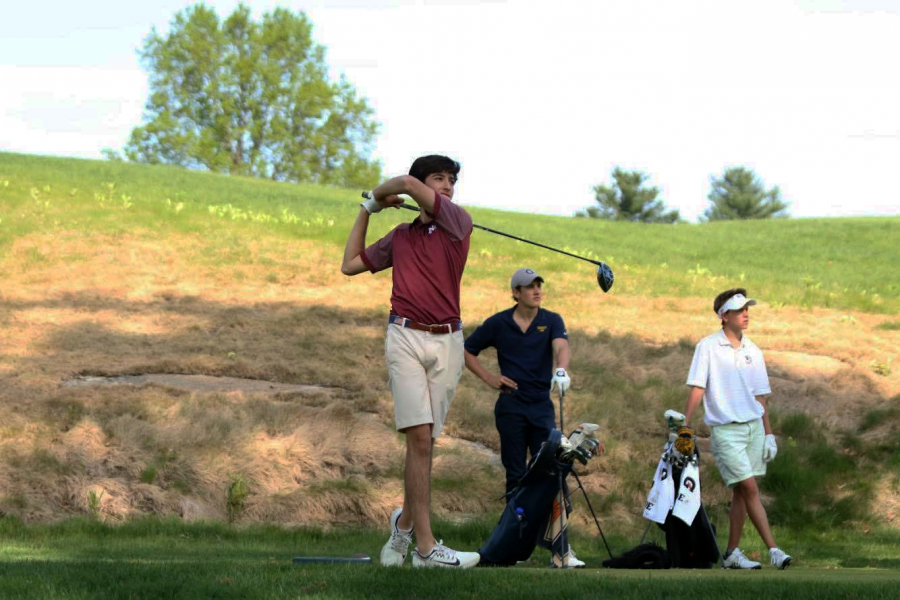 Since freshman year, Kiara Royer (12) has spent days at universities around the country, already knee-deep in the college process. She didn’t spend this time in a library, but rather on a soccer field, as coaches from prospective colleges watched her every move with a careful eye, gauging if she had what it took to earn one of the few spots on their varsity soccer team.

Royer, along with golfer Stephen Sloan (12) and squash player Lily Seckendorf (12), have had to juggle their academics and athletics and have all been recruited to play at the collegiate level in the fall of 2020. Royer will attend Williams College, Sloan will attend Colgate University, and Seckendorf will attend Brown University.

Getting recruited for colleges requires a large time commitment and constant work, Seckendorf said. All three athletes began playing their respective sports when they were young: Royer when she was three, Sloan when he was three or four, and Seckendorf when she was eight.

Throughout high school, each athlete spent time conditioning and attending tournaments, practices, clinics, and camps. Royer would spend hours playing soccer at such camps as coaches watched her, forming relationships with coaches from different colleges and feeling out different schools in the process, she said.

Seckendorf has distinguished herself in monthly tournaments around the country, which have allowed her to advance her national ranking, she said. Likewise, Sloan has frequently attended tournaments, even taking the third trimester of his sophomore year off for an intensive golfing program in Florida.

The recruitment process varies from sport to sport. For team sports like soccer, even if an athlete is qualified enough to join the team, their recruitment is ultimately dictated by each team’s needs at the time, Royer said. No matter how well she played, if a prospective college team did not need another midfielder, she would not get recruited, she said.

Many [squash] teams only recruit about three players per year, Seckendorf said. Lily’s commitment was verbal, meaning that her acceptance was not official until she got in Early Decision, Seckendorf said. “Even after I committed, I needed to maintain my grades and performance in tournaments, especially because most college squash teams have a high required academic index for incoming players,” she said.

Sullivan also coached Sloan. While most of his out-of-school competitions were individual, Sloan played on the school’s golf team last year. Sloan was then ranked as the second-best golfer in the Ivy Preparatory League and was projected to reach first this season, Sullivan said.

These athletes have not been alone through the recruitment process. Sloan, Seckendorf, and Royer have been supported along the way from all sides.

“Everyone at the school has been so supportive of helping me through this process, including Dr. Kelly, Dean Levenstein, Dr. Delanty, Coach Sullivan, and Coach Annunziata, among many others,” Sloan said. “The school has been very understanding throughout my time here about missing school for tournaments,” Seckendorf said.

The athletes’ parents helped them in the process as well. “My parents have been extremely supportive, especially with all the travel involved in going to soccer tournaments every weekend, and I’m really grateful for them,” Royer said.

Similarly, Seckendorf also appreciates her parents’ dedication. “The number of random places that squash has brought my family to is absurd,” she said. “We’ve stayed in more Marriotts in rural Ohio than could be healthy for any family.”

However, not everyone is as supportive of athletes going through the recruitment process. It was crushing to hear that some of her friends attributed her success to “luck,” Seckendorf said. “I did not find myself in this position because of luck; I pushed myself into this opportunity through a decade of hard work and sacrifice, and thankfully, it paid off.”

Indeed, there are many misconceptions about recruited athletes, Royer said. Royer, Seckendorf, and Sloan have found that some of their friends believe that recruited athletes do not have to work as hard in school. Ultimately, “[athletes] have to constantly juggle maintaining good grades and a high performance in [their] sport in order to potentially play at the college level,” Seckendorf said.

Sullivan said that the recruitment process “almost feels like it’s twice as hard” as the normal college application process. “They don’t take shortcuts, they work as hard as they can, no matter what they’re doing. And I think that’s why they have incredible success,” he said.