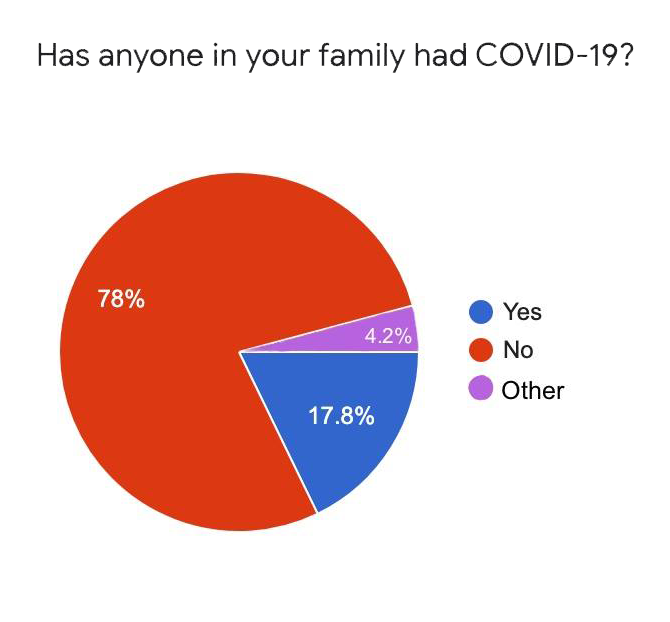 Although 1.92 percent of people in the New York City area have contracted COVID-19, according to the New York Times, the self-reported rate at the school has been been over two-fold of the city’s: in an anonymous poll sent out by The Record earlier this week to the Upper Division students and faculty, 4.9 percent out of the 264 people who responded to the survey said that they had contracted the virus.

Isabel Mavrides (9) contracted COVID-19 and went through stressful times with her family who all simultaneously had the virus. Mavrides first experienced tightness in her lungs, which she attributed to her asthma. She later suffered from a high fever and nausea, which are typical symptoms of the virus, according to the Center for Disease Control (CDC). After developing these conditions, Mavrides went to City MD and received a nasal swab test for COVID-19, for which she tested positive.

Ethan Waggoner (10), who also had the virus, experienced the testing process slightly differently, since he wasn’t able to get a test right away. Both he and his mother initially had mild fevers and sore throats, so they went to their doctor hoping to receive a note that would permit them to receive a COVID-19 test, he said. However, when their doctor denied their request, they drove to a testing site in New Jersey to see if they could get tested. “The testing site wasn’t busy, and when they looked in our car, they could see how sick we clearly were, so they let us get tested, which was an extremely kind gesture,” Waggoner said.

“The testing site was in a parking lot, but it looked like a military base with the big white tents,” Waggoner said. “All of the workers were dressed in full body suits and were very efficient with the entire [testing] process.” Waggoner and his mother were told to keep their car windows rolled up until they arrived at the swabbing station, he said.

“The swabbing was an extremely unpleasant experience, leaving you tearing up afterwards because of how far up the nostril they swab,” Waggoner said. “You have to keep still during the swabbing, so I held my mom’s head as they swabbed her because she kept moving.”

Although Waggoner was told he would get his results in two to three days, he received them almost a week and a half after his test, he said. “By the time we got the results, we weren’t as nervous because our symptoms had almost completely gone away.”

When Mavrides’s test results came back positive a week later, she was particularly nervous because she recently had surgery. “I knew my immune system was down so I didn’t know how that would affect me,” she said.

Waggoner, like many others at school affected by the virus, has a parent with a dangerous health condition which puts them at a greater risk, so Waggoner isolated himself from his parents, he said. While in isolation, Waggoner FaceTimed with his girlfriend, studied, and exercised to the best of his abilities, he said. “As a runner, it’s weird walking up stairs or getting out of bed and feeling out of breath and exhausted,” he said.

Once Waggoner recovered, he, like many students, stayed inside, occasionally went grocery shopping but avoided others at all times, he said. Now, he wakes up around four or five in the morning to go on runs simply because the streets are the emptiest then.

Since Mavrides and her family all became sick together, they did not know exactly how to take care of each other, she said. Although she had to go to the Emergency Room (ER) one night, due to low oxygen levels, and her father was removed from her home due to his condition, her family stuck together through it all, Mavrides said.

Similar to Mavrides, Nora Balidemaj (11) and her family all contracted COVID-19 and had to quarantine themselves together in their house. “We usually don’t spend that much time together, so we all needed our own space for most of the day,” she said. Though the virus did not impact her severely, it affected her father badly, which was hard to see, she said. While she, her mom, and sister all only had high fevers, her father had a bad cough in addition to lung issues, she said. Balidemaj and her family presume that her father first got the virus from one of his patients.

Talia Winiarsky (11) feels fortunate that after her father tested positive for COVID-19, her family was able to take care of him, since both her parents are doctors, she said. “My mother ordered a pulse oximeter, which measured his oxygen, and he improved his breathing with an incentive spirometer, two instruments that my parents had experience with in their jobs,” she said. Her father isolated himself in a separate bedroom for three weeks, and Winiarsky and her brothers would FaceTime him when he felt up to it, she said.

Similar to Winiarsky, whose dad had the virus, Alexis Stein’s (11) parents also contracted COVID-19. Her dad lost his sense of taste and smell and experienced a high fever, which her mom also developed later, she said. “Once my dad developed a few symptoms, he got a test,” Stein said. “After learning that he had tested positive, he was able to take care of himself quickly.” Though her parents do not know exactly where they contracted COVID-19, Stein believes they could have come in contact with it through a package or through public transportation.

Stein feels that her parents’ experience happened at the best time, since she did not have to juggle schoolwork and could instead only focus on taking care of them. Her brother, Sam Stein ‘18, was also home from college, which lessened the workload. “It was nice having my brother here [while my parents were sick], so that we were able to manage it together.”

Though initially it was disturbing to see her parents affected by the virus, Stein and her brother tried their best to take care of them while also making sure they stayed safe. “I would bring their food to them on a tray, and after they were done eating, they would leave it outside their room and I would wipe everything down and throw it out,” she said. She would also do their laundry, and wash their clothes with both gloves and a mask on, she said.

Even students who do not have the virus still experienced hardships. Although Tomoko Hida (10) and her family have not tested positive for the COVID-19, she has also experienced difficulties with her family, since they were quarantined in the Tri-state area for the past few weeks, while their parents had been staying in Japan for work since January. Hida’s grandmother had been living with them but returned to Japan for her own safety right before spring break, she said. Hida did not accompany her as she anticipated that school would open after spring break.

However, once school closed on March 9, Hida and her sister stayed at Mazyar Azmi’s (10) house, since they could not live by themselves without a legal guardian, she said. As New York City slowly became the epicenter of the virus, Azmi’s house in New Jersey seemed safer than her apartment in the city, she said.

After staying with the Azmi’s for a couple of weeks, Hida and her sister went to Japan last week to stay with their parents. At Narita International Airport in Tokyo, they both disembarked the plane in small groups and were put through an organized assembly line to get a COVID-19 test. Neither of them tested positive for the virus, but since it was an initial test, she still needs to be careful just in case she does have it, she said.

Many students like Hida also suffer emotional pains when coping with the burden of knowing that their parents, as healthcare workers, are exposed to the virus each day at work. Karina Iman (11) is one of many students with at least one parent who risks their life each day by working in a hospital. Iman’s mom, who is an ER doctor at St. John’s Riverside Hospital in Yonkers, has seen several patients who have had COVID-19, despite working at a relatively small hospital.

According to Iman, many of the patients who go to the ERs are senior citizens from nearby nursing homes as well as people affected by COVID-19 with underlying health issues, she said.

As the outbreak continues, the shortage of personal protective equipment (PPE) is a growing global concern impacting healthcare organizations, according to the Food and Drug Administration (FDA). Iman’s mother experiences the lack of available PPEs at her hospital, she said. Instead of official equipment, many doctors at St. John’s are using supplies that they had before the pandemic to protect themselves, Iman said.

“My mom has a couple of masks that she uses during the week and she rotates through so that she doesn’t have to use the same one constantly,” Iman said. Other professionals who do not have access to PPEs often only have their scrubs. This lack of protection can further spread the already contagious virus, she said.

In order to curb the spread of the virus, Ryan Finlay’s (10) father, who is also treating patients with COVID-19, has been going through a rigorous disinfection procedure when he returns home from work. As soon as Finlay’s father arrives home, he immediately washes his clothes, takes hard items like his phone and wallet and places them in a UV light box to kill bacteria and viruses, and showers, he said. To cope with the emotional burden of the virus, Finlay’s family has meals together every night and tries to distract themselves by watching movies.

Alex Nagin’s (10) mother is also an essential healthcare worker. “She takes care of pregnant women in hospitals who are giving birth, helps deliver them, and makes sure that they are staying safe from the virus,” Nagin said.

Both Nagin and Iman’s mother do not stay with their families, though neither has COVID-19. “Although she visits at a distance once every few days, I miss seeing my mom daily,” Iman said. “It’s kind of lonely without the other person in your house.”

Nagin, who has moved to his grandparent’s house in rural California, has not seen his mom since he left New York City. “It’s definitely very unusual because I have gone long times without seeing her before, but never in a circumstance like this where I’m not allowed to see her,” Nagin said. He does keep in touch by FaceTiming her every day. Despite the physical separation, Nagin and his family recognize the important work she is doing for New York, and are extremely proud of her, he said.

“As hard as this experience has been, it has taught me valuable lessons,” Stein said. “It taught me that I am more capable of taking care of the house than I expected I would be.”

After fully recovering from COVID-19, Mavrides felt relieved. “I think it’s taught me how to be proactive about worrying about your symptoms and about taking care of yourself,” she said.