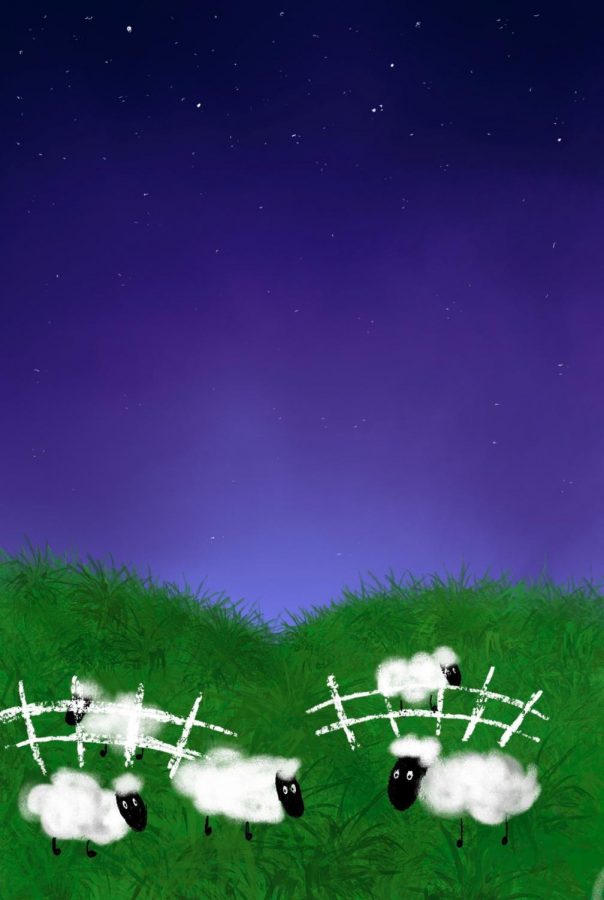 Determined to make it to her destination, theater teacher Haila VanHentenryck climbed up the steepest side of a mountain. Except the mountain was a sand dune. Made of ice. She made her way up the jagged cliffs, her feet falling through the ground. She was slipping, unable to gain traction. The ice broke underneath her shoes. Gasping for breath, she thought she wouldn’t make it. Then she woke up.

According to an article published on Monday, April 13 in The New York Times, the number of Google searches for “Why am I having weird dreams lately?” has quadrupled in the United States over the last few weeks. During this time, the majority of people’s dreams have become both more vivid — featuring unfragmented, cohesive, often bizarre stories and events — and more frequent, the article wrote.

In a school-wide anonymous survey sent out earlier this week, over 60 percent of the 136 student and faculty members who responded reported that their dreams were becoming more vivid over the time that they have been in social isolation.

During the past few weeks, Ryan Finlay (10) has found himself stealing trucks, while Lily Seckendorf (12) was chased by a bear. Regardless of the content of the dreams, 57 percent of respondents reported remembering multiple dreams per week.

As a result of the pandemic, people’s sleep patterns have changed in a number of ways, Psychologist Dr. Ian Pervil said. “Longer nights of sleep generally increase the number of REM cycles, and people dream during REM cycles, so there is a greater likelihood of having dreams with more sleep,” he said. “Conversely, greater anxiety might lead to more wakeful, restless sleep, when dreams might be remembered more.”

Athena Spencer (9) said that disruptions in her regular sleep patterns allow her to remember her dreams. She hasn’t been sleeping as well as she usually does, so waking up in the middle of a REM cycle causes her to remember the dream she was having, she said.

Spencer cannot attribute details of her dreams to real life events. She recently dreamt that the Acropolis of Athens was being hidden inside of a cave and that it was her responsibility to find it. Although this dream does not pertain to anything that has recently happened in Spencer’s life, she can recall the dream with an accuracy that was not present before the pandemic, she said.

Riya Daga (9) said that the quantity of her memorable dreams has increased as a result of her new morning routine, she said. “I used to wake up and go straight to getting ready because I didn’t have that much time,” she said. “Now, I can wake up and look at my phone and relax for a few minutes, so I feel like I have more of a chance to remember them.” Daga recently read an article that explained that much of a person’s ability to remember their dreams is based on their actions only seconds after they wake up. She recognizes that this may be the cause of her frequent memorable dreams; she can now process what happened as she slept when she has just woken up, she said.

An article published in the Boston Globe on Friday, April 24 titled “You’re not the only one having vivid dreams in quarantine” confirmed the pandemic’s psychological effect on dreaming. In the article, dream researcher at Harvard Medical School Deirdre Leigh Barrett answered a list of questions presented by readers. “Any big life change tends to stir up one’s dream life and result in more and more vivid dreams,” Barrett said. “The shelter-at-home situation is a big life change.”

Barrett specifically explained that dreams pertaining to themes of the virus occur because of the stressors felt during this historic, often emotionally difficult, moment in time. “This could be our mind’s way of working through the trauma,” she said.

Theater teacher Benjamin Posner has specifically felt his anxieties about the virus become more prevalent in his dreams, as Barrett explained. He has recently been having dreams in which he discussed the virus with people he knows. Although he can’t recall the exact details of the dreams, he understands that they come from a place of anxiety surrounding the pandemic, he said.

Daga, too, has found herself dreaming about the virus. She recently had a dream that she was a chemist who found and created a vaccine for COVID-19, she said.

In the article, Barrett wrote that although mentions of the virus may not be present in dreams, fears surrounding it can manifest themselves in metaphors and symbols within the dreams. Tiger Lily Moreno (12) has noticed this “metaphor” phenomenon in her own dreams. She recently dreamt that an entire street was deserted and desolate; every storefront was closed and barren. The restaurant in which she was having dinner suddenly became empty. “This dream wouldn’t make sense pre-coronavirus,” she said. “It would be too obscure. Now, a world like that is a thinkable possibility.”

Moreno attributes this conjuring of the virus to the lack of other stimulus in her present day-to-day life. “The only thing stimulating my brain besides online classes is the news of the virus,” she said. Since there are not many things for us to think about and pay attention to besides the coronavirus, it makes sense to Moreno that her brain will start to incorporate that anxiety into what she thinks about at night, she said.

Posner’s dreams have also incorporated anxieties surrounding the virus without directly referencing the pandemic. Recently, he had a realistic and strikingly dramatic dream in which he was unable to throw a party that he had planned, he said. “I sent out an invitation for a party, and before I knew it people were responding, which I didn’t necessarily expect them to do,” he said. “I looked down at my watch and I’m thinking, ‘Well, there’s no way I’m going to be ready for this.’ I didn’t have any of the party supplies.”

Directly after Posner woke up from this dream, he credited its stressful nature to his experience teaching online, he said. Posner said that he related its theme of performance anxiety to the anxieties he has experienced as a faculty member during HM Online, very similar to the way he has felt in acting roles he was unprepared for in the past. However, as he continued to analyze the contents of the dream, he realized that there were many connections between the narrative and his family’s recent troubles grocery shopping. Posner has recently been worried about ensuring that he has enough of what he needs from the store, and he believes that fear prompted the lack of party supplies in his dream, he said.

Unlike Spencer and Daga, Carmel Pe’er (11) has been experiencing surprisingly normal ways of life in her dreams, she said. Pe’er has had a recurring dream about receiving a take-home test during math class. “The feeling of being at school was really real,” she said. “I could see the whole classroom and all the other ten kids and Mr. Worrall. Even the whiteboard was in the same place.” Similarly, Seckendorf, who has found that she never dreams about the virus, recently had a dream that her and her friends were at graduation as planned.

Although these dreams may feel unnatural or anxiety-inducing, it may just be a body’s way of working through the stress, Pervil said. “There’s some research to suggest that, in dreams, individuals sometimes attempt to work through the problems in their lives, he said. “Because we’re all in the middle of a pandemic, we all are suddenly faced with a new, challenging, and quite difficult set of problems. It would make sense that we are trying to find solutions or even ways of dealing with the problem as we sleep.”