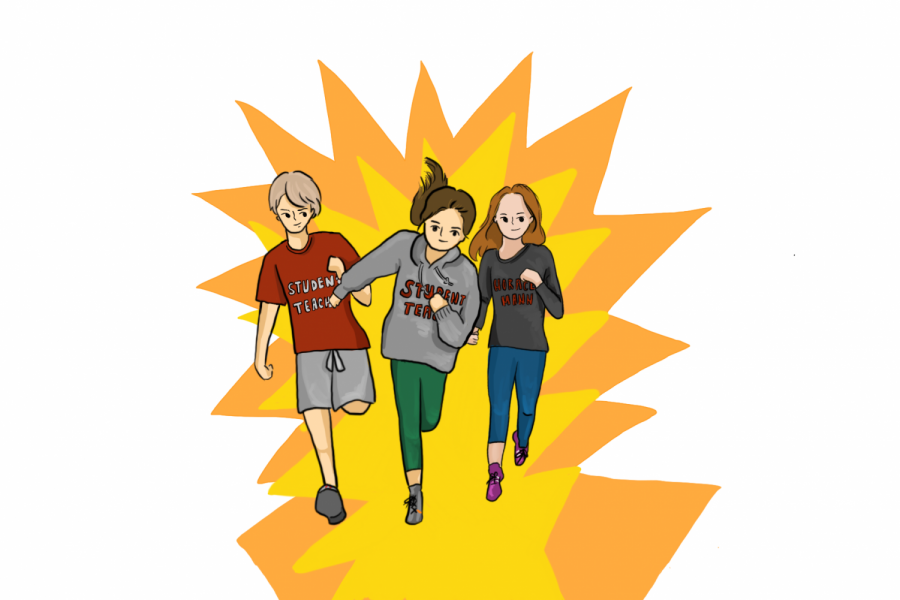 Over Zoom, three-year-old Kiera McNally, history teacher John McNally’s daughter, took Vivien Sweet (11) on a virtual tour of her house, after they read books together. It was the first of many meetings between Upper Division (UD) student volunteers and teachers’ children as a part of the new Student-Teacher program, an initiative started by Simon Schackner (10).

Volunteers entertain teachers’ children so that teachers can focus solely on teaching, Schackner said. “It’s really hard for teachers to manage both their kids and their work, especially since they’re on Zoom for a majority of the day,” he said. “With Student-Teacher, it will allow teachers to not have to worry about their kids since they’ll be entertained by students.”

Schackner (10) proposed the program at the school after his friend from camp, Henry Segal, implemented the program at his own school, the Kincaid School in Houston, he said. According to the website Segal created for the program, “Student-Teacher is a service designed to support a school’s faculty by providing virtual engagement with their children.”

Students have been eager to participate in the program. “I know a lot of teachers who have younger children, and I’m sure that [it] must be difficult for them to have to worry about what their kid is doing when they are teaching a class, so I thought that it would be a really fun and helpful activity,” Diana Shaari (12) said. “Now that it’s my senior year, I’m trying to help out as much as I can in my last few weeks at the school.”

Noah Phillips (12) felt obligated to help out in any way he could, he said. “During this time, teachers have been managing a lot, especially those that are parents,” he said. “So helping them out in this way is just a small thing that I can do.”

Teachers in all divisions of the school can sign their children up for the program, Schackner said. Currently, five teachers have signed up and 48 students have volunteered, he said. In the future, Schackner plans to expand the Student-Teacher program so that UD students can entertain LD and ND students as well.

“I signed up for the program because, at times, my wife and I are working at the same time and cannot be completely present with our three children,” McNally said. “During the session, Vivien and my youngest child read the book Daniel Tiger and talked about the author and illustrator. Later, she helped my middle child, Livvie, with her homework, and they watched a BrainPop video together, and then she had a house tour with Kiera, my youngest.”

Students filled out a form indicating some activities they were interested in doing with the children and then were paired with a child, Schackner said. Sam Sladkus (12) made up dances with mathematics teacher Linda Itani’s four-year-old daughter, Natalie, after Itani gave Sladkus a list of Natalie’s favorite songs, Sladkus said. “I’ve been on a dance team for 10 years, and Natalie loves dancing, so it was the perfect pair.”

Itani said that it was nice for Natalie to get some interaction with someone who was older and outside her household. The sessions have helped keep Natalie entertained, and she looks forward to each session with her new friends, Itani said.

Last Wednesday, students who signed up for the program had a meeting with Head of School Dr. Tom Kelly to go over online etiquette and possible scenarios, Sladkus said. “He discussed certain situations that may occur, like when children run away from the camera, as well as situations in which we need to alert an adult.”

Pascale Zissu (11) suspected that Zoom would make it more difficult to connect with the children. However, this has not been the case, she said. “I think that Zoom hasn’t changed our ability to talk to each other, which is an important activity when hanging out with kids,” said Zissu, who also was paired with Itani’s daughter. “We were still able to dance and color together.”

After two months of Zoom teaching and Natalie having two daily Zoom classes of her own, Itani was confident that making a virtual connection was possible, she said.