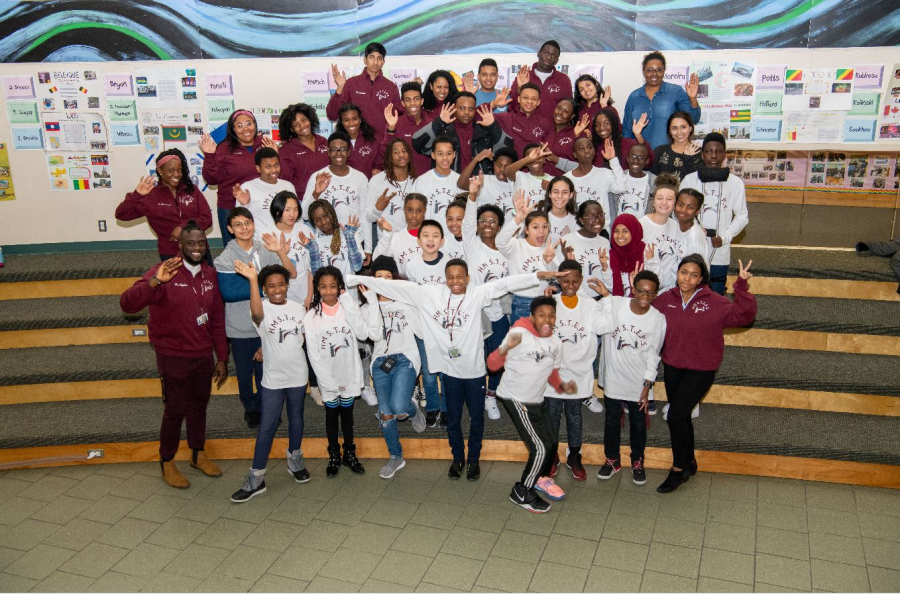 Despite America’s historic and pervasive racist, classist, and sexist legacy, a mentoring program that brings together high school and middle school students of color proves that when students of color are given space to be their full self, they can ultimately thrive in, rather than simply survive, school, said MD History teacher and STEPS co-Director Ronald Taylor.
The Students Together Empowering People of Color Successfully (STEPS) program “shows students of color at HM that they deserve to be here, they are equipped to be here, and they have no business limiting or truncating their shine to make other people feel comfortable,” Taylor said.
In STEPS, supportive and collaborative relationships are fostered even beyond those who directly participate in the program, STEPS co-Director Kimberly Joyce-Bernard, of wrote in an email to The Record. “This program is multifaceted as students, faculty, staff, and families collaborate in order to cultivate the social, emotional, and academic capacities that middle division students of color need in order to thrive in this predominately and historically white institution.”
Jaden Richards (11) said he had a rough time fitting in in middle school. “I don’t exactly fit into the mold of a typical Horace Mann student,” he said. When Richards came to the school in the seventh grade, he was one of about 10 other black kids in the grade, he said. Richard said that his experiences, opinions, values, and tastes felt completely different from those of his peers, so he always felt out of place. “My family is by no means wealthy. Nor was I raised in an ‘American household.’” Richards also thought if racial slurs and jokes demeaning families of lower social classes were normalized, then maybe he did not belong, he said.
Before Richards applied to become a STEPS mentor towards the end of his freshman year, he did not even know that the program existed, he said. “My history teacher, Dr. Milkes, sent me an email telling me that she thought I would be a good fit for the program,” he said. “As I was reading about [STEPS], I realized that I would definitely enjoy it, so I applied.”
“Now that I’ve got my footing, however, I’m in the place where I can help other students get their footing as well and help develop a safe space for a lot of students of color.”
Though her friend gave glowing reviews about the program,Christine Tao (8) said she was initially skeptical, but soon came to understand their perspective. “What makes the program so nice is the safe area that it gives its students,” she said. “We really can converse about any of our issues without facing judgement.”
Brooke Huff (6) joined the program this year as a new student to the school after hearing positive feedback from her older sister, she said. “I am hoping to get out friendships, extra support, and a great experience at my new school that I just joined this year.”
Richards said that one of his favorite memories involved two girls divulging troubles in their Spanish class. He explained that they were talking about how they could barely speak Spanish, but the way they were describing the scenario was really funny, he said. “By the end [of the session], everyone was laughing.”
In 2017, Deveraux Mackey ‘19 worked with the school to develop the program after proposing it as an Alexander Capelluto Grant during her junior year. The Capelluto grant awards up to $2,500 to a sophomore or junior who best develops an idea to make the world a better place. At Taylor’s previous school, he said he ran a program similar to STEPS. He missed supporting students in that way, so he agreed to join as an advisor. STEPS is the reason that Taylor continues to work at the school, and it is what motivates him to wake up every morning, he said.
The program has helped advisors, mentors, and mentees alike, Taylor said. “STEPS offers mentors life skills training on how to speak truth to power; a skill set that the 21st-century workplace will need as colleges and industries become more diverse. ”
Taylor said STEPS has helped him mature as well. “Deveraux showed me that despite coming from teaching in high needs and inner city settings and not being a product of NY elite independent schools, I could still have an impact in these spaces by serving as a conduit for students to speak truth to power,” Taylor said.
Despite the COVID-19 crisis, program leaders have found ways to continue the program, by conducting weekly Zoom check-in meetings with mentor and mentee, and inviting families to check-ins every two weeks, Taylor said. During family meetings, the leaders have curated specific programming to support students and families with the socio-emotional challenges that COVID-19 has highlighted, he said.
“I hope that the program will return to a more unstructured format,” Tao said. “That would make sessions easier and more productive, since we can just talk to each other.”
For Taylor, the most important thing for the future of STEPS is for it to become an endowed HM program. “As the program grows to being a full N-12 model, it needs to sustain so that students and families at all aspects of our pipeline can see that students of color belong at HM and make it a vibrant community,” he said.
Since its development, STEPS has served as a model by showing that a student’s voice, when listened to, can ignite changes across an entire community, Taylor said. “STEPS has shown the HM community that we need to continually make space for students to feel and operate as their true selves—that is education.”