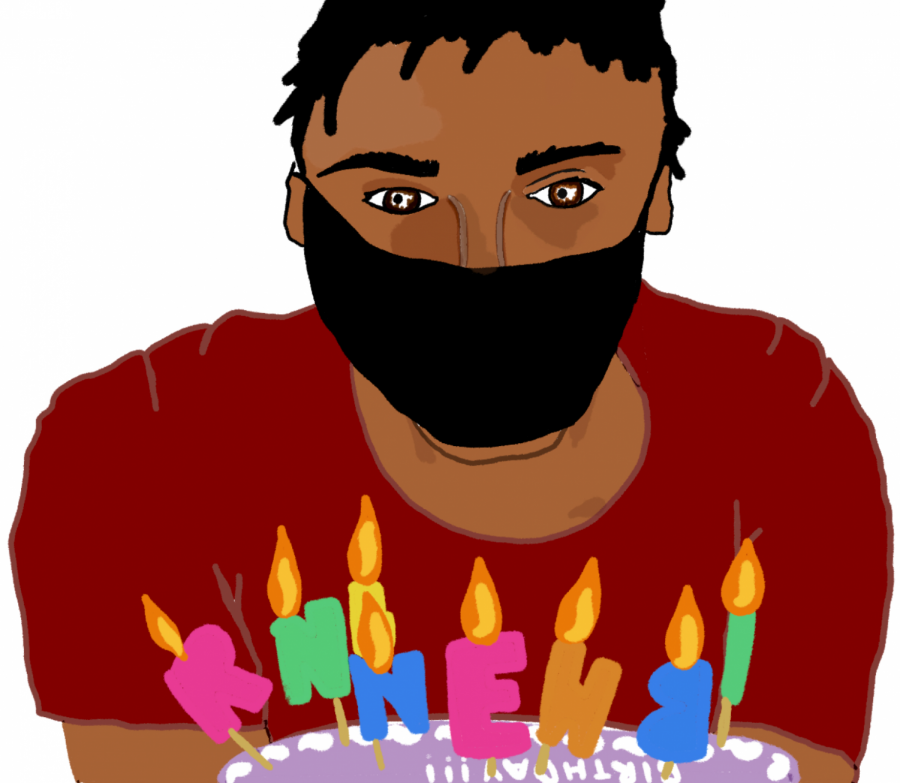 Unable to celebrate in person with her friends, Carmel Pe’er (11) blew out the candles of her Lloyd’s cake while in quarantine with her family. Despite the constraints of the lock-down and social distancing, students are still finding ways to celebrate their birthdays with friends. The quarantine has prompted many to move their birthday festivities to a new venue: Zoom.
Pe’er said she had mentioned offhand to one of her friends that she missed the taste of the carrot cake from Lloyd’s, as it is a staple for many HM students. “It was super sweet, especially since I completely forgot telling her that one thing I miss about school is Lloyd’s,” she said. The gesture carried on a birthday tradition Pe’er and her friends have at school of bringing each other a birthday donut and lighting a candle. “Even though it wasn’t a donut, it was very thoughtful and made my birthday seem more normal,” Pe’er said.
Jordan Ferdman (11) does not consider herself a “birthday person,” but this year, on the day before her actual birthday, her close friends threw her a surprise party on Zoom, she said. Ferdman’s friends convinced her that they were going to watch a movie together, and she was surprised when she joined the Zoom call and was welcomed by 10 people wishing her happy birthday, she said.
Catherine Mignone (10) was also surprised on her 16th birthday, she said. With the help of Mignone’s friends, her younger sister arranged a surprise Zoom birthday party. Mignone’s sister called Mignone from another room and walked in not expecting to see a computer screen filled with her friends, Mignone said.
The new online format of her birthday party gave Mignone the opportunity to explore non-traditional birthday activities like a game of Kahoot and Sketch.io, an online game similar to pictionary, she said. Ferdman’s friends also set up a virtual game of Jeopardy, and the categories were based on Ferdman’s likes and dislikes, she said. Ferdman said they tried to use features such as screen sharing that do not work with in-person communication.
Similarly, Pe’er celebrated her birthday in new ways, including dinner with her family, walks with two of her friends while maintaining distance, and two zoom parties with different groups of friends.
Morgan Bart (9) had a lot of classes on her birthday, but she was able to find time to talk with her friends and hang out with her family, she said. During quarantine, Bart has not been able to see her friends in person but enjoyed how her surprise Zoom birthday party allowed her to further reconnect with them as a group. “It was really fun talking to my friends over Zoom, because I haven’t talked with a lot of them because of classes,” she said.
Similar to Bart, Rowan Mally (10) was unable to see friends in person, but he received virtual birthday messages and enjoyed a homemade birthday cake, as he was unable to purchase one, he said.
For many, the severity of the pandemic was unanticipated and people did not expect their birthday plans to be affected to this extent.
“When it was March, and I just left school, I was not concerned about my birthday,” James Thomas (10) said. For him, the quarantine was very unexpected and resulted in a change to his previous plans, he said. Thomas had already organized a birthday party and planned to bring his friends to a restaurant, but, before he could send invitations, Governor Andrew Cuomo announced the closure of New York State, he said.
Instead of having his originally planned party with his friends, Thomas celebrated differently. He and his family went to McDonald’s for the first time since quarantine started, followed by a trip to Carvel where a personalized cake was waiting for him, he said. However, quarantine made his birthday seem less exciting than usual. Thomas said, “I woke up and it was my birthday and I’m like oh, I’m still inside.”
While the quarantine affected Thomas’ birthday plans, many people were not affected, because they had not planned that far in advance. “I wasn’t really thinking that far ahead,” Ferdman said. “But when it became clear that quarantine was going to extend past my birthday, I suppose it occurred to me that it might be nice to do in a call,” although she said she did not take any steps to make that happen.
For Mignone, turning 16 was supposed to mean getting her driver’s license. However, she was unable to, as the Department of Motor Vehicles (DMV) was closed due to the pandemic, she said.
Although Bart, Mignone, and Ferdman all received gifts in the mail from their friends, they faced concerns about receiving packages. “I got presents from a few friends but the issue is that a lot of families aren’t accepting packages right now, and so a lot of people wouldn’t or don’t send things,” Mignone said. One of Pe’er’s friends ordered a gift online and had it delivered to her address, but most cards were sent to her over text or social media. Thomas received an in-person birthday surprise from a friend from camp. “[He] actually pulled up outside of my house with Taco Bell and a little card that said ‘Happy Birthday, JT,’” Thomas said. The food and the card were on top of his friend’s car for him to go outside and take.
Pe’er’s mom also celebrated her birthday in quarantine. Pe’er said her dad surprised her mom with dinner from her favorite restaurant and arranged a Zoom call with some of her friends. After dealing with the restrictions of the situation, many have realized they can still have fun with friends and family, just from different locations, Mignone said. Bart said she will “definitely” celebrate again if quarantine continues into next year. “Even though everything is kind of canceled right now, we can still have a fun time with our friends and with our families,” Mignone said. “It just happens in a different space.”