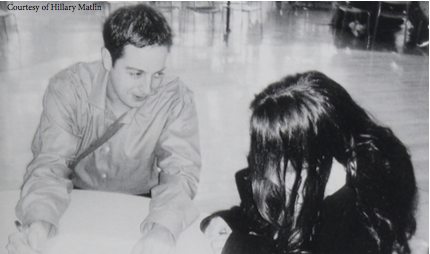 Over his 15 years at the school, departing math teacher and former dean Nicholas Perry has learned countless lessons from both colleagues and students. “One of the great hidden truths about teaching is you learn as much as you teach, and there’s nobody better to learn from than HM students,” Perry said. “I’m grateful to all the teachers I got to teach next to, and I’m grateful to all the students who I got to share a community with.”
Ben Goodman (12) said that Perry’s lessons were incredibly valuable to him. “Mr. Perry taught me that, not only in math, but also in life, there are many ways to find solutions to difficult problems, and I thank him for teaching me that every day,” he said.
Lauren Port ‘19 said she found Perry to be an influential teacher both in and out of the classroom. “He would personally reach out and treat you like family,” she said. “He was someone that I could not only have a silly chat with in passing, but he was also someone I could confide in during my time at school.”
Similarly, Goodman felt that he could talk to Perry about anything. “He is always there when you need someone to talk to, and it’s important for teachers to be an essential resource for students,” he said.
The school would not be complete without Perry, Pascale Zissu (11) said. “He has been such a positive, welcoming presence,” she said. “He has made me feel safe and comfortable being my authentic self.”
A highlight of Perry’s teaching career at the school was when his students would register their accomplishments, he said. Perry has seen many of his students recognize their achievements, but watching them do so does not grow old, he said.
One thing that Perry teaches his students is how to be comfortable and self-confident in the classroom, Zissu said. “Coming from the lower-level math in middle school, I felt insecure in my math abilities,” Zissu said. Her mindset changed after she took Perry’s class, she said.
Perry also teaches his students to try new things and take risks, Zissu said. “He has taught me to be okay with taking academic risks and making mistakes.”
“Mr. Perry has taught me that it is okay to ask for help if you need it,” Bryana Guerrero (12) said. “He taught me how to have self confidence in a math classroom, which is something I will forever be grateful for.”
Perry also has been a mentor, both officially and unofficially, for many members of the math department, math teacher Brianne Gzik said. “He offered sound advice, gave me many pointers, and made sure to really get to know me as a person,” she said. “I appreciate how welcoming he was and how he took the time to make sure that HM felt like home.”
One special feature of Perry’s classes is his testing policy, Catherine Zhang (11) said. His assessments were untimed and never officially called tests. “He understands that tests can be stressful and proposed other methods like PSets [problem sets] to check in and make sure we’re learning,” she said.
Perry’s testing policy shows how much he cares about his students because he is willing to change the way he runs his class to make his students feel comfortable, Zhang said.
Perry’s thoughtfulness and caring nature stood out to Guererro, she said. “When he can tell that students are having a tough time, instead of pushing work onto them and making it worse, he does all he can to make us feel better.”
“Perry always makes sure his students understand the concepts behind the lessons,” Gzik said. “It’s super important to me that my students always understand the ‘why’ behind math, and Mr. Perry is very talented in crafting lessons, explorations, and problems that do just that.” For this reason, Gzik said she loves using Perry’s lesson plans.
Teaching Algebra 1 specifically was one of the highlights of his time at the school, Perry said. “I enjoyed getting to work with students in that class who were bright and capable and curious and smarter than they themselves knew.”
Perry was able to give these particular students a chance to understand math in a way that they may not have been able to before, he said. “The challenge of getting to do that for them was awesome,” he said. “I had to raise my game for them, and the satisfaction of me getting better and them getting better at the same time was cool.”
Port said that Perry’s passion for math and teaching is evident to his students, and he cares about each and every one of them very much. “The most important thing he’s taught me is to not be too hard on yourself and to, no matter what, always be a good citizen,” she said. “He really has shown me what it means to be unconditionally kind.”
In the coming months, Perry, his wife, and his son are moving to Princeton, New Jersey, where he will teach at a new school, he said. “I think it’s going to be a really great change of pace for us as a family. As much as I love Horace Mann, I’m excited to see how another school works and see what’s the same and what’s different,” he said. “This is the next step and we’ll see what happens. I’m excited for it.”