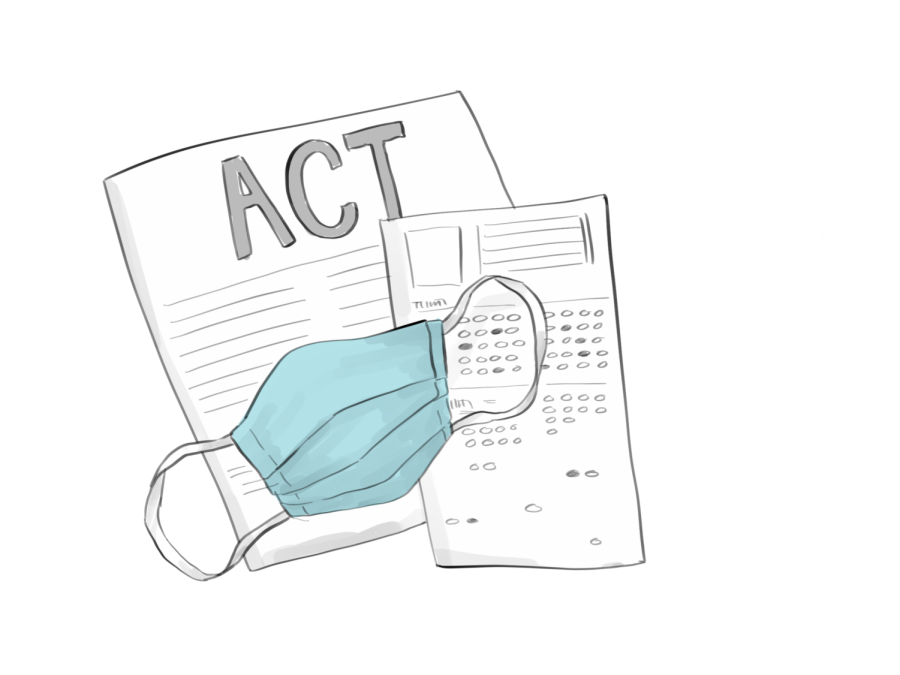 Beginning in March and continuing through the summer, the College Board and ACT closed test centers across the country due to safety concerns surrounding COVID-19, leaving many students stressed and unable to take a test.

Usually, colleges require applicants to submit either an SAT or ACT test score, which evaluates particular skills a student may need in college. However, this year, more than 1,400 colleges — including both large research universities and smaller liberal arts schools — have decided to go test-optional because of the numerous cancellations and the number of students unable to test.

“This means that [colleges] will not require test scores from applicants and will not hold it against those who cannot or decide not to submit test scores,” Executive Director of College Counseling Canh Oxelson said. “Hopefully, our students take advantage of this flexibility.”

Max Migdon (12) signed up for the SAT in May and June, but both tests were canceled. “It was frustrating to have prepared just for the tests to be canceled,” he said. “While not required, I am anxious that not having a test score will put me at a slight disadvantage because it is one less thing for colleges to grade me on.”

Abigail Morse (12) said that she feels like she cannot compete with another applicant if they score high and she does not have a score, even if tests are optional. “I am slightly worried because I hoped that the score would improve my college application,” she said.

Leyli Granmayeh (12) said she spent copious amounts of time studying for the SAT and is happy with her score after taking the test in December. “Even though it is optional, I think giving colleges more information is always better,” Granmayeh said. She also feels less pressure about her senior year grades because she has an extra data point to which colleges can refer.

In order to help seniors take their tests, the school offers the opportunity to take the ACT on October 6 and the SAT on October 14 during the school day. The school will ensure that adequate social distancing is possible by allocating a larger portion of the campus to testing, and all students and proctors will be required to wear masks.

Despite the addition of October test dates at ths school, some students are still worried. Morse was initially planning to test in August and therefore did not anticipate the need to take a test in October, but she is now more stressed after her August test was also canceled.

Morse has wanted to take the SAT since before spring break and studied almost an hour a day for the two months leading up to her test in March. At that point, she was unsure about the status of her upcoming test and was anxious about studying for a test that may be canceled. “I was extremely disappointed when my only SAT testing date was canceled because I had worked very hard,” she said. Morse was notified of the cancellation only the day before her test.

In addition, some students have changed their college lists according to their test scores. Morse said that College Kickstart, an online program that seniors use to determine which schools are reaches, targets, and likelies, asks for two data points: an SAT or ACT score and a student’s unweighted GPA. Morse is currently struggling to use the program without a test score.

Although Rebecca Rosenzweig (12) has a test score, she is unsure if she will submit it. Rosenzweig was able to take the SAT in December, but, wanting to score higher, signed up for tests in May and June, which were subsequently canceled.

The uncertainty about testing during the fall is particularly concerning to Rosenzweig. “I am not sure what to expect, which makes everything a little more stressful,” she said. “It helps that the seniors are all going through it together because we can rely on one another and it is always easier to go through difficult experiences with others at your side.”

Although Mikayla Benson (12) was also worried about the numerous cancellations, she said it has given her the opportunity to highlight her other skill sets, especially since she is a performer. “As a performer and writer, this has been exciting for me to consider,” she said. Benson has enjoyed writing supplements and the common application personal statement, as they have given her the opportunity to introduce herself in a way that better represents who she is as a student and person, she said