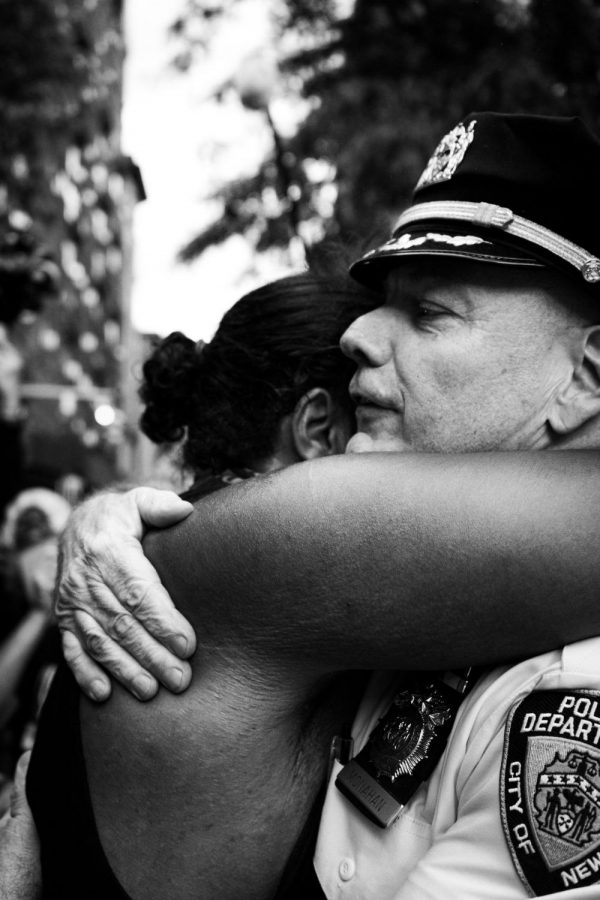 Crowds fill up Times Square, the Brooklyn Bridge, and the streets of New York. Posters in hand demand justice. Police officers watch as protesters link arms in solidarity. This fall, photographs by Julian Silverman (11), Ailill Walsh (11), Armaan Kakodkar (12), and Campus Photographer Barry Mason are on display in the Fisher Gallery, sharing the stories of the Black Lives Matter (BLM) protests.

Silverman attended and photographed several BLM protests with Kakodkar from the end of May through June. “We were there for several of the tense protests in the early days, but we were also there for the more peaceful protests later on, which were two completely different experiences,” he said.

All of Walsh’s photos are from one protest he attended with his club basketball team. “I’m the only white person on my basketball team, and everyone else is African-American, so I wanted to be there for them and do my part,” he said. “I was going back and forth between shooting photos and chanting with the other protesters.”

After Head of School Dr. Tom Kelly sent an email about the school’s plans to incorporate changes in the school’s diversity, equity, and inclusion work, Silverman reached out to Kelly and offered to share his photographs with those who were unable to attend the protests, Silverman said. Head of Upper Division Dr. Jessica Levenstein, Film/Video and Photography teacher Jordan Rathus, and Visual Arts Department Chair Dr. Anna Hetherington loved the idea. At the beginning of August, Hetherington asked if they would put on a show together, he said.

Hetherington said the gallery has two primary goals: to show as much student work as possible and to be relevant and significant to the community at large. “I hope that visitors to this exhibit will connect, will question, and will consider that the people in the photographs are real people,” she said.

When photographing the protests together, Silverman and Kakodkar would follow the protests as they criss-crossed the city, Kakodkar said. They followed protests through the FDR Drive, downtown Manhattan, across the Brooklyn Bridge, and off of the West Side Highway.

The protest that Walsh photographed began at Dyckman Street in Inwood and went all the way down to Harlem on 125th Street, crossing through much of upper Manhattan, he said.

Similarly, Walsh aimed to spread knowledge through his photographs. “I wasn’t trying to benefit artistically off the movement, but rather spread awareness to my friends who were isolated or in quarantine and unable to truly see what was happening,” he said.

Silverman doesn’t prepare an agenda before taking pictures but rather takes pictures whenever he sees fit, he said. He aims for viewers to interpret their own story through his pictures.

Kakodkar has a slightly different approach to taking pictures. He took as many photos as possible and even brought extra SD cards to ensure that his camera would not run out of memory. “After taking all the photos, I would go home, hope for the best, and then go through and edit all of them,” he said.

While photographing a protest, Walsh takes photos when someone is holding an interesting sign or wearing a piece of symbolic clothing, when a group of people are doing a motion together, or when there’s an interesting background, he said.

Walsh said there is one big difference between other photos he takes on the streets of New York City and the photos he takes of protests: the history that comes with the photo. Since its founding, the United States has dealt with the legacy of racism, and it’s still a problem today, he said.

“With photographing these protests I’m contributing to history,” he said. “My photos could end up in a U.S. history textbook 50 years from now.”

“All of the photos represent a positive note of the attention that people are providing to the BLM movement,” Kakodkar said. The photos have a powerful message behind them: people want change and are willing to go out and fight for it, he said.

Silverman said the images contain an array of messages: some display unity, while others reveal calmness, anger, exhaustion, and hope, among many other themes. “Unity is the most apparent, as many photographs show people chanting together, but you can also sense fear and anger in the photos as protesters react to police officers arriving at peaceful protests in full riot gear.”

Alex Nagin (11), who visited the exhibit with his Voices of Protest class, found the photographs beautiful, as the photographers truly “captured the essence of the protests,” he said. One photo he found particularly moving was of a Black woman hugging a police officer, because he’s used to seeing division between the police and the protesters. “I think it’s really important that we have this exhibit at school because we’re in what I believe to be the second rendition of the civil rights movement,” he said. “It’s good that the school is committed to exploring and discussing this movement both in and out of the classroom.”

Silverman hopes students and teachers will visit the exhibit and continue the conversation on social injustice or begin a new one. “We’re in the middle of something that happens once in a generation, and I think that everyone should be taking notice,” he said.

Just by going to the gallery or by reading more on BLM and why people are protesting in an effort to educate themselves, people can make a difference, Kakodkar said.