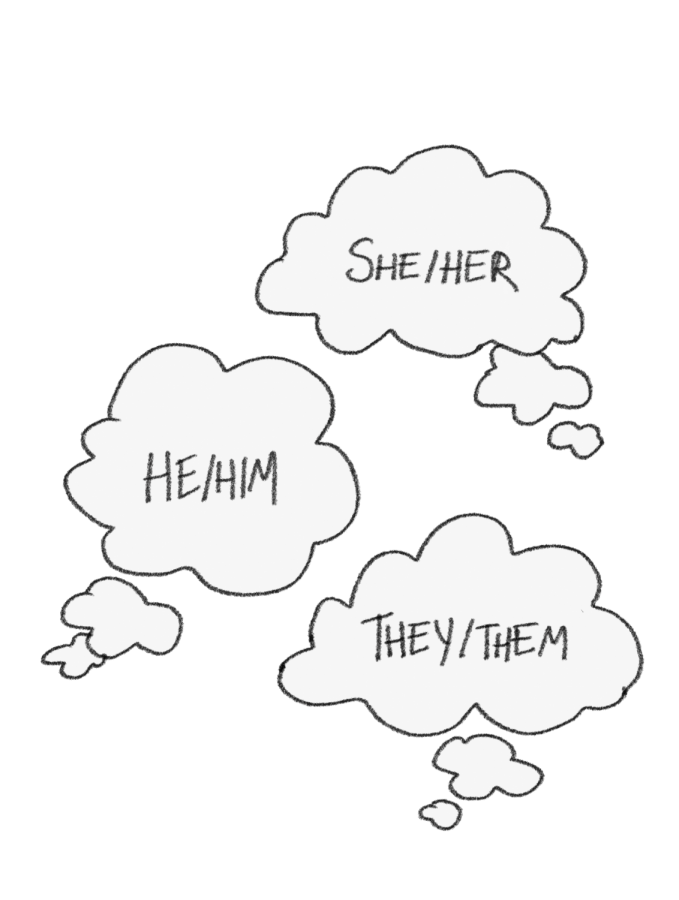 If you’ve scrolled through Instagram recently, you may have noticed a set of pronouns — (she/her), (he/him), (they/them), to name a few — typed out next to the emojis that already surround your peers’ usernames. Although some users had already added pronouns to their pages, a  wave of brightly colored infographics caused many to make this change in August. These shared posts emphasized the importance of normalizing gender identity and the pronouns that come with it. The graphic posted most by our followers was from the account @wearegenchange. It was convincing and accessible, containing two slides detailing the importance of pronoun usage for both cisgender (cis) and non-cisgender people. It specified that cis people “have nothing to fear from [pronoun usage]” and doing so “normalizes it for people who are not cis.” At the same time, the post made clear that non-cis people had no obligation to share their pronouns, unless they felt comfortable. As cisgender women, we understood that sharing our pronouns on social media was the easiest way to acknowledge and support the transgender and gender-nonconforming communities. By displaying our pronouns in a public place, we were normalizing that action for those who are not cis. We were attempting to create a more inclusive, open space.

Horace Mann prides itself on encompassing just that — its values surround inclusivity, progressiveness, and a radically open-minded community. So it would be an understatement to say that we were both disappointed last Wednesday when our teachers neglected to ask the students in our classes to share their pronouns. The day had been bizarre in many ways, so we presumed that the faculty had simply forgotten this part of our initial conversations. However, when we came into our classrooms on the second day of school, we were once again confronted by the lack of awareness during our introductions. Where was the inclusive community we had been hearing so much about? Most importantly, where was the consideration of Mutual Respect? If we had not taken the time to tell each other what we needed, how could we achieve a Secure and Healthful Environment and a Caring Community?

Within the school’s Core Values is a promise to create an accepting institution for all of its students. In order to see this goal through, we must truly be aware of all members of our community, no matter how they identify. To not ask students for their pronouns is to neglect the respect that is mandated by our Family Handbook; it is disrespectful to assume the gender of someone you have never met. These assumptions perpetuate harmful stereotypes and behaviors that oppose the values of our school’s framework.

We spoke to our friends and asked them if their teachers had acted any differently than ours. Only a few of the many students we spoke to had a teacher that asked for their pronouns; within those few, only one or two of their six or seven teachers bothered. When did Instagram, a platform designed to share pictures of brunch and mirror selfies, become more filled by progressive reform than the halls of Tillinghast?

We wondered if our anger was unnecessary, performative. We wondered if it was our place to address this topic, one that seemingly didn’t affect us. Looking for other perspectives, we spoke to our mutual friend who attends Fieldston, and she mentioned that the speakers at all of their assemblies introduce themselves with their name and pronouns, no matter how well-known they are or how long they have been a part of the community. We thought about our First Day Assembly, and we could not remember a single time an educator or student had begun their speech the same way.

We realized that as the majority, especially at this school, cis people play a crucial role in the normalization of pronoun usage. Cis people are entitled to a sense of security in their own gender identities, because they are in an environment that automatically perceives them as they wish to be perceived. Cis people: it is not about what pronouns do for you; rather, it is what saying them does for others.

This shift is as small as an additional sentence said by a teacher at the start of class, a simple form sent out before the first day of school, or a line added to the end of an email or next to a name on a Zoom call. In writing this, we are asking both students and faculty to consider implementing what many of us have already learned online. Pronoun usage can and should be normalized at Horace Mann — and cis students and faculty must play a large role in facilitating this change.