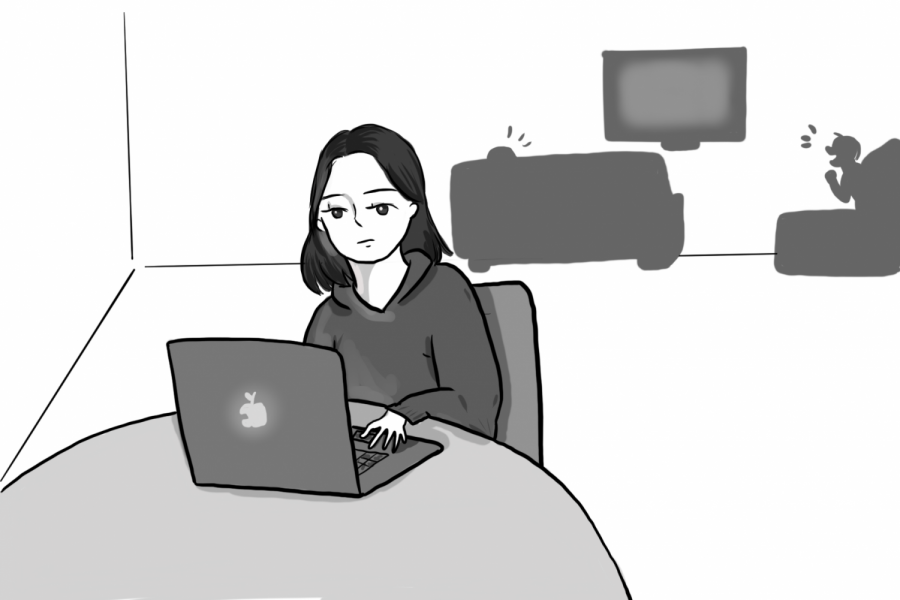 While many students have returned to the school’s campus, approximately 27 students, or four percent of the Upper Division, remains online. Despite the efforts made to adapt classrooms for these online learners, they still face difficulties hearing, seeing, and participating in the class, online learner Scarlett Goldberg (11) said.

In order to facilitate online learning for students, the Information Technology Department has added Huddle cameras and microphones to every classroom, giving students a better view of the white boards and allowing for students to hear their peers and teachers. Huddle cameras have a microphone included and swivel to give a complete view of the white board, said Head of Upper Division Jessica Levenstein.

Isabel Mavrides-Calderon (10), who has chosen to learn from home because of a respiratory issue, has found that she is still unable to hear the comments of other students made in discussion-based classes.

Mavrides-Calderon also said the inability to hear her classmates is creating difficulties in Chemistry. “When other students are explaining a problem or giving an answer, if I didn’t catch it, then I have a gap in knowledge,” she said.

Goldberg struggles to see the white board, she said. Additionally, she doesn’t know all of the students in her class, which makes it especially difficult to understand those talking during discussions. “When you’re having a debate or a conversation with someone, you need to be able to see each other, and since I can’t see the class, it’s bizarre,” she said.

Because the camera quality in some classrooms is blurry, Morgan Frances Cohen (11) has also experienced trouble seeing the white board. However, many of his teachers screen share presentations on Zoom, making it easier to follow along, he said.

Participating in class has also proved to be challenging for other reasons as well. “When you’re behind a teacher, it’s kind of hard to get their attention because you’re not always in the vision of the teacher,” Mavrides-Calderon said. “You either have to call out, or be lucky if your teacher sees you, and it’s kind of uncomfortable calling out in class.”

Math teacher Benjamin Kafoglis has discovered that including virtual students is difficult when he is unaware if their hand is raised, he said. “Certainly, if a student is raising their hand, I’m going to notice that, but if it’s a screen I might not think to look at it,” he said. “My main focus is how I can make this experience as equitable as possible.”

Lexi Lawsky (8) also said participating in her discussion-based classes has been a challenge, she said. “In some classes, like math, participating means just filling out a worksheet on Notability and handing it in through email, but in other classes, like English, it’s a little harder,” she said. “I don’t really get to participate as much, so I sometimes feel left out.”

The challenge for virtual learners to participate has caused Leonardo Giorgini (11), who remains home because members of his family have respiratory or immune issues, to work especially hard to be an active member of the class, he said. “It’s very much on me to make sure that I’m doing everything I can to be able to participate in class to really speak out if I have something to say or a question to ask,” he said.

Giorgini’s teachers reached out to him and explained that they would make a conscious effort to include him in the class, he said. Since classes began, they have worked to incorporate Giorgini in the discussions, and he hopes that everyone is able to learn and voice what they have to say while being heard by the rest of the class.

In an effort to include Giorgini in the class, math teacher Timothy Behan pairs Giorgini with a member of the class by placing the computer on the desk of a student. “He always pairs me with a different person, and enables me to be able to participate by doing the same problems or worksheets that the other kids are, so I’m able to contribute and I’m able to get the most out of the class,” Giorgini said.

Similarly, Lawsky’s English teacher James Brink has paired her with a member of the class as a “seat partner” as a way to ensure that Lawsky is included in the discussions and also is able to ask questions during the class, she said.

While the school has implemented changes in an effort to accommodate students academically, remote students are still unable to engage with their peers socially, Goldberg said. “That’s the downside of remote learning,” she said. “It’s really hard to see your friends and socialize and especially meet new kids in our grade or in the grades below.”

Frances Cohen also finds connecting with in-person peers difficult; however, he has been able to connect to other online students. “I’ve gotten closer to people who are also doing online school, because when you’re on Zoom, you can interact with those people but only those people,” he said.

Mavrides-Calderon has felt like she is missing out on spending time with her peers and friends. “My friends have been really great about facetiming me during frees and lunch, but there’s definitely an aspect of FOMO [fear of missing out],” Mavrides-Calderon said.

Mavrides-Calderon hopes that when school activities begin, online students will have more opportunities to become involved in student life.

In an effort to improve the experience of online learners, Upper Division Dean of Students Dr. Matthew Wallenfang organized a meeting for teachers to share ideas of what has been successful or unsuccessful in teaching remote learners, Visual Arts Department Chair Anna Hetherington said. The meeting was optional and took place Wednesday afternoon, Kafoglis said.

“With lots of teachers figuring this out, we want to learn from each other,” Kafoglis said. “There’s still a lot of brainstorming and collective problem solving happening.”

“It’s exciting to be with students in person, and so the extra challenge is making sure the remote learners feel like members of the in-class community as much as possible,” Hetherington said.