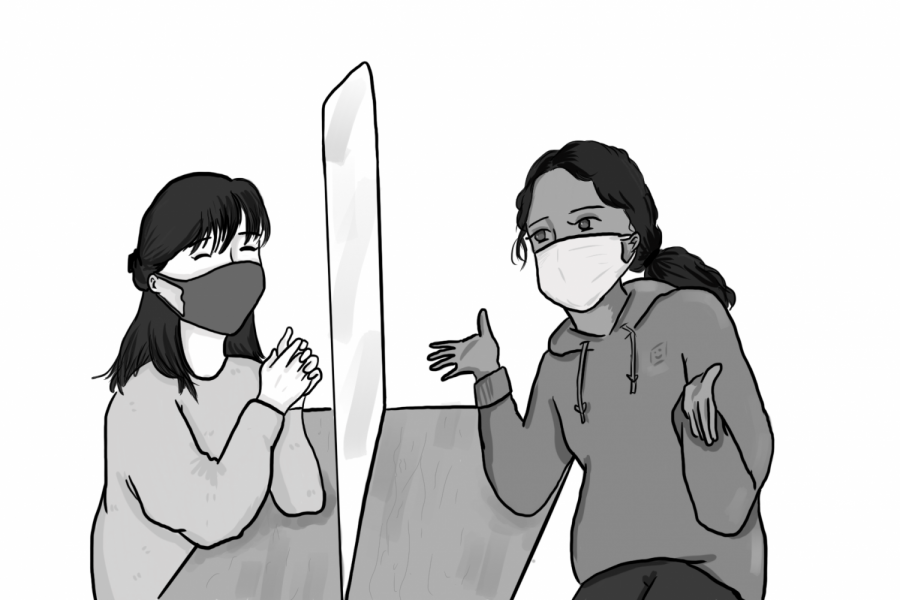 Large circular tables have been converted into rows of desks with plexiglass barriers, and students no longer gather in groups in the library — and as result, students and faculty are finding new ways to communicate and collaborate both inside and outside of the classroom.

Hannah Lipskar (12) now has fewer group discussions during her humanities classes, which she believes is caused by the new seating arrangements, she said. Instead, her classes have become more lecture-based, or her teachers call on students to speak one at a time.

History teacher Dr. Ellen Bales said the Harkness tables promoted class discussions, because students could see each other and her as she moved around the room. The rows in the classroom call for a much more traditional setting, to which Bales has had to adapt, she said. Rather than moving freely around the classroom, Bales must now stand at the front of the room, six feet away from her students.

“It is very difficult to have organic discussions,” English teacher Dr. Wendy Steiner said. “Of course, I support all the measures being taken, and they are very necessary, but having students in rows and having plexiglass barriers make it very hard to have a kind of regular class.”

To overcome the difficulty of the barriers, Jaden Richard’s (12) teachers attempted to utilize Zoom for partner work within the classroom, he said. However, because everyone was speaking and listening to their computers at the same time, the noise made it difficult to hear one another. Now, the class has gone back to the more traditional in-person communication.

Head of Science Department Dr. Lisa Rosenblum struggled to have her classes to work in groups successfully, she said. It took students a while to interact with one another because it was harder to hear and see everyone’s faces, she said.

“It’s taken a bit of thinking as to how to work in groups safely, but students in my classes have gotten the hang of having pair share discussions on either side of the desk partitions,” Rosenblum said. “We have tried to avoid raising the volume [of our voices], because then there could be aerosols that the mask might now prevent.”

Rosenblum has also been attempting to minimize the amount of time her students spend speaking to each other one-on-one, a difficulty she had not faced before this year.

The barriers between each desk have also posed problems for the collaborative nature of math classrooms, Annie Wallach (12) said. “On the first day of school, we had an activity where we had to ask each other questions from a sheet and share with the class, but when we started talking, we realized that no one could hear each other.” With masks on, it is also impossible to read lips, she said.

The inability to hear the student next to you has been especially harmful in foreign language classes, Alex Nagin (11) said. “Speaking to a partner is one of the most elemental parts of learning a new language,” he said. “But I just cannot hear the people next to me.”

Despite these challenges, teachers are still finding ways to experiment with their teaching techniques. “I do a lot of small group work, so I am trying to find ways — whether it is by using the technology in the class or just having people who are already in the rows talk to each other — to be able to do that,” Steiner said.

Chloe Dichter’s (9) French teacher has been projecting documents both on the SmartBoard and has been sending them to students’ personal computers. This setup allows for students to both hear what the teacher is saying and reference it in two places in the room, Dichter said.

Bales has used shared Google Documents to create a collaborative working environment that does not necessitate speaking, she said. This method gives the students who tend to speak up less in class an opportunity to participate in the discussion without having to speak in class.

Teachers have also become harder to hear, Wallach said. “There are definitely some instances where a teacher says something, forgetting that they have to talk louder,” Wallach said. She has had to ask teachers to repeat themselves, but she thinks that teachers will remember to enunciate and start to speak loudly as the year continues.

When doing partner work, Lipskar moves her chair back to have a discussion so that she can easily listen to others without the barriers drowning out the conversation, she said. Although moving back ultimately allowed for Lipskar and her partner to complete the assignment, she realizes that moving behind the desks defeats the purpose of the barriers. “I think right now, the line is really blurry between what is safe and what is not,” she said. “The project that we were doing worked out fine, but I did not know whether or not we should feel comfortable with the way we had to do it.”

The plastic screens in front of desks also block students’ vision of the board, Wallach said.

As a result, most teachers have allowed students to take them down for the sake of convenience, Lipskar said.

Because of the barriers and the plexiglass between desks, it is harder for students to see the board unless they are in the front row, Audrey Carbonell (10) said.

On the first day of school, Wallach was not in the front of any of her classrooms, and she was unable to see, she said. Since then, Wallach has made an effort to arrive to class early in an attempt to get a seat in the front.

Because of the mask policy and seating arrangement in the classrooms, Steiner has found it more difficult to know how her students are feeling in class, she said. “I have been [asking kids to do] thumbs up, or I will just ask them how they are to get a read of the temperature of the room,” she said.

Rosenblum has found that getting to know her students has become a slower process than in past years. Still, she feels like she is starting to connect with them now. “It’s been great to be with my students in person and to be able to respond to their energy in class,” she said.

To minimize contact in hallways, the school has implemented staggered dismissal times — teachers are now required to end class five minutes early on their non-testing days. Because of this, there are students that Wallach has not seen in the past few days. Wallach had assumed that they were attending school online, but in reality, she had just not seen them, she said.

Last year, after H Period, Alex Nagin (11) would congregate with his friends before going home, he said. “Now I just exit the classroom and walk to my bus alone.”