Remembering RBG: “May her memory be a revolution” 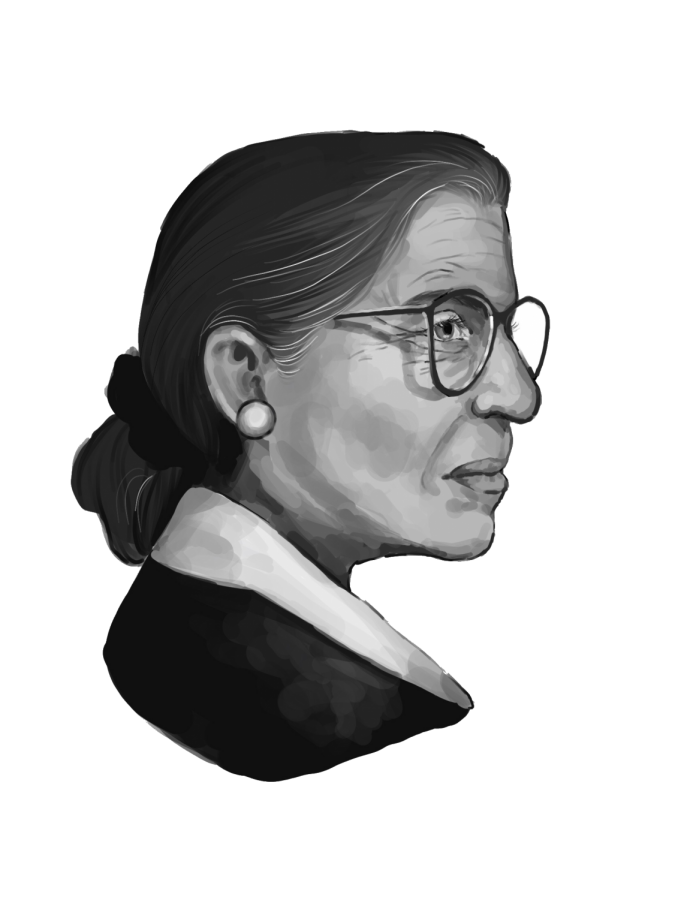 When I found out RBG passed away, I felt sad, and then scared, and then worried that I was one of those white women who venerate RBG as the highest beacon of progressivism, assuming that she fought equally for all marginalized people. I received the news at the table during Rosh Hashanah, when a Jewish friend texted me from his own dinner. Seven more of my Jewish friends texted me within five minutes. I had never previously felt particularly connected to RBG as a Jewish icon, and I had never felt so connected to my Judaism during a Rosh Hashanah. The significance — both religious and political — of her dying at this moment cannot be understated. Someone who dies on a Shabbat or a Rosh Hashanah is a person of great righteousness, a tzadik. She died on both, which feels apt for the reach of her particular righteousness.

The last big news around a Supreme Court justice was Brett Kavanaugh’s confirmation. That year, I was one of four girls in my U.S. History class, and I felt like the boys assumed I was less capable. I would plan out my comments in my head and exert wild amounts of energy ensuring I never said “like” or let my voice crack. When I watched Dr. Ford on TV, I saw my best case scenario. This professionally successful, wealthy white woman, the most “respectable” by every societal standard. But the moment she threatened a powerful man’s reputation, she received so many death threats and rape threats that she had to relocate her family.

I know that I am not a passive person and that I will at some point annoy or threaten power. What I internalized from the Kavanaugh confirmation at age 15 was that no matter what I do — no matter how accomplished I am, or how traditional my personal life is, or how generationally American or Christian I could pretend to be — I will never be immune from verbal or physical misogynistic violence.

Ruth Bader Ginsburg was a 5’1 Jewish girl from Brooklyn. She was my grandmother’s celebrity look-alike. She had a nasally voice and a New York Jewish accent. And she still commanded respect across party lines and generations. She had a reverse-Ford impact on me; she gave me hope, and I never identified it until after her death. She was a Supreme Court justice who dissented in the name of voting rights, reproductive rights, civil rights, and environmental justice, and who failed at times to protect Native Americans and immigrants. She graduated first in her class at Columbia Law School as one of the only women in the school and did so without abandoning the pitch of her voice or her pronunciation of the word “talk.” My relationship to RBG, as someone who cares about justice and who hopes to one day go into a career in law or public policy, is necessarily linked to my relationship to her as a nasally-voiced Jewish girl from New York. She proved that I can be both, and I don’t need to mimic my male peers’ speech patterns to get there.

To those reading this — brilliant, involved, deserving Horace Mann students — you may feel like your identities and professional aspirations contradict one another. I wish I could personally find you a Ruth of your own, a reflection of you who has overcome all odds and become a widely respected and adored public figure. Representation has progressed and will continue to do so as we fight for equality, but in the meantime: please please share that thought you are holding back in class. Know that you are smart and valuable, and then act like it. Know that your perspective has the power to change people and institutions, to help uphold (or, really, create) democracy. And then vote, and get everyone you know to vote, and don’t stop there.