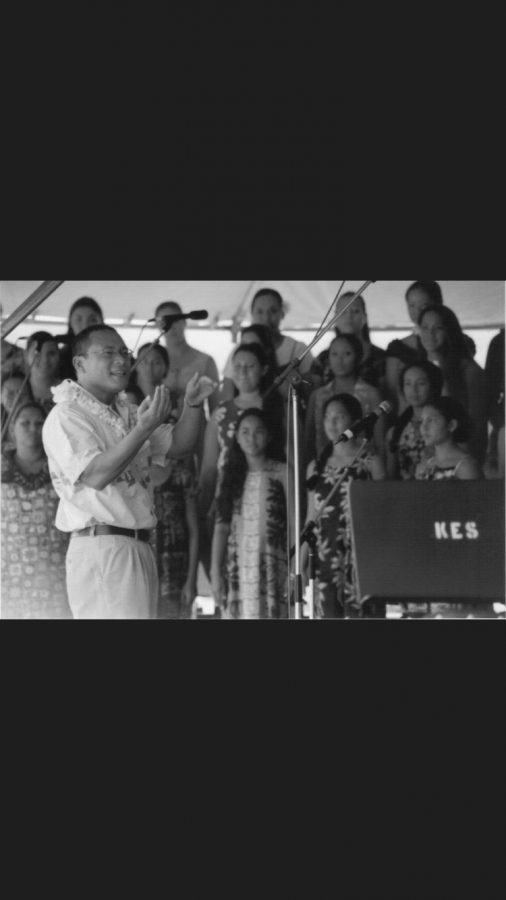 “It’s impossible for me to separate myself from my Hawaiianess,”  Music Department Chair Timothy Ho said. “The way I relate to music and the way that I have learned to teach music is from a significantly Hawaiian perspective.”

Ho was first exposed to music through the Diablo Valley Hui o Aloha, a Hawaiian civic organization to which his parents belonged in Napa, California. Ho and his family would attend events hosted by the organization every Friday night. Adults and older children would sit in a circle and sing traditional Hawaiian music with guitars and ukuleles, he said.

Ho is the youngest of five children in his family. By the time he was in fourth grade, Ho would practice piano, flute, or ukelele to help fill the quiet in his parent’s house after three of his older siblings had left home, he said.

In ninth grade, Ho left California to attend Kamehameha Schools, a private boarding and day school in Honolulu, Hawaii. There, he was selected by his peers to lead his grade in Hawaiian choral music in the Kamehameha School Song Contest, a televised singing competition. Ho conducted his grade’s choir in this contest for the following four years, making him the only student in the school’s 100-year history to do so. For this accomplishment, he received the Louise A’oe McGregor Award.

It was only after he began directing choir that Ho felt his Hawaiian sensibility fuse with his Western sensibility, he said. “That’s where that kind of stopped being so separate,” he said.

Throughout Ho’s choral career, Dr. Randie Fong has been one of his most influential musical inspirations. Fong was the performing arts department chair, choir director, and traditional hula instructor at Ho’s high school. He mentored Ho in everything from teaching strategies to Hawaiian cultural practices to Hawaiian choral arranging, Ho said.

Ho was initially interested in ornithology, the study of birds, and was admitted to Columbia University to study biology. However, he was encouraged by his “kumu,” or teacher, Fong, to consider going into music education so that he might eventually return to Kamehameha to teach their choirs, he said.

Ho was also accepted into Pacific Lutheran University’s top choir, and he attended with the intent of becoming a band director. The choir was directed by Richard Sparks, one of the most recognized choir directors in the United States. “It was sort of an opportunity I couldn’t pass up,” Ho said. “Randie Fong is one of the most highly regarded Hawaiian musicians. Period.”

The first piece he performed in college was called “Les noces,” a Stravinsky piece with four pianos, a choir, strings, soloists, and percussion orchestra. “I think it was significant because it really showed what I was capable of doing,” Ho said.

Ho felt fortunate to be able to spend time learning music and lessons from Fong, including to be a leader, how to talk to others, and how to always prioritize kindness, he said.

Under Fong’s guidance, Ho took up a job teaching choir at a high school in Lakewood, Washington before going on to direct the Concert Glee Club at his alma mater, Kamehameha School.

After teaching there for over eight years, his choir was selected to perform at the American Choral Directors Association National Convention in 2005. Due to the intense entry requirements, most accepted choirs have directors aged between 40 and 60 years old. Ho’s choir, on the other hand, was selected when he turned 30, which was a huge accomplishment, he said.

Before marrying his partner Michael Jaros, the couple decided to move back to California to take care of Ho’s parents. Soon after, they married. Jaros moved to New York City to attend a master’s program at Columbia and accepted a position at Horace Mann. In April of that school year, Ho applied to be the school’s Choir Director.

Before Ho came to the school, the choir program had shrunk dramatically, as it lacked a long-standing choir director. Ho not only rebuilt the choir but also added a Middle School music program, he said.

“I’m immensely proud of the Horace Mann’s choir program in terms of the students who have committed to it and the beauty of the singing,” Ho said. “Every Horace Mann student I have taught Hawaiian music to has grasped it with open arms and with love and amazing respect, and that, to me, is the most amazing thing I could ask for in my career.”