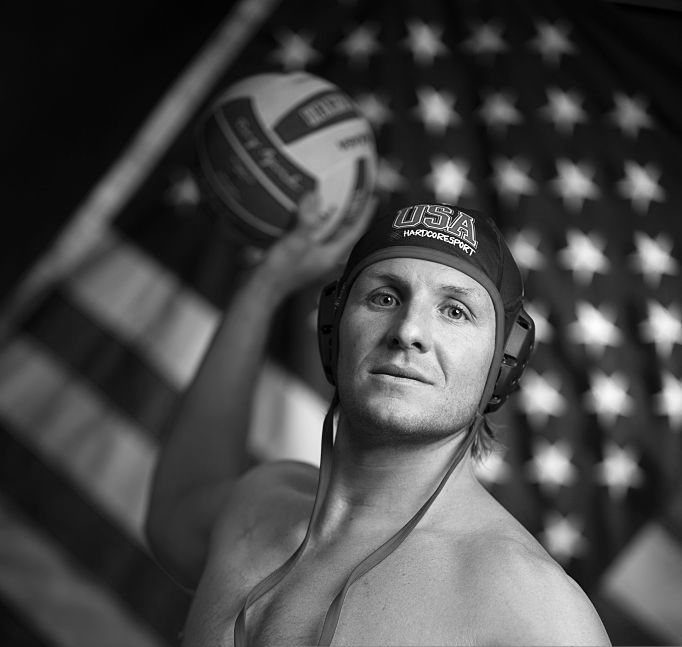 Given that the team is still unable to enter the pool, Duffy thought this would be the perfect opportunity for the team to learn from Azevedo in an out-of-water clinic. “When Azevedo came in the summer of 2019 for his clinic, he was so good with the players that it was such a natural fit,” Duffy said. “Even though we can’t practice in the water just yet, I knew even just learning from his drills and work ethic would exponentially benefit our team.”

While on Zoom with the team, Azevedo was broadcast on the Loria Family Scoreboard. Although the team did not enter the pool during the clinic, Azevedo demonstrated many of his fitness and wellness techniques while the team followed along on the pool deck. The exercises, which included sets of burpees, full-body sit-ups, and shoulder and back exercises, allowed for the isolated activation of muscles which, with persistence and repetition, will elevate the strength and flexibility of the players in the pool.

Ari Salsberg (12) said he would continue doing the exercises in the future. “Clearly, his practice has paid off, so of course to be the best we can his advice is incredibly valuable,” he said.

During the clinic, Azevedo stressed the importance of making connections between the exercises he assigned and the game itself. Even though the drills were done on land, he explained what group of muscles each exercise targeted and how it would help the players become stronger and more mobile. Through this, the team would be able to understand each exercise and the benefits it would provide for them when they return to the water.

“I know how great of a player he was and it was great to be able to learn how he trained to become the best,” Spencer Rosenberg (11) said. “It was also really nice to be able to personally ask him questions. It is not everyday that you have that type of access to information.”

Duffy found the clinic inspirational. He said Azevedo’s connection with the team exceeded his expectations. “He told a team a very personal story from his childhood: he went into a coma at the age of four,” Duffy said. “He used this as an example of just one of the many challenges he had to overcome and explained how he set an ascending list of achievable goals with an Olympic gold medal at the top.”

Rosenberg said he was also inspired by Azevedo’s stories about his personal life and struggles. “I had no idea what he had to go through,” he said.

“As he was speaking to us it really struck me that he was one of the best to ever play water polo,” Walker McCarthy (11) said. “A world champion athlete took time to hold a personal clinic for us over Zoom. That’s definitely not something I will get to experience again.”

Duffy hopes the team can learn from the work ethic that allowed Azevedo to become a great water polo player, he said. “He is an inspiration to so many kids and his main message has been to work harder every day to become the best player that you can possibly be,” he said. “Even outside of water polo, Azevedo has stressed the importance of trying your hardest at whatever you may love to do.”