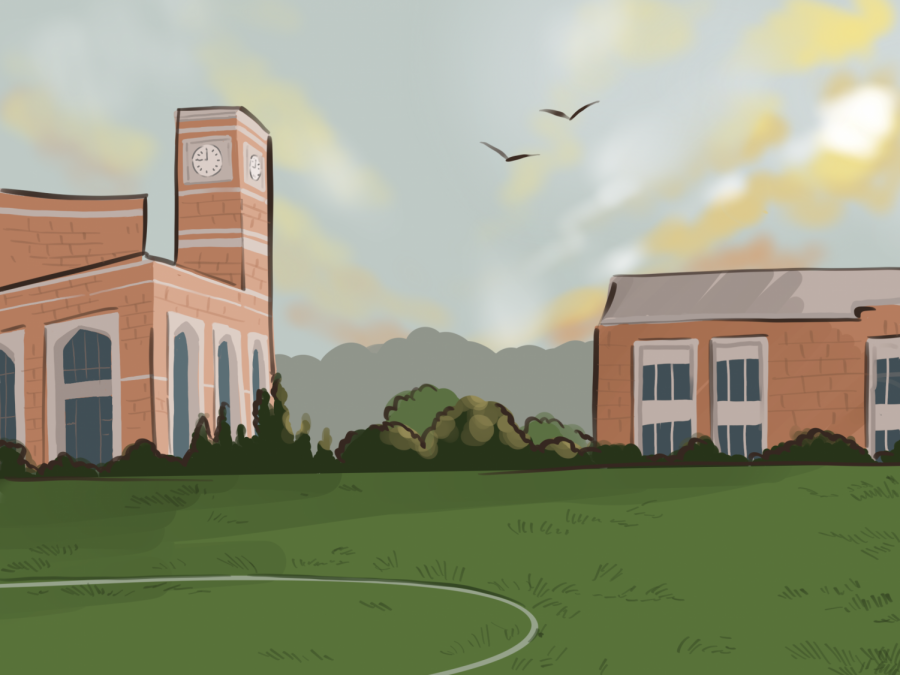 The Upper Division (UD) and Middle Division (MD) will run virtually until October 19 due to four COVID-19 cases in the community, Head of School Dr. Tom Kelly wrote to parents and guardians in an email on Monday night. The news followed an unexpected three day weekend after the first COVID-19 case in the Physical Education (PE) Department on Friday. School was canceled on Monday to conduct contract tracing, and Kelly announced the move to online later that night.

Three of the four positive cases were Middle and Upper Division PE teachers or coaches, Kelly wrote. The fourth was a member of the College Counseling Department. The next two weeks will be used as a quarantine period for the members of the community identified as close contacts through the school’s contact tracing, he wrote. “These additional cases of positive COVID-19 do have overlap with students and employees at a level that makes me uncomfortable moving forward with in-person instruction.”

The first positive test of the school year was identified in the community last Saturday. After testing at an outside facility, a member of the MD and UD PE department notified the school that they had tested positive, School Nurse DeAnna Cooper said. However, all of the 244 members of the community tested at the school on Friday tested negative, she said. This COVID-19-positive coach was likely asymptomatic all week, Kelly said at the town hall for parents on Sunday night.

A close contact is defined as anyone who was within six feet of the infectious person for longer than 10 minutes, regardless of masks, or an individual who was in an enclosed space with the infectious person for longer than an hour, Cooper said. The identified close contacts will be notified by the school to quarantine for 14 days and to monitor for symptoms of COVID-19.

So far, only one student, Ari Salsberg (12), has been identified as a close contact of the initial positive case. Salsberg met with the coach in their office on Thursday for about 20 minutes to discuss what the team’s practice would look like with social distancing guidelines. The meeting was masked and Salsberg sat distanced from the coach, he said. “I really didn’t think anything of it because there was no indication that the individual had COVID because they showed no symptoms, so it felt safe because of the masks.”

When he received the school’s email stating that a coach had tested positive after attending a wedding, Salsberg began to quarantine within his own home out of precaution. “I had a pretty good indication of who the individual was because the coach I had met with told me about a wedding, so I immediately self isolated from my family.”

Salsberg’s hunch was confirmed on Sunday morning, when the school notified him that he had been identified as a close contact, he said. That morning, Salsberg took a COVID-19 test, which came back negative. Salsberg still plans to quarantine for the full 14 day period and will be tested again before returning to school.

Over the course of the weekend, the school was notified that three other faculty

members had tested positive at outside testing facilities, Kelly wrote.

All of the positive coaches’ sports teams received an email stating that one of their coaches had tested positive over the weekend. However, students on the team were not identified as close contacts.

All members of the Girls Varsity Cross Country team received a similar email, identifying them as people who had come in contact with a COVID-19-positive coach. However, the girls on the team were not identified as close contacts because their indoor practice on Friday ran for less than an hour.

Momo Campbell (12), a student assigned to the COVID-19-positive college counselor, was not identified as a close contact, despite having a meeting last Tuesday, he said. Campbell is in the process of receiving weekly treatments for pediatric cancer and he said that he cannot enter the hospital until he tests negative.

While the MD and UD will be online for the next two weeks, the Lower Division (LD) and Nursery Division (ND) will remain in person, Kelly said. Jane Greyf P’22 P’32 said that she is willing to send her first grader to school because of the importance of in-person instruction. “None of this is ever perfect, but to me this is just another one of those smartly calculated risks by Dr. Kelly, which keeps at least some portion of the kids in school.”

Greyf is also glad that LD students can still have in-person instruction so that parents do not have to worry about helping their child do school online, she said. As a result, Greyf can continue to work at her office rather than working from home.

On Wednesday, the ND reported their first COVID-19 case involving a PreKindergarten faculty member, Kelly wrote in an email. However, the ND uses a pod system where students only interact with the other members of their pod, so contact tracing was very straightforward, Kelly wrote. As a result, all of the close contacts of the COVID-positive teacher, including all of the students and employees who interacted with their pod, have been directed to quarantine for fourteen days and submit a negative COVID-19 PCR test results before they return to school, he wrote. The ND will remain open to in-person instruction, he wrote.

Despite the outbreak of cases, Cooper thinks that it is likely that the UD and MD will return to school on October 19, she said. “If we are vigilant in watching for symptoms and take social distancing, mask wearing, and hand hygiene seriously, there is a good chance school will reopen without issue,” she said. “It is really up to the community.”