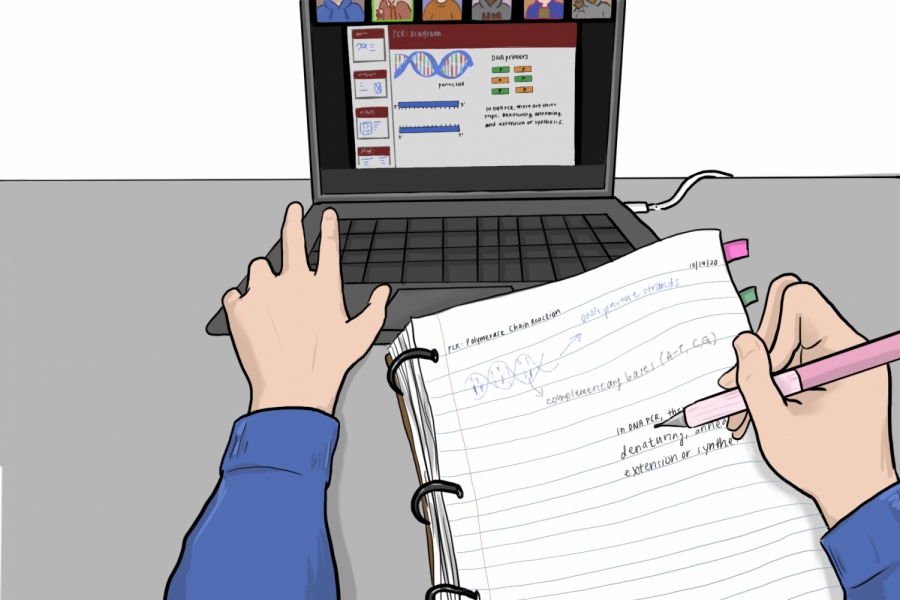 Both the Upper Division (UD) and Middle Division (MD) shifted to HM Online 2.0 for two weeks because of four COVID-19 cases in the community.

Since the transition to HM Online 2.0, the UD has been following a new schedule to prevent students from having too many classes in one day. Full-credit classes meet twice a week and half-credit classes will only meet once a week, Dean of Students Michael Dalo wrote in an email on October 5.

During HM Online in the spring, teachers determined when they were going to hold synchronous and asynchronous classes, which caused many students to have a full day of class on some days and few classes on other days, Dalo said. This difficult schedule sometimes caused “Zoom fatigue” on full days of classes, he said. “I just do not think that that’s healthy, and it is not something that we should be doing.”

The biggest problem with HM Online in the spring was the inconsistency of the schedule, so HM Online 2.0 has been better, Arman Azim (10) said.

Sophie Gordon (11) said the schedule of HM Online in the spring was confusing because teachers would sometimes change the days their class met. “Since teachers foresaw [that the school might go online] and thus prepared how they were going to teach, it feels much better.”

The schedule is much more organized than the schedule of HM Online in the spring, which makes it easier to follow, making the transition fairly straightforward, Juliette Shang (11) said.

“By having classes every other period, it increases engagement, or at least increases the opportunity for us to engage in meaningful ways,” Dean of the Class of 2023 Chidi Asoluka said.

The administration is encouraging teachers to be thoughtful about how they allocate their asynchronous class times, Dalo said. This may mean asking students to familiarize themselves with topics on their own so that more synchronous class time can be spent answering questions about homework or practicing, he said.

“I don’t like all of the asynchronous work, because it is much easier for me to get distracted and lose focus than if I were actually attending a class and also because it’s harder to ask my teachers questions,” Bart said.

Ria Chowdhry (11) likes that with the new schedule she is able to wake up later and complete all of her work during her frees, she said.

Gordon likes HM Online 2.0 because the extra free time allows her to sleep in, avoid her daily commute, and read more, she said.

Since Sean Lee (10) is a new student, he wanted school to be in-person for the first few weeks so that he could get used to his classes, so he is happy that he was already familiar with his teachers prior to starting HM Online 2.0, and found the transition to be fairly smooth, he said.

However, Brett Karpf (11) found the transition to HM Online 2.0 to be tough because the assessments he would’ve completed the first week of HM Online 2.0 were pushed back and became piled up, he said.

Bart said the transition was complicated by the abrupt switch and multiple days off which have both impacted the schedule, she said. “Especially with all of the changes to the schedule due to not having school both Mondays, I found that a lot of my teachers were trying to make up for the missed classes.”

Physics teacher George Epstein experienced some small challenges while adjusting to HM Online 2.0, such as technical hiccups with Zoom and adjusting to the schedule, but overall the transition was fairly smooth, he said. Since there are opportunities for additional optional periods and one-on-one meetings, there is still plenty of time to cover questions that may not have been answered in class, he said.

After the school went online in the spring, Epstein realized he prefers teaching on an actual whiteboard as opposed to a virtual one, so he purchased one which allows him to stand up and move around for classes, he said. “It makes it easier to interact with a full class, and I am enjoying it much more than using the virtual whiteboard.”

With the new schedule, Wednesdays are reserved for advisory or assembly, SOI, HMO, and meeting with teachers.
Gordon enjoys having only advisory on Wednesdays because it allows her to take a “mental health day” in the middle of the school week, which is especially important with all of the stress from the pandemic, she said.

Similarly, Juliette Shang (11) enjoys that there are no classes on Wednesdays because it gives her an opportunity to meet with her teachers and have a relaxing day, she said.

On the other hand, Azmi dislikes the schedule for Wednesdays. “It’s kind of an awkward day,” he said. “You finish your work early in the morning and like the rest of the day there’s nothing to do, so I’d rather have a couple classes.”

Lee wishes the schedule were more easily accessible, since at times, he finds it difficult to keep track of, since the only sources of information are Dalo’s emails, he said. “I have to go through all of the club emails and notifications from Google Classroom to finally find the schedule,” he said. “I didn’t know that we didn’t have classes on Wednesdays.”

All things considered, Dalo said that the first week of HM Online 2.0 was successful. “I think that there was some confusion about which classes were meeting each day, but I think for the most part the transition was pretty smooth.