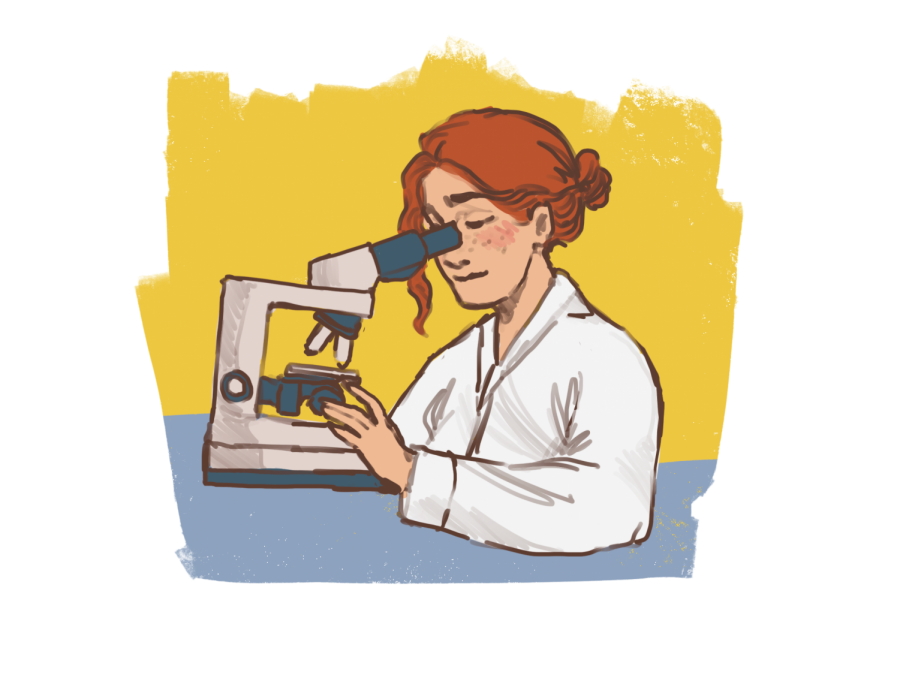 Last Saturday, over 160 people from around the world attended the STEMs conference — spearheaded by Danielle Paulson (12) and Alexis Fry (12) — to empower young women in STEM: science, technology, engineering, and mathematics. Attendees at the four-hour conference first heard from keynote speaker Jelena Kovačević, the Dean of New York University Tandon Engineering School, followed by the “Tech Leaders” panel and the “Next Gen Tech Leaders” panel. To finish the conference out, attendees heard from keynote speaker Leanne Caret, the President and CEO of Boeing Defense, Space, and Security.

The event was inspired by similar events held at The Dalton School and Hunter College High School last year, Paulson said. This conference plays an integral role in exposing young people to prominent women in STEM and confronting the gender gap in STEM, Fry said. “I wanted this conference to help young women see themselves in places of leadership in technology and leadership in general,” she said.

In preparation for the event, Paulson and Fry reached out to the keynote speakers and panelists via email, LinkedIn, and Instagram, Fry said. Dean of Students Michael Dalo helped plan the logistical details of the event by setting up the webinar, she said.

The conference started with Kovačević’s 45-minute presentation, “Our Hidden Figures,” during which she spoke about her upbringing and how she came to be a woman in STEM. Kovačević was born in the former Yugoslavia, where she did not experience gender-based discrimination, she said. Kovačević first encountered the implicit biases in STEM when she became a department head at Carnegie Mellon University. “One day, I looked at the number and was shocked to see that only 20% of the undergraduate students were women,” she said.

Kovačević stressed the importance of teaching young children that inclusion is a priority and that female leaders in STEM are natural. “I want women to know it is okay for them to be average at something STEM related without reinforcing a stereotype,” she said. “They do not always have to be the best in the room,” she said.

This message resonated with Louise Kim (10), who has also experienced pressures to succeed based on her race and gender, Kim said. “Her message helps me to accept the fact that I don’t have to be perfect at everything just because I’m Asian-American.”

The panelists discussed their own backgrounds, their careers in STEM, and offered advice to young women. Warren said women should always take a seat at the table and offer their opinion. However, once Warren was able to make her voice heard, she realized that she had to help other women do the same, she said. “Now that I had the seat at the table it was my job to bring another chair up for another woman in the room.”

Dalo said he had never thought about this additional responsibility of women. “I can just imagine that that has to be exhausting,” he said. “It’s clear that even after a woman has succeeded and secured her spot at the table, her work is never really done.”

At the “Next Gen Tech Leaders” panel, Fry and Paulson interviewed four female college students who have impacted the STEM community. Catherine Yeo, a junior at Harvard, spoke about making code more accessible to visually impaired individuals by coding with voices.

Audrey Pe, a freshman at Stanford University, spoke about founding WiTech, a nonprofit organization in the Philippines that educates and empowers the youth to close the gender gap in STEM. “My team and I are building towards a future where all youth, regardless of their socioeconomic status or gender, have access to tech and the ability to create amazing things,” Pe said.

In order to make technology equitable and accessible, closing the gender gap isn’t enough, Pe said. “It has to be a socioeconomically diverse 50-50,” she said. “If it’s just that top 1% [included in STEM], then the technology being developed will only be developed for that 1%. So we have to make a deliberate effort to go out and teach low-income students how to code and bring tech into their lives.”

The “Next Gen Leaders” panel was Kim’s favorite because the panelists were younger and more relatable, she said. “They provided a lens through which I could see our own generation in the industry of STEM, and I could see myself represented in them in just a few years.”
The last keynote speaker was Leanne Caret, the President and CEO of Boeing Defense, Space, and Security. According to STEMS NYC, Boeing is a $26 billion company that provides solutions for defense, government, space, intelligence, and security.

In her talk, Caret spoke about Boeing’s commitment to inspiring women to pursue STEM. She spoke about the early days of her career where she was often the only woman in the room and told not to sit at the table. “For the ladies on this call, my hope is that you won’t be the only woman at the table, but if you are, speak up and make your voice heard.”

Paulson hopes that the conference motivates young female students to pursue their passions, she said. “By instilling them with this motivation, hopefully in the future we’ll see greater gender equality in STEM fields,” she said.

STEMs conferences will likely become a tradition, Fry said. Future conferences will be spearheaded by Esha Gupta (10) and Bela Tinaj (9). “We want to make STEMs a tradition because we believe that increasing women’s representation in STEM fields is something that HM should continue to standby in years to come,” Gupta said.