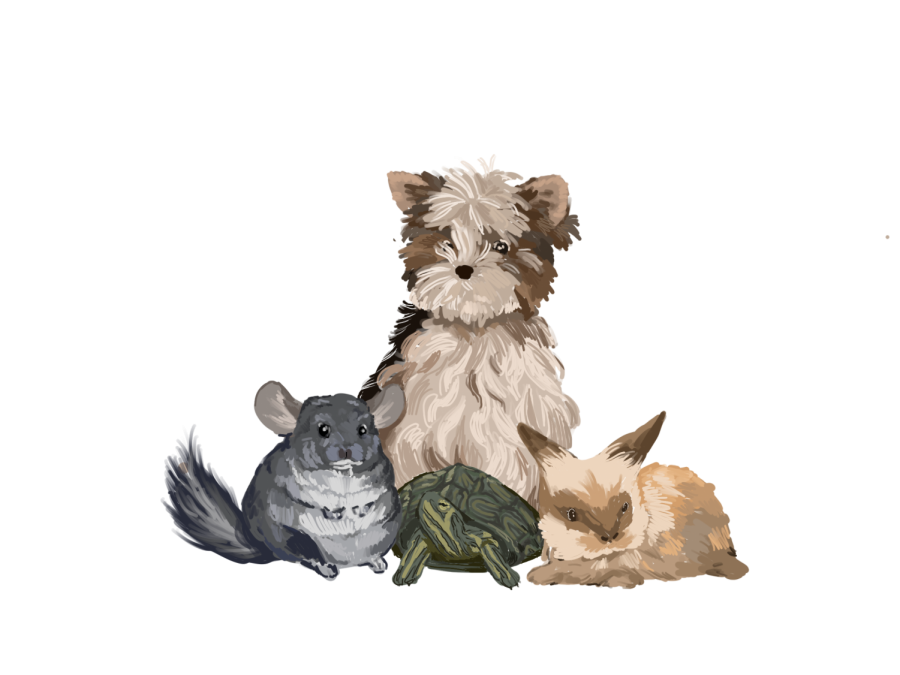 “A pet is like a friend that you get to see every day — except this friend, you don’t have to social distance around,” Ethan Waggoner (11) said. Due to COVID-19 and the resulting need for social isolation, animal adoption centers are emptying as adoption rates hit an all time high. Some New York City shelters are seeing application numbers at 10 times the normal rate, and the rates of fostering have increased by 90 percent in New York and Los Angeles, according to WIRED.

“When you can’t leave your apartment to socialize, and touch has become taboo, many have found themselves yearning for animal companionship,” USA Today wrote. Having an animal companion around the house helps with stress relief and increases production of feel-good hormones like dopamine, according to USA Today.

Lucca Correia (11) adopted a bernedoodle puppy in June. “One of the biggest challenges of quarantine is finding something to do or how to spend your day,” he said. “I was able to distract myself from the boredom of quarantine by working on training my dog and spending time with him.”

Although having a dog didn’t make up for the lack of human contact and relationships, Correia’s puppy still helped him cope with social isolation, he said. “Building a relationship with my dog was something that I could look forward to and work towards, similar to one that you could make with a human — except not as complex, of course.”

Johanna Scher (11) began fostering dogs for the first time while in quarantine, and her family has since fostered seven dogs. Fostering a dog is the act of taking a homeless dog into your home, either for a predetermined period of time or until the dog is adopted. On average, Scher’s family fostered each dog for a little over a week. “The dogs rely on you,” she said. “You have to walk them and feed them yourself, and it gives you a real sense of purpose and fulfillment. You feel bonded to them, in a way.”

Many of the dogs Scher fostered had special needs and required special attention. “For example, some of my dogs couldn’t sleep anywhere but my room or my brother’s room, and they always needed to be with someone, which makes you feel not as lonely during these times,” Scher said.

Scher said that the process of fostering dogs was extremely gratifying. “I think that having another animal to take care of really makes you feel productive,” she said. “Dogs are social creatures that will always be around to play, and it’s really nice to have a reliable source of entertainment.”

Paul Wang ‘20 adopted a goldendoodle puppy and named him Sal, short for Salamander, a few months before quarantine began. “My relationship with my dog is definitely in stark contrast to interactions with friends that are socially distanced and through masks,” he said. “So I think that in a way, Sal has fulfilled, if not exceeded, the physical aspect of our relationship, but not so much the social aspect because he can’t talk yet. But we’re working on that.”

A human’s relationship with their pet is largely based on touch and physical contact. Waggoner believes there is a sensory aspect to the emotional support dogs provide. “My dog is the softest thing you will ever feel,” Waggoner said. “Dogs are called a man’s best friend for a reason.”

To a large extent, the reason behind the increase in adoption rates is the newfound free time in quarantine, according to the NY Times. Although Ellie Henes (11) was planning to adopt a puppy before the pandemic began, her dog happened to arrive right before quarantine started. “Quarantine was the best time to get her because she always had all of our attention, and we had all of the time in the world to play with her,” she said. “We always had something to do, whether it was teaching her new tricks or going on walks and running around with her.”

Samantha Tsai (12) enjoyed the presence of her two slightly unusual pets throughout quarantine: a chinchilla and a turtle. Although her pets are very low maintenance, Tsai said they helped her cope with social isolation. “We tried to train them to do tricks, which is pretty hard to do because they’re not really trainable animals,” she said. “But we’ve done a couple of things, like we bang on this sandbox and the chinchilla comes running to us, and also we now have our turtle follow our finger, which seems so small but feels like a victory to us.”

Even though chinchillas and turtles aren’t as affectionate as dogs, Tsai said her pets still reciprocate her love through small gestures. “Our chinchilla lets us pet her, which she doesn’t let any strangers do.” Tsai also is now able to feed her turtle by hand, which he wouldn’t let her do before quarantine started. “It feels like he’s accepting us more.”

In contrast to Tsai, Ariella Frommer (9) feels little to no emotional attachment to her turtle, she said. “We don’t really hang out with her a lot because she scratches and bites,” Frommer said. Her turtle didn’t help her cope with social isolation, as their relationship was solely based on maintenance.

Maya Nornberg (11) said her pets provide her with emotional support in ways she isn’t even aware of. “Whenever my pets aren’t home, I feel like the house is empty,” she said. “For a period of time, I had 30 minute cuddling sessions with my cat every day in quarantine, and it was just a part of my routine,” Nornberg said.

According to WIRED, having a pet around the house helps with sticking to a healthy routine during quarantine that can provide daily exercise and structure. Wang’s dog encouraged him to stay active and keep a regular schedule. “Having a dog really forces me to go outside in a time when I probably spend most of my time in my room,” he said.

Correia said that building a relationship with a dog is an incredibly rewarding and warming process. “A dog’s natural behavior is always energetic and happy, willing to play, and overall loyal which allows for dogs to provide great emotional support,” he said.

For Scher, fostering dogs led to a lot of interactions and conversations with her neighbors that wouldn’t have otherwise occurred. “It bridged connections within my own community,” she said.

Wang’s dog brought his family closer together during quarantine, he said. His whole family loves Sal, and they are unified around taking care of and playing with him.

“I definitely wouldn’t say that pets are a substitution for the friends we see when we go to school,” Correia said. “But to an extent I think my pet was something that helped me cope with my need for socialization and relationships.”