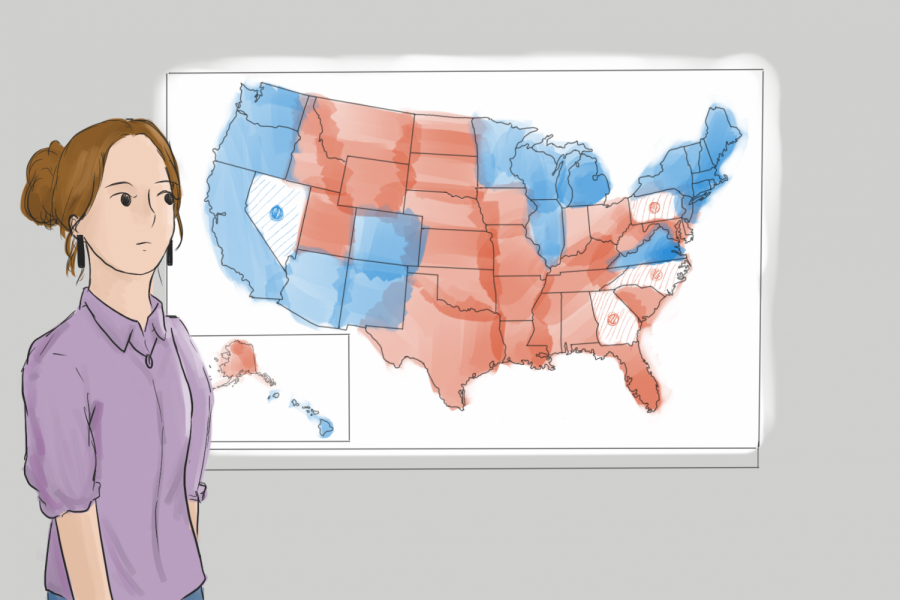 ICIE’s goal in creating these events was to support the community by giving people a space to think through the influence the election has on themselves and other people, regardless of their political views, Associate Director of ICIE Ronald Taylor said. By surveying faculty members and listening to students who reached out to him, Taylor found that members of the community were looking for places to unpack their thoughts about the election.

Taylor wanted to keep the discussion nonpartisan to focus solely on the impact the election has had on people and help them identify their personal agency. “We are not talking about red states and blue states; we are talking about how we are giving people who are asking for basic rights dignity,” he said. “What are we doing to make sure we are centering dignity to human beings?”

For Teddy Ganea (11), focusing on the broader issues surrounding the election, such as racism and educational inequity, rather than the details of who was winning and the implications of each potential result, helped clear his mind and remind him of what was most important, he said.

The master classes began with a “pulse check,” during which Taylor asked students to reflect on their thoughts and what was at stake for them in this election. Taylor then discussed civil unrest and inequity in the United States and split participants into breakout rooms.

In these breakout rooms, students and faculty members spoke about their feelings, questions, and hopes surrounding the election, as well as where they needed support. Computer teacher Dr. Glenda Guerrero said the breakout rooms were comforting, especially because she was able to hear the perspectives of students in various grades. “It just was great to hear how the middle schoolers’ reflections were the same reflections as the high schoolers,” she said. “We were unified, we were respectful, and we were listening.”

Annabelle Chan (12) said everyone she spoke with at the meeting had similar opinions to hers. Other groups with more varied opinions might have been more productive learning experiences, she said.

All of the members of Chan’s breakout room, with the exception of herself, were either middle school students or freshmen. Chan is very vocal about her political opinions, but conversing with young people who were still developing their opinions was unusual to her, she said. As a result, Chan felt as though she was conducting the conversation, she said. Despite this dynamic, seeing younger students express an early interest in politics showed her how much things have changed since she was their age, she said.

This is the first election that Athena Rem (9) has been invested in, she said. Even so, because the winner hadn’t been determined, it didn’t feel completely real to her until she attended one of the meetings on Wednesday. “The meeting reminded me what’s riding on the outcome,” she said. “It made me more aware and a little more stressed. Not in a bad way — I realized the importance that it had.”

After the breakout conversations, participants regrouped to discuss ways they could make meaningful change. “Things are going to change, but at the end of the day you all have agency despite the outcome,” Taylor said. “To be frank, it doesn’t matter who is president, it matters what you all do in your communities. Ultimately, what we do on the small level impacts larger levels.”

World Languages Department Chair Pilar Valencia said this mindset was meaningful. Everyone would love for their preferred candidate to win and fix all the country’s problems, but that is not possible, she said. Instead, the community should work to make change where possible. “Being directed to think proactively, being reminded of your agency, I think that is very powerful.”

Four years ago, math teacher Ben Kafoglis used class time to discuss the election results with his students, he wrote in an email. This year, Kafoglis chose to lead the student processing space to provide students with a similar, but more organized, environment. “[This election season] especially has impacted those people — many in our community — whose very humanity has been called into question by the President and many of his followers,” he wrote. “That kind of language, and the divisiness it wreaks, can affect us in ways we don’t realize. It’s important for us to recognize how we are being affected.”

As an immigrant woman, Valencia was very concerned about the election, and she knew that many others, regardless of their perspectives, were anxious too. To help them process everything in a thoughtful and organized way, Valencia took all of her classes to the master classes hosted by the Office for Identity, Culture, and Institutional Equity (ICIE) on Wednesday, she said. “I do believe that we are more intelligent and more powerful when we are together in dialogue than in monologue,” she said.

In addition to the general meetings, Taylor organized separate processing spaces for students and faculty members of color. He chose to do this because, between faculty polls and individual conversations, people of color in the community had expressed a need for a space to think about the unique ways in which the election affected their experiences, he said. Additionally, people of color are more comfortable sharing their uncensored thoughts in spaces intended only for them, Monitor Jaquan Shaw said. Shaw co-led the student of color processing space on Thursday.

Director of Center for Community Values and Action Dr. Kimberly Joyce-Bernard, who co-led the faculty of color processing space on Tuesday, wrote that the space focused on encouraging faculty and staff to offer their intersectional perspectives on the election season, centering their agency and strength. “BIPOC [Black, Indigenous, and People of Color] faculty and staff are not a monolith,” she wrote. “Mr. Taylor and I were intentional about creating a space where the ways in which people are experiencing and considering this election cycle, the current landscape of our country, and their personal journeys was centered.”

Although 45 minutes is not enough time for students to work through all of their emotions regarding the election, Kafoglis hoped that the meeting helped guide their thoughts, he wrote. “I hope students leave having more clarity than when they entered — maybe about their own emotions in relation to national politics, about their own place in the world, or around some of the intense emotions they’ve seen in their families and communities,” he wrote.