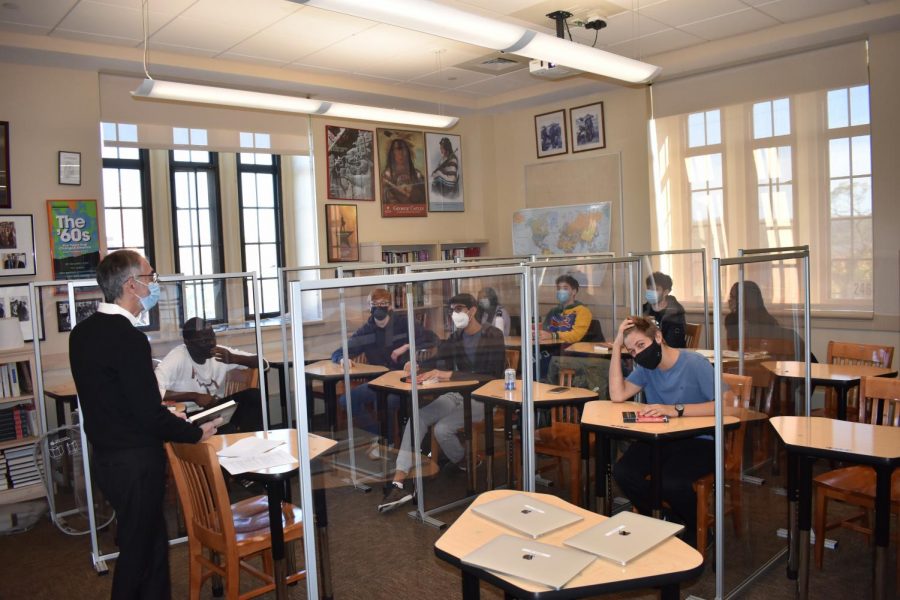 Many teachers have incorporated discussions surrounding this week’s elections into their classes to provide a deeper understanding of current events and to support their students.

Instead of continuing his regularly scheduled class on Election Day, ceramics teacher Keith Renner diverged from his lesson plan and taught his students about Ancient Greece.
In his class, Renner taught students about pottery’s connection to the history of elections and democracy. Renner created a PowerPoint presentation with pictures of shards of pottery called “ostracons” that were used as ballots in Ancient Greece, he said.

In preparation for election day, Associate Director of the Office for Identity, Culture, and Institutional Equity (ICIE) Ronald Taylor held the second faculty equity workshop focusing on the inclusion of different viewpoints in the classroom. Taylor said that the goal of the workshop was to give teachers the opportunity to work on being inclusive of all political viewpoints before they held their classes on election day.

Taylor made the conscious decision to hold the discussion the day before the election, he said. “At a time when our country is extremely polarized and divided, inclusion is ultimately what we’re going to need to weather us through this moment,” he said.

Over Zoom, Taylor went over hypothetical scenarios that teachers might face regarding political opinions and the election, he said.

The workshop began as Taylor provided research to show why inclusion is important in academic environments. In the second half of the workshop, participants went over hypothetical scenarios that emphasized the importance of inclusion, he said.

In one hypothetical example discussed, two female students announced that anyone who supported Trump was “brain-dead,” and as a result, a white male student angrily left the room. “How would a teacher feel about telling two young women to be mindful of their speech for the sake of a white male student? That’s a really interesting dynamic that actually might happen in some classes,” Taylor said. “It was a really interesting activity because I could tell people were getting nervous.”

After the workshop, many teachers held classes that differed from their regular scheduled lesson plans. In Chloe Coward’s (11) Calculus BC class, math teacher Catherine Crowley checked in with the class over Zoom. Using the chat feature, Crowley asked how each student was doing, and each student communicated their feelings privately in the chat or spoke in front of the class, Coward said. “I think she did this to get a sense of our energy and to look out for us.”

Crowley then allowed students to bring up any topics they wanted to discuss and let the students decide whether to talk about the election or do math, Coward said. The class talked about the election for the beginning of class, then played a math themed version of Pictionary, and Crowley ended the class early. “[Crowley] was very supportive as a teacher,” Coward said.

Depending on the class, Link planned to cover different topics of the election, he said. In his Global Cold War classes, Link said he focused on the political foundations of elections, such as what creates dictatorial and democratic governments. For his US History classes, he covered the election more generally, going into the makeup of the electoral college and the ballot casting process, he said.

In addition to learning about elections from a historical standpoint, Jordan Wasserberger (11) said that his Global Cold War class took time in class to discuss their thoughts and feelings about the election. “It was really nice,” he said. “It wasn’t anything too hyped up or intense. It was just a great chill way to deal with everything that is going on.”

For history classes in particular, Link said it is important to tie in current events to the curriculum. “We always want to try to connect the past and the present for students,” he said. “Thinking historically about presidential elections and how they’ve evolved over time, I think it’s really important and helpful for students to think about what’s unusual and unique about this election.”

After his ceramics class learned about the history of ceramics in the democratic process, Renner played a relaxing video to show the creation of a traditional Chinese teapot for the class. “It definitely put me in a calm place, and I wanted to be able to share that with everyone,” he said.

To end class, Renner opened a class discussion about both the video and potential anxiety surrounding Election Day, he said. Through conversation, he aimed to focus on the wellbeing of the class and not about politics, he said.

Renner decided to change the lesson plan of the class to allow his students to take a much needed break from school work on Election Day, he said. “As teachers and students, we can get caught up in the juggernaut of the curriculum, and we can forget to pause sometimes,” he said. “If there was ever a moment to pause, it’s now.”