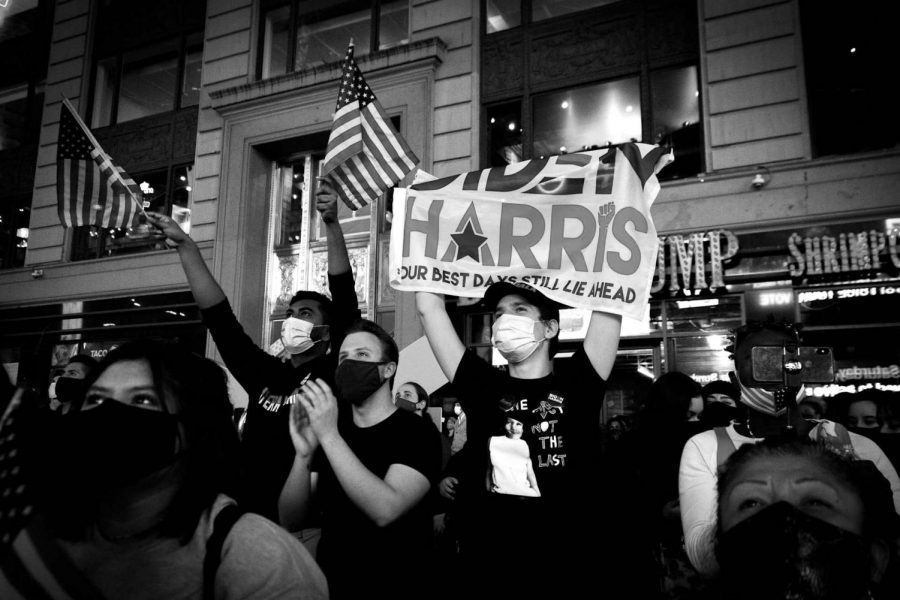 At 11:25 a.m. on Saturday, November 9, New York erupted with noise. The Associated Press had declared Joe Biden the winner of the 2020 presidential election.

Considering how long the ballot count was taking, the sudden news was shocking, Ricky Lipsey (11) said.

“I heard cheers outside before I even found out,” Avi Kumar (10) said. People honked their cars, banged on pans, yelled out their windows, and danced on the street, he said.

“I saw a lot of people with pride flags; I saw people holding signs for Black Lives Matter,” Kumar said. “I realize that [Biden’s victory] is not just about me: my life might not change, but other people’s lives will.”

The importance of the election made it difficult for Eliza Becker (11) to focus on school, because she kept checking the news, she said. She said she felt relieved when she finally heard the results because she was terrified that Trump could be president again.

A Biden presidency will bring people security, Lipsey said. “It is easier to tell your kids that being a good person matters,” he said.

Associate Director of the Office for Identity, Culture, and Institutional Equity Ronald Taylor was concerned that many people thought their lives were at stake in the election. “We as a country should never get to the point where people literally feel that if a leader is not elected, they are not safe and their life does not matter,” he said. “The value of human life should never be on a ballot.”

English teacher Jennifer Huang was glad that she could finally stop worrying about the results on Saturday.

“For the last seven or eight months, there’s been this feeling of ‘I don’t know what the future holds and I can’t plan for it’ because of the pandemic, and that really wore on me,” Huang said. “Having this measure of certainty is the biggest source of relief.”

Huang’s joy was reflected across the city as people celebrated Biden’s victory of over 77 million popular votes, the most any candidate has won in an American election.

“Every once in a while, New York City comes together in a magical way,” Logan Dracos (11) said. “This normally happens after some sports event, such as when the Giants won the Super Bowl in 2012.” Despite not being specific to New York, Biden’s win was one of those moments, he said.

Vice President-elect Kamala Harris also made history as the first Black and Indian woman in her position.

Taylor said Harris’ success showed the necessity of electing people who reflect the American population. He appreciated when Harris echoed that in her victory speech on Saturday night, saying “while I may be the first woman in this office, I won’t be the last.”

However, President Donald Trump has refused to concede the election. “Everybody is celebrating [in NYC], but according to half the country, Biden has not even won,” Lipsey said. This reality curbed his desire to celebrate.

Upper Division Dean of Faculty Dr. Matthew Wallenfang said while he hopes there will be a peaceful transition of power, he worries this might not be the case when there is a large number of people who believe the election was stolen from Trump.

“From what I’ve seen, it is a position that might be held by a very significant part of those 70 million people who voted for President Trump,” he said. “That, to me, is very sobering as we think about what the next two months are going to look like.”

Additionally, Huang said it is important to note that Biden’s victory does not mean an immediate end to problems in the country.

Coronavirus, climate change, racism, and misogyny continue to exist, Huang said. “There’s a lot of work left to do, such as rooting out systemic racism — Biden is a step in the right direction, but that doesn’t mean there aren’t still going to be racists in America,” she said.

The election alone will not bring the sweeping changes that many people want, Lipsey said. “I have seen so many people become so focused on this election that they forget how the actual government works,” he said.

Biden’s ability to pass policies lies in the fate of the Senate elections, which will be decided by two Georgia runoffs in January. If Republicans maintain control over the Senate, Huang fears branches of government will not collaborate and filibusters will continue to be the norm, she said.

The presidential election made clear the partisan nature of American politics in 2020: over 72 million people voted for Trump and over 77 million for Biden.

However, Biden demonstrated his willingness to unify the country in his victory speech, Kumar said. “[Biden] said several times that he’ll be a president for all Americans, and it is something that I don’t think Donald Trump would ever say,” he said. “I feel like that’s what separates the two: Donald Trump really believes in partisan divisions, while Joe Biden doesn’t.”

Taylor said the Biden administration must seek to heal not only divisions between political parties but also systemic racial inequities. One example is how the coronavirus harms Black, Latinx, and Indigenous communities at disproportionate rates, he said.

“If I were to look at a room and be able to say that everyone in this room is getting the resources that they need so they can access the full rights of a human being that’s worthy of dignity and respect, that’s unity to me,” Taylor said. “Diversity, plus inclusion, plus equity, plus justice equals unity.”