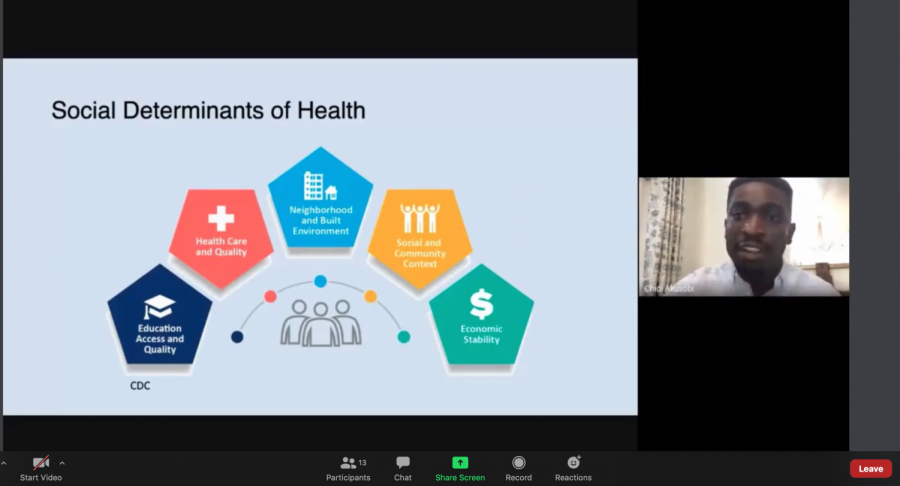 On Wednesday, Dr. Chidi Akusobi ‘08 returned to the school to host a virtual assembly and a talkback, where he spoke about the social determinants of health: the effects that education, healthcare, location, community, and economic stability have on people’s access to good healthcare in the United States. Akusobi stressed that Black and Brown people across the United States have been disproportionately affected by the pandemic. “COVID-19 has shined a light on how the medical system fails Black and Brown Americans,” Akusobi said. “Zip code matters more than genetic code when it comes to your health.”

In the assembly, Akusobi also emphasized the importance of the upcoming vaccines combatting Black Americans’ justified fears and skepticism towards the United States’ medical system. By having a testing group that reflects the racial makeup of the US population, companies like Pfizer and Moderna are more likely to garner trust in their vaccines from Black Americans across the country, he said. Once these vaccines are available to the general public, Akusobi said that the first batches should go to communities of color across the United States, the communities that are most in need of them.

Akusobi is a seventh-year MD-PhD student at Harvard Medical School focused on infectious disease and microbial evolution, which is why Bartels chose to invite him to speak at the assembly, Bartels said.

SARS-CoV-2, the coronavirus, is more contagious than other forms of SARS because of its extra amino acids, Akusobi said. These extra amino acids allow SARS-CoV-2 to infect the upper respiratory tract more easily, and they make the virus far more likely to spread asymptomatically.

Akosubi originally developed a love for science through classes such as AP Biology and AP Chemistry, he said. After graduating high school, Akusobi briefly worked for the National Institutes of Health and then continued his education at Yale University, where he studied evolutionary biology. Afterward, Akusobi conducted research for a year on biochemistry at the University of Cambridge in England. Completing rigorous science classes at the school gave Akusobi the confidence to pursue his interests even further by taking more “hardcore courses” in college, he said.

Students and faculty were excited to hear Akusobi’s assembly as he had a unique perspective on the state of the pandemic, and vaccine, Bartels said. Myra Singh (11) was especially interested in Akusobi’s discussion of the biological makeup of the pandemic and the reasons why it is such a highly infectious disease, she said.

Additionally, Luke Harris (10) said Akusobi’s presentation did a great job highlighting the various factors that affect people’s health. “It was really insightful the way he was able to identify how other factors influenced the spread of the virus, and why the virus hit Black and Brown communities particularly hard.”

Science teacher Dr. Christine Leo said Akusobi presented the information in a very captivating way. “His unique perspective as a researcher, physician, person of color, and immigrant provided me with so many thought-provoking connections,” she said.

In addition to combating the misinformation surrounding the pandemic and discussing the social determinants of health, Akusobi’s goal during the assembly was to dispel the myth that successful people have their whole lives figured out during high school. In his experience, when alumni return to discuss their careers, the way that they tell their stories can make it seem as though their paths were perfect, he said. Akusobi stressed that in reality, this is not the case. “There’s no need to feel like your path from high school to whatever degree you end up doing in the end is incredibly linear, because that’s just how stories are told. But that’s not actually how life is lived.”

Bartels said it is important for students to hear about the struggles that alumni have in finding their career, as many students feel that everyone else has their entire life together. Bartels said she hopes that by listening to alumni tell their stories, students will see how their high school experiences can shape the rest of their lives.

Akusobi is an example of a member of the school community who is using his studies in medicine and science to improve people’s lives, math teacher Christopher Jones said. The reasoning skills that Dr. Akusobi learned during his time at Horace Mann are helping him to make the world a better place,” Jones said.

Akusobi ended the assembly with a note of optimism when he discussed the Biden-Harris administration. He said that having a leader who wears masks, supports frequent COVID-19 testing, and communicates effectively with the public should make the United States more prepared for future pandemic outbreaks.