“How to Paint a Dead Man”: Bauld publishes poetry collection 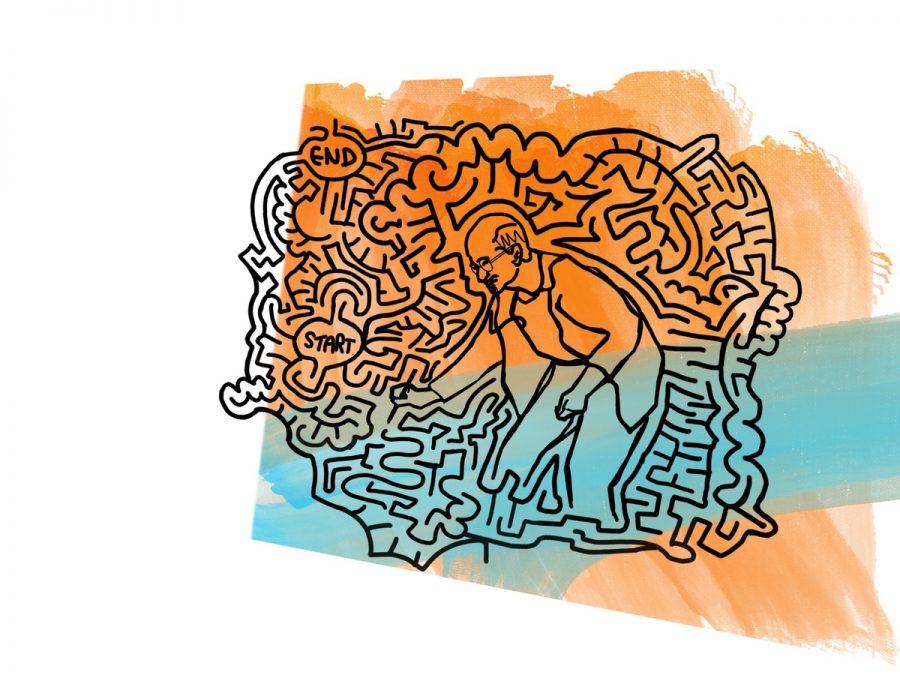 Last week, English teacher Harry Bauld published his latest collection of poetry titled “How to Paint a Dead Man,” a set of 24 works centered around themes of art and death.

The title of Bauld’s newest book, his third published work, is inspired by the first instructional book on painting, written by Cennino Cennini in 1437. Within it, there is a section titled “How to Paint a Dead Man,” a phrase which inspired Bauld to write a poem interspersed with quotes from Cennini’s handbook, he said.

Bauld writes poetry as it comes to him, taking inspiration from specific events in his life, he said. He often writes without specific intent; the poems he creates are not necessarily designed to be part of a larger collection. As a result, the collection incorporates a range of works: some are satirical, whereas others are dark, weaving together the mundanity, delight, and grief that are a part of life, he said.

“There’s a way that poems start to stick together,” he said. “You realize: ‘I’ve been working on one particular theme without even realizing it or admitting it to myself.’ And suddenly there’s a body of work.”

The poems in Bauld’s book cover a wide range of topics, but they ultimately come together cohesively. “I like to use a metaphor of a braid when talking about books [of poetry], because there are thematic metaphors that run through the collection,” he said. The poems in this book are centered — both in content and form — around the themes of art and death.

Bauld’s interest in visual art combined with his poetic fascination inspire the works in this book. “Most of the poems in this book are ekphrastic, meaning they are poems about works of art,” he said. “But they are about death, too, and how [the two] can come together.”

Bauld began the process of publishing the anthology two years ago, just after the completion of his first collection of poems. “[I was thinking] ‘Here’s this poem, and here are these other poems starting to gather around it’,” he said. “I can do something with this.”

To decide on an order for his manuscript, Bauld laid 50 pages of his own poems on the floor of his home. He walked through the maze he had created with a pen in hand, crossing out words on some papers and adding line breaks on others.

Bauld compiled the pieces and sent them to dozens of publishing houses, he said. “They all said — as publishers will say — ‘no, no, no, no.’ But then, a couple months ago, one said ‘yes.’”

When Bauld heard back from the publishing company — Finishing Line Press, based in Kentucky — it had been over a year since he had looked at a copy of this original manuscript.  “It was a great benefit to look at the works with a set of fresh eyes,” he said. “I looked at it again and I was like ‘oh, there are some poems I’ve been writing recently that fit here.’” Half of the poems that are included in the book were written two to five years ago, and the other half were written in the last year, he said.

The third poem in the book, “I Drop Mark Strand into The Toilet at The Mansion,” is characterized by its accessible narrative and humorous plotline. It follows a true occurrence in Bauld’s life: a moment he dropped a book of poetry into the toilet at a diner.

The poem is filled with lyrical musings and comedic word play. Bauld takes the book into the bathroom because he does not want “to leave Mark stranded (sorry!),” and he watches as it “slips from its high perch atop the Pulitzer.” After he has rescued the book, he comments that this was “not the relief [he] was looking for,” and “of course there are no paper towels to dry [himself] of the drenching reek of poems.”

While this work is light and playful, others are more profound. In “Death Penalty,” Bauld writes about the death of his father, interrupting his own language with that of a news report from the shooting at Fort Lauderdale airport in January of 2017.

Art history teacher Dr. Anna Hetherington pre-ordered the book as soon as she heard about it, and she recently finished reading the collection. Because she is knowledgeable about art and art history, the collection resonated with her, she said. “There’s a lot of evocation of song and of paintings, of works of art,” she said. “It’s poetry that deals with other mediums and also is very contemporary and at the same time very lyrical. It’s wonderful.”

Hetherington’s personal experiences have given her a closer relationship to the text. “You know the paintings; you know the songs,” she said. “I know Mr. Bauld, so that all gives a more nuanced reading of the art.”

Although Hetherington has only recently finished reading this collection, she has already found herself coming back to several of the pieces, she said. Some of the pieces, such as “Eyes,” and “Me and You, Canaletto,” seem relevant to the current moment, she said.

The cover of the book is Rembrandt’s painting “Anatomy Lesson of Dr. Nicolaes Tulp,” an image of men hovering around a dead body. Bauld chose this painting because of its multiple connections to the text — his ekphrastic work in this collection includes poems about Rembrandt’s art, and this painting literally symbolizes the title of the book, as Rembrandt had to know “how to paint a dead man.”

After years of work, Bauld’s book is now published. “I have other stuff that I am excited to be working on,” he said. “And I hope people enjoy this one.”