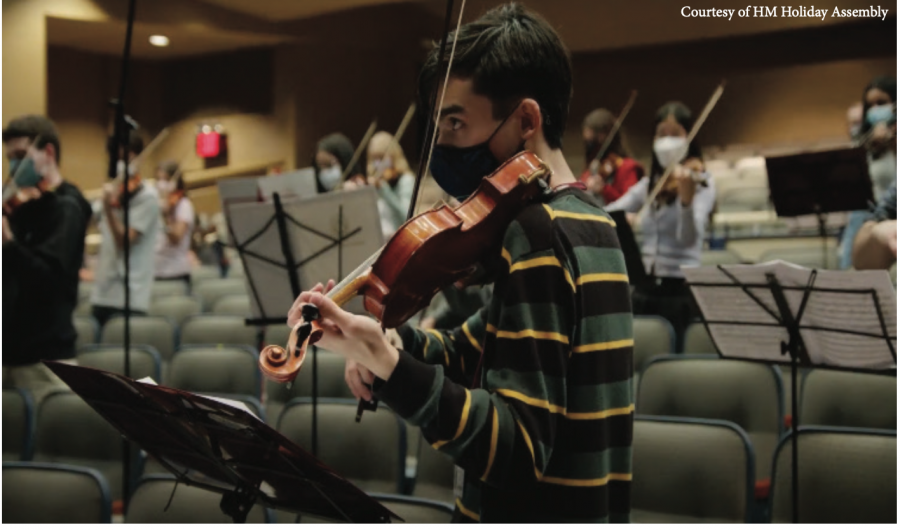 On Wednesday, December 16, the school held its first ever online holiday assembly, showcasing various student performances and a strong festive spirit to close out the year. While only spanning 31 minutes, Head Librarian Caroline Bartels began her preparation weeks in advance, she said. “It takes a while for everything to come together because there are so many moving parts.”

Eli Scher (12) started the assembly with his senior reflection, in which he discussed how students can be a positive influence in the environment around them. His motivation to share his senior reflection was to help at least one of his peers realize the value of coming into their “true, genuine self,” he said. “It’s pretty obvious when someone changes their personality in different situations, it’s so important to be yourself and never forget who you are,”  he said.

Scher’s reflection was followed by 60 Seconds of Peace, which included a communal lighting of candles. After Scher, the assembly featured performances including the Steel Drums Ensemble’s rendition of “Blinding Lights” by The Weeknd.

“We decided we were going to perform ‘Blinding Lights’ during our first class of the year,” Ari Salsberg (12) said. “Since then, we have learned and practiced the song every class period, so it has definitely a lot of work in the making.”

Salsberg said he believed the song’s energy would appeal to students. “It’s a well known, upbeat song, so I hope some students recognized it and sang along,” he said.

Ariela Shuchman (10) was impressed with the ensemble’s performance. “I really enjoyed the steel drums performance,” she said. “‘Blinding Lights’ is one of my favorite songs, so it was really fun to see it performed on the steel drums.”

Shuchman was struck by the players’ skill and level of practice. “It looked really difficult, but they played the whole song with ease and energy,” she said.

The assembly also featured various silent films from Theater teacher Haila VanHentenryck’s Acting for the Camera class, including: “Pursuit,” “The Lunch,” and “The Unlikely Scholar.” Emily Sun (12) starred in both “Pursuit” and “The Lunch,” and discussed the hard work the students put into their films.

“It took us over two to three weeks to film and edit our silent films,” she said. In fact, Acting for the Camera sent seven films to Bartels for her to choose between, and she eventually narrowed them down to the three shown on Wednesday, Sun said.

Anna Miller (10) enjoyed the film’s lightheartedness. “They provided much needed comedic relief during a really hard week,” she said. “They did a really great job.”

While Ria Chowdhry (11) found the holiday assembly enjoyable, she did notice obvious differences from prior years. “It did feel less festive than in years past,” she said. “Though this was probably just due to the fact that we all weren’t celebrating in Gross Theater together, an undeniable consequence of online school.”

“The real challenge of all these assemblies is making them feel as normal as possible,” Bartels said. The combination of an online and in-person audience for each assembly has been extremely challenging, as distributing Zoom codes and ensuring social distancing become overwhelmingly complicated, she said.

Despite this, Bartels tries to remember that assemblies are not “Broadway productions” and do not have to be perfect, she said. “Watching it all come together in the end with people who haven’t seen it is so rewarding.”

Chowdhry was still grateful for the work put into the assembly and believed that the school made the most of the given circumstances. “Even though we watched a pre-recorded video in our individual advisories, it did have a communal feeling,” she said. “The holiday assembly is a necessary send off as students head into break and the new year.”