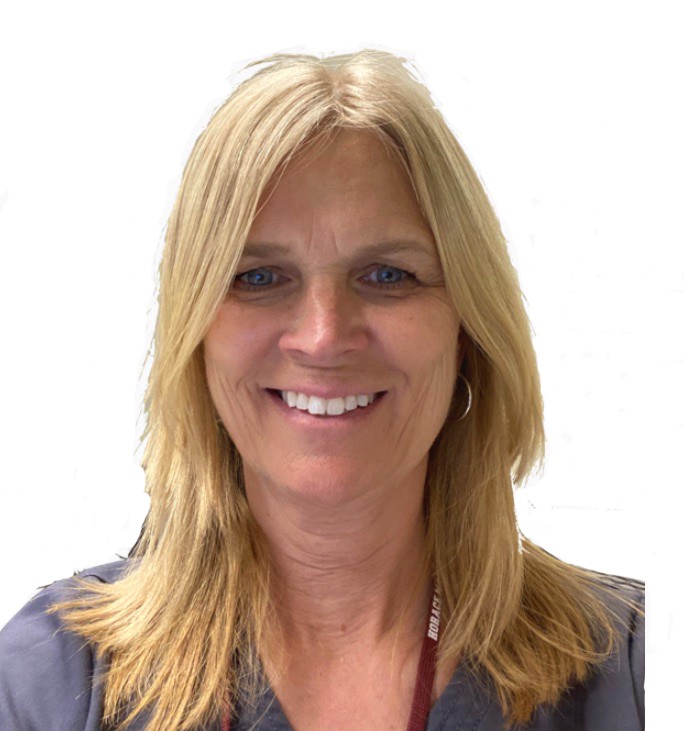 School nurse Nancy Jensen was halfway through an endoscopy when the patient began to throw up. The doctor, who was pregnant at the time, became sick as well upon seeing the patient. Rather than panic, Jensen sat the patient up, pulled the scope out of her gastrointestinal tract, and found someone to look after the doctor.

“[The patient’s] husband was thankful that we were there and cared for her like we would have done for our own family,” Jensen said. Moments like this, where she can make a difference in someone’s life, have kept her going during her 34 years as a nurse.

Jensen brought her nursing experience to the school this September. She and Nurse DeAnna Cooper handle immunizations, student injuries and illnesses, and contact tracing for COVID-19.

Jensen decided she wanted to study nursing when she was 17, she said. “I always wanted to be a mom because I wanted to care for people, so I decided to be a nurse.” She graduated from Kingsborough Community College with an Associate Degree in Nursing in 1987.

After college, she went to nursing school, where she learned how to administer morning care, medication, IVs, and more. “When I was a student nurse, I had no idea how to diagnose a situation and handle it on my own,” she said. “It’s scary when you don’t know what you’re doing.”

Jensen knew she could not be a pediatric nurse because it was difficult for her to see children with abusive parents or illnesses, or those at the end of their lives, she said. “I would drive home crying every single day of the three month [pediatric] rotation.”

However, she enjoyed working with labor and delivery. “It was to witness a miracle every time a child was born,” she said. “I almost wanted to push the doctor over and say, ‘Let me catch the baby.’”

Once Jensen passed the tests to become a registered nurse, she took her first job as a medical-surgical nurse at Kings County Community Hospital, where she worked from 1987 to 1989.

She then became a supervisor at a nursing home in Victory Memorial Hospital for five years, overseeing 150 residents and six nurses. The job taught her how to make quick decisions under pressure and use critical thinking to assess patients, she said.

“I was very nervous at that time because I was a young nurse,” Jensen said. Even choices such as whether to call an ambulance when a patient fell from their bed were nerve-wracking, but she grew more confident as she accumulated experience.

These critical-thinking and response skills were crucial when she worked as a visiting nurse between 1998 and 2003, Jensen said. She met patients in their homes and had to decide how to treat them by herself.

Once, she was taking care of a patient with mad cow disease when he started to bleed, and she could not stop it, Jensen said. “I freaked,” she said. “I remember thinking, ‘Oh my goodness, what am I going to do?’” She dialed 911 in time, and the patient recovered.

From 2003 to 2010, Jensen worked at the Morristown Medical Center Gastrointestinal (GI) Suite. She was often on call, which meant she had a beeper that would sound any time she was needed at the clinic for an emergency.

“I was laying in bed at two a.m. one morning, and the beeper went off,” she said. “A patient was bleeding out.”

Her past experiences in high-stress situations helped her stay calm and rise to the challenge, she said. On the 40-minute drive from her home to the hospital, she prayed and listed all of the tools she might need to help the patient, so that she was ready upon arrival. “If I didn’t have the right equipment, their life was at stake,” she said.

Another time at the GI Suite, she noticed a patient had started to tear at his clothes. She recognized it as a sign he was about to go into respiratory arrest and immediately called a rapid response team. They tried to save him, but the patient did not make it.

The incident happened because of the domino theory, where one medical error caused a chain of events that had fatal consequences, she said. “For weeks afterwards, I thought, ‘What could I have done differently? Did I cross every t and dot every i?’” She even considered the possibility that nursing was the wrong path for her.

By reviewing where communication between the patient and other medical personnel failed, she learned how to prevent similar scenarios in the future, she said. “Policies are reworked based on mistakes, and unfortunately, there has to be an adverse patient event in order to move forward.”

Jensen’s most recent job prior to working at the school was as a nurse at the Wound Healing Center at Morristown Medical Center. She began to work there in 2007 and treated wounds such as pressure, venous, and arterial ulcers.

“A human being is like an onion: you have to peel back the layers and get to the core to see what’s going on,” she said. Even though a wound was on one area of the body, she needed to examine a patient’s entire body and medical history to determine the right care. “We didn’t just treat the hole in the patient, we treated the whole patient,” she said.

Over the years, Jensen developed close relationships with the patients who came to the clinic weekly, she said. While she had compassion for them, she also learned to step back from situations so she could assess how to help her patients as a nurse.

“If I let a patient sink and I sink with them, then we’re both sinking,” she said. “Instead, I tell them that ‘I will let you cry, but I will also make you stand up, dust yourself off, and work towards getting better.’”

At the start of the pandemic, Jensen enforced policies to keep elderly and immunocompromised patients safe, she said. The clinic allowed one patient in at a time, instructed them to wear masks, and allowed families to FaceTime one another from outside the clinic since they could not enter.

“The unknown was scary, but I had to be strong while I was at the clinic,” she said. “When I got home, I could have a moment alone in the shower or in my bedroom where I could fall apart and regroup.”

After 13 years at the Wound Healing Center, Jensen decided to step down and let younger nurses, who she mentored, take her place, she said. She joined the school because she wanted to try school nursing.

Jensen is also pursuing a Master’s in Nursing Education from Chamberlain University. In the future, she hopes to teach nursing courses online or at clinics.

Her education at nursing school was often fear-based: she felt like she could not make mistakes, which hindered her learning and self-confidence, she said. As an educator, she wants to empower new nurses so they have faith in their abilities. Otherwise, they cannot apply their knowledge and make decisions in real-life situations, she said.

“You are empowered when you feel confident, and nurses need to be empowered,” she said. “We are the first line of care.”