Born this way: Amy Mojica has promoted wellness since childhood 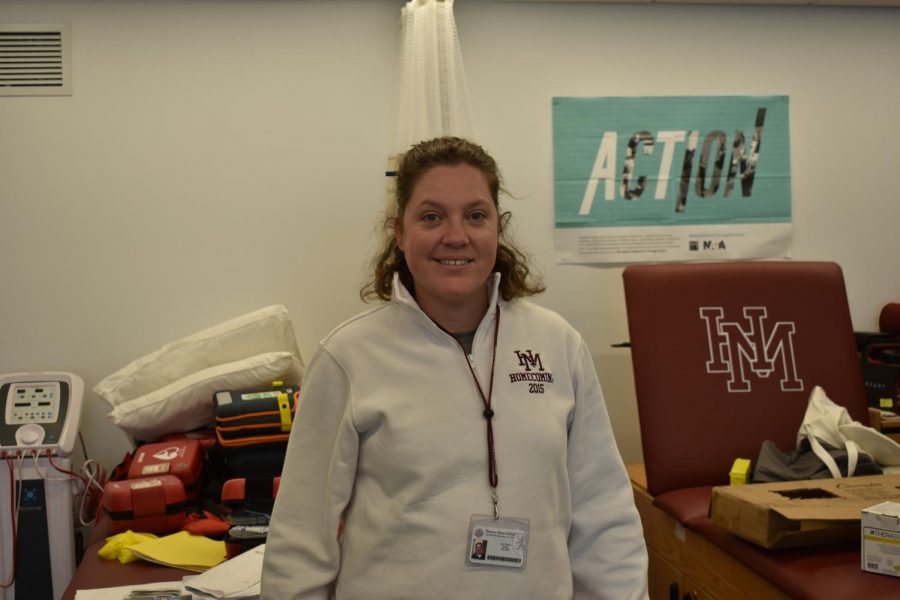 “I have been tying ice bags in the athletic training room since I was three years old,” said Head Athletic Trainer and Assistant Athletic Director Amy Mojica. Mojica’s father was an athletic trainer, so she always knew she wanted to work in the health field. She would accompany her father to competitions, watching games from the sidelines, meeting teams, and observing as he assisted with injured players.

Rather than following in her father’s footsteps and majoring in athletic training, when she enrolled at the University of New Hampshire, Mojica decided to study medicine instead. “All of a sudden I was like, ‘I don’t want to do exactly what my parents are doing,” she said.

At the end of her first year, however, Mojica realized she had made the wrong decision. “For me, it was a lot of classwork and not hands-on fun stuff,” she said. “You’re taking the organic chem, you’re slugging through all those classes, and you just feel like it’s boring.”

Over the course of freshman and sophomore year, Mojica switched her major from pre-medicine to nursing to psychology, before landing on the athletic-training major in the middle of her sophomore year. She fell in love with the immersive courses she was taking for her degree, she said. “You’re doing kinesiology and anatomy and physiology, but you’re also interning as a student athletic trainer and working with a team, so you’re immediately implementing everything out on the field,” Mojica said.

As a result of her late switch, Mojica spent an extra semester in school before graduating in December of 2004, she said. Following her graduation, Mojica worked as a head athletic trainer for a football team that required her to constantly travel, and as a result, she began craving more stability in her professional career. Through a recommendation from a college she had applied to work at, Mojica found her way to the school, where she was hired as the Head Athletic Trainer.

Mojica always considered teaching as a potential career path. In college, she took some teaching classes with her athletic training ones. Those, along with some jobs as a substitute teacher during college breaks, sparked her interest in higher education. While working at the school, Mojica decided to earn her master’s degree and spent three years taking night classes at Lehman College, she said.

Now, Mojica’s job requires her to prep for her classes, check in on athletes, and sanitize supplies to prevent the spread of COVID-19, she said. “Every day is a mash-up of running from one task to another, which is awesome because it’s different all day, but it’s also a lot of balls to juggle in the air,” she said.

In addition to working as Head Athletic Trainer, Mojica runs the Athletic Training Department and Sports Medicine, where she works alongside a staff of two assistant athletic trainers to manage sports injuries. She oversees impact testing and concussion protocol and facilitates the Habitat for Humanity community service program that sports teams participated in up until this year. Two years ago, Mojica became the Upper Division Physical Education Department Chair, where she serves as the voice of the department for all public information regarding physical education activities and curriculum.

Director of Athletics, Health, and Physical Education Robert Annunziata said he is in awe of Mojica’s ability to manage all of her roles within the department. “Her impact directly relates to our school core values, especially that of maintaining a safe, secure and healthful environment,” Annunziata said. “[Mojica] embodies that every day — she goes beyond just addressing her immediate responsibilities and looks at the holistic approach to everything she oversees.”

Mojica enjoys the freedom she has in expanding programs, solving problems, and exercising her creativity. She created the sports medicine program in the Middle Division (MD) and the expansion of the health program in the Upper Division (UD), she said.

Because the MD didn’t have enough space in their P.E. rotation, Mojica designed a sports medicine class. The program took a group of students into the old athletic training room in order to teach them the fundamentals of athletic training.

Mojica taught them the basics of anatomy, physiology, first aid, and taping. “They also got to sit in the ice tub and feel what it feels like and measure their flexibility in the hot and the cold,” Mojica said. “It teaches them the importance of warming up before sports.”

However, the program is no longer running, since Mojica needed to focus on the UD’s new Health program, she said. The transition to semesters for the academic year meant that the P.E. department had to implement a quarterly rotation for their curriculum.

“But what happens if you switch the classes of Phys. Ed to quarters is you lose 10 days –– from 30 to 20 –– which is an enormous amount of time,” Mojica said. “We had to find a solution to make sure that we’re not shortchanging this information.”

With that in mind, Mojica worked with the department to extend the student health requirement to one class sometime within the ninth and tenth grades and then again in 11th and 12th. “This way, you get a little more flexibility of working it into your schedule, which is a benefit, and we gained 10 days rather than losing time,” Mojica said.

Assistant Athletic Trainer Jaime Pachesa admires Mojica’s dedication to boosting her health students’ education, she said. “During the day or after school when [students] come for evaluations or with any sort of health question, she’s very knowledgeable and she’s always willing to take the time to listen and to teach,” Pachesa said.

Mojica recently designed the training suite next to the new fitness center. Mojica improved on the previous training room by adding an ice bath, a private doctor’s office, and a separate room for water coolers.

Mojica has loved watching students’ successes and being there for their injuries and recoveries from middle school to high school, she said. As a former athlete herself, she understands that athletics comprise a large portion of peoples’ identity and that injuries can take mental tolls.

“To work with somebody — especially with those who have major injuries — to get them back to the point where they’re back on the field, back on the court, ready to face adversity, it’s really amazing,” she said.

Annunziata said Mojica’s attitude and passion towards her work is telling of her impact on the school. “Her approach to the wellness of Horace Mann, in and out of the department, is something she has always embraced with enthusiasm,” Annunziata said. “We are very fortunate to have her at HM, and for her care for the overall well-being of our community.”