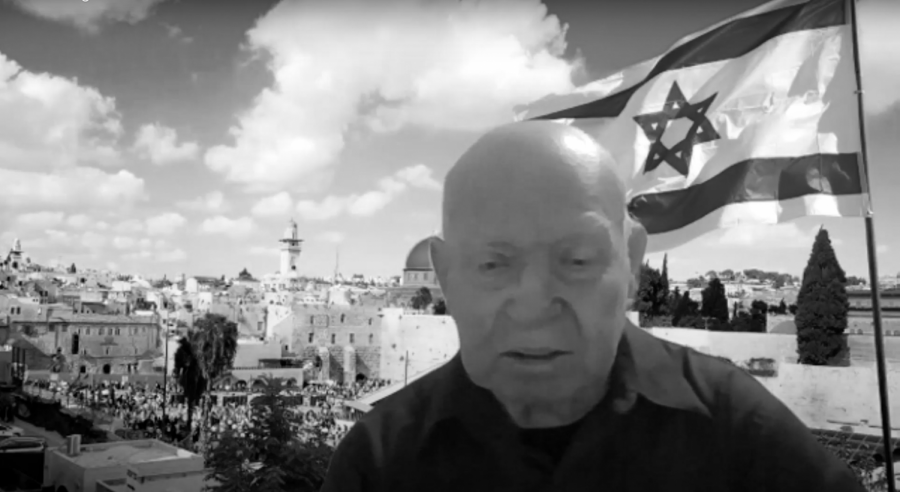 The Jewish Culture Club (JCC) invited Holocaust survivor Sami Steigmann to the school last Monday and Thursday for a presentation and Q&A on the history of the Holocaust and modern-day antisemitism.

Steigmann was born in 1939 in Czernowitz, Romania, which is now part of Ukraine. In 1941, Nazi soldiers deported his family to the Mogilev-Podolsky labor camp in Transnistria, Moldova. There, he endured Nazi medical experiments that inflicted lasting harm to his health.

After the Soviet Union’s Red Army liberated the camp in 1944, he spent 11 years in Transylvania, Romania, and seven years in Israel before he immigrated to the United States in 1968. Steigmann became a speaker to educate people about the Holocaust and share his message of resilience.

Jack Crovitz (12), Co-President of the JCC, met Steigmann when he gave a presentation to his B’nai Mitzvah class at the Tamid Synagogue in 2016. Crovitz invited him to speak at the school to teach students about the history of the Holocaust and how it shapes sectarian violence today, he said.

In his presentation, Steigmann emphasized that the Holocaust did not begin with concentration camps. Instead, Germany first

“Learning about the Holocaust is not memorizing that Hitler murdered six million Jews,” he said. “It is understanding how ordinary people were convinced that it was required.”

It was eye-opening to hear from someone with first-hand experiences of hatred against Jewish people, JCC Co-President Henry Owens (12) said. “It’s important to learn about antisemitism so I’m not stuck in my echo-chamber at a school with a huge Jewish population, because that’s not what the world looks like.”

Holocaust education in the U.S. does not teach this history enough, Steigmann said. He cited a 2020 survey by the Claims Conference, an organization that seeks compensation for Holocaust survivors from the German government. The survey found that one in ten Americans believe the Holocaust is a myth and 31% of Americans do not know that the Nazis killed 11 million Jews, Roma, Poles, Jehovah’s Witnesses, disabled people, and LGBTQ+ people.

Hearing first-person accounts of the Holocaust makes the history more personal and meaningful, Naomi Yaeger (9) she said. “In 10 years, we might not have any more survivors, so we should listen to them while we can,” she said.

If people do not learn from the past, atrocities like the Holocaust can reoccur, JCC adviser Oleg Zvezdin said. “By understanding exactly what allowed the Nazis to destroy millions of Jewish people, it will hopefully let us look for signs of it and prevent that level of destruction in the future.”

In addition to the history of the Holocaust, Steigmann spoke about its impact on the current world through Zionism, the desire for a Jewish state in the state of Israel. When his family moved to Israel in 1961, Steigmann felt like he had returned to his homeland, he said. Jewish people need their own country where they can escape persecution, and during the Holocaust, Jews died because they did not have one, he said. Antisemitism and anti-Zionism are alike because denying Jewish people their own country is akin to discriminating against them, he said.

When discussing Zionism and antisemitism, Steigmann encouraged people to have conversations, not confrontations. “When you talk to someone who has a different opinion, ask them, ‘Why do you feel that way?’ Don’t tell them that they are wrong and you are right,” he said.

Steigmann also stressed the importance of using precise terminology when describing the Holocaust and comparing it to current events. For example, there are no concentration camps in the U.S. today, he said. Although the migrant detention centers along the U.S.-Mexico border are unjust, they are not concentration camps because there is no threat of execution.

Concentration camps do exist in Xinjiang, China for the Uighur people, a Turkic ethnic group, he said. These camps can be classified as such because the Chinese government deports Uighurs to the camp, subjects them to physical and sexual abuse, forces them to give up their culture and religion, and indoctrinates them to the Chinese Communist Party.

Owens has heard people liken the Uighur camps to the Holocaust while others reject the comparison. “It was really powerful to hear an actual Holocaust survivor say, ‘This is a humanitarian crisis, this is a genocide, and there are concentration camps,’” he said.

Even though there are no concentration camps in the U.S., there are neo-Nazis, Steigmann said. He encountered them in 2002 when he received 2,500 Deutsche Marks from the German government as compensation for medical experiments he endured in a concentration camp as a child.

In response, neo-Nazis on The Daily Stormer, a far-right message board, called him a “Holohoaxer,” he said. Instead of being angry, he used the post to teach people about Nazi medical experiments and show how ignorance can lead to discrimination and violence.

“There is a much more dangerous virus than COVID-19, and that is antisemitism and hatred,” Steigmann said. “The only way to eradicate it is through education, so you have to educate yourself, stand up, and not be a bystander.”