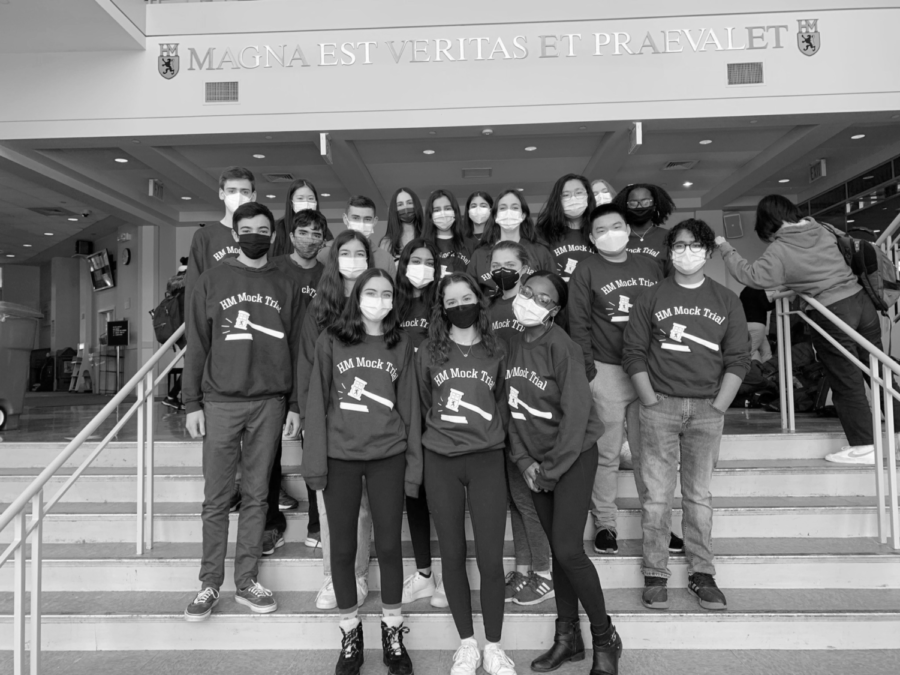 On Tuesday, Mock Trial’s plaintiff team won its case against James Madison High School in the preliminary round of the New York State Bar Association (NYSBA) tournament. This win followed the defense team’s win against Jamaica High School one week ago. These consecutive victories advanced the club past the preliminary rounds and into the following round of 32, President Ericka Familia (12) said.

This year’s case centers around a former child prodigy who was suing her parents after they had invested the profits from her early musical career into a fraudulent company, losing all the money they had saved for their child. During the trial, the plaintiff team argued that the parents had mismanaged their child’s money and were obligated to reimburse her, while the defense argued that the investment was well-intended at the time, Avi Rao (10) said.

After the club presidents, Familia, Rachel Kuhn (11), and Sabrina Freidus (12), received the case assignment and handed out the witness and attorney roles shortly after Winter Break, the club began work on their case, Freidus said. “It’s been a long time coming,” she said. “It’s a lot of work to create a case because you have to come up with the story that you’re going to tell, and then you have to write your individual materials too.”

The club presidents stressed organization this year, meeting about twice a week after school as a club and then in smaller groups in the weeks leading up to the tournament to write and practice witness affidavits and lawyer examinations. The effort ultimately paid off, Familia said. “We were able to form a very cohesive team this year,” she said. “We all work very well together and that certainly contributed to our success.”

The fact that many members of the team had competed in Mock Trial tournaments in years prior also contributed to the positive team dynamic, Freidus said. Since a large portion of the team understood the structure of the trial, the group was better able to comply with the formalities of the event and act professionally.

The opposing side acted aggressively, pressing witnesses for answers and constantly objecting, Rao said. This created a rocky start to the trial, as after a particularly confusing question, one of the school’s team’s witnesses was almost impeached — meaning their answer to an examination question was inconsistent with their affidavit, Juliette Shang (11) said.

However, the school’s team was eventually able to use the opposing team’s aggressiveness to their own advantage. “We proved to be calm, and we respected their witnesses more, so I think that was a big factor, that we were more professional,” Rao said.

Another challenge the team has faced both in this trial and throughout the year was the new online format of the event, Jared Contant (10) said. Over Zoom, it is harder to make impressions on judges and speak persuasively; a major challenge for the club was figuring out how to recreate the process of a case online.

In addition to the new online format, the club’s presidents also made the decision to create two teams within the club: an inter-school team that only competes in scrimmage trials. and a NYSBA competition team that competes in rounds of the NYSBA tournament like the one on Tuesday, Kuhn said. This setup benefits the club, as the two teams — both with a plaintiff and a defense — allow the members to expand their capacity for competition — a Mock Trial team is only allowed to have 12 competitors at any given time and the current combination of teams allows for 24 members.

This change also allows new members of the club to develop their skills before participating in real competition, so those members and the NYSBA competition group will both be stronger in coming years, she said.

While the inter-school group did not compete in the most recent rounds, they played a role in the club’s meetings and preparation for the case, Freidus said. For example, she incorporated parts of the closing statement from the inter-school team into her own work. “There have definitely been ideas going back and forth,” she said.

After winning the trial, the team came together in a collective Zoom call to debrief and spend time bonding over the events of the trial, Contant said. “We can just sort of laugh at all of the funny quotes that come out from the trial because everyone’s trying to project themselves as being more formal, but at the same time, some casual vocabulary is going to come out and mix with the legal speak in a funny combination of ways.”

Winning the trial was not only a relief but rewarding as well, Familia said. Since their competitors were so strong, she feels that the team was able to gain additional skills that will hopefully help them in future trials.