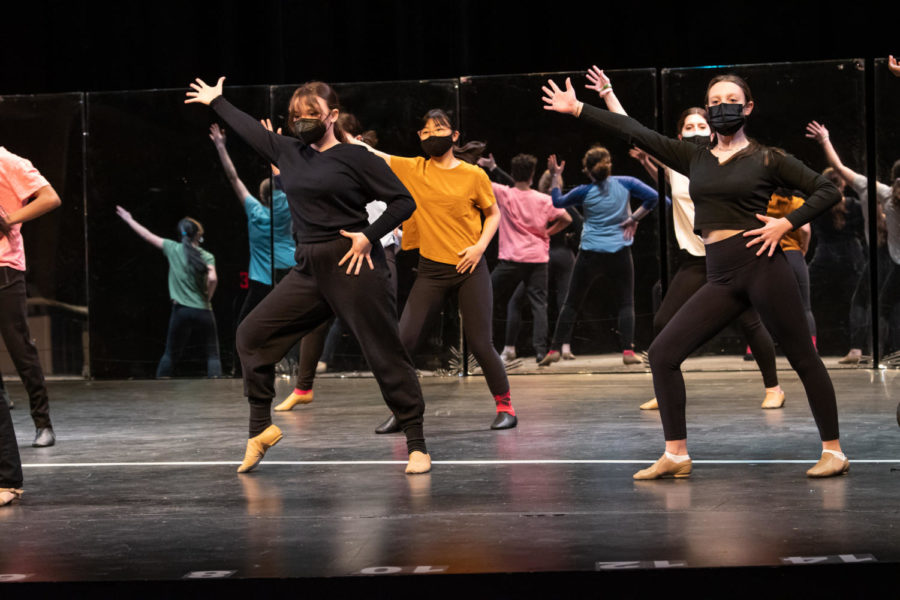 On Tuesday, the school hosted a student showcase assembly featuring a diverse array of performances including poetry, comical skits, and dances.

Hosts Adam Frommer (12) and Izzy Abbott (12) began the assembly by commemorating the one year anniversary of the school’s closure with personal reflections.

The scene took weeks of trial and error to perfect, but Piccirillo said they received necessary assistance from their classmates. “It really helped us that Joaquin Ramirez (11) was also in our class,” he said. Ramirez, who has lived in England, provided tips on how the actors could improve their accents, Piccirillo said.

“It’s been a while since there’s been any live theatre at HM, so this was a good opportunity to entertain people,” said Sonia Shuster (12). “The plot of the scene was really clever.”

Riva Vig (11) said she hoped the audience found her film “Obsession” — which featured minimal dialogue — entertaining and thought-provoking. “It was all worth it after working on it for months,” she said.

The assembly also featured a group film produced by Madison Xu (10), Ethan Waggoner (11), and Matteo Stewart (9), which featured a student rushing to class who leaves behind a notebook during his scramble.

The film was lighthearted, Xu said. “It’s action packed and pretty easy to understand without much dialogue or conversation,” she said. Xu hoped the short film showed that films do not have to be complicated to keep the audience entertained. “It was simple, quick, and active.”

The Community Council’s Diversity, Equity, and Inclusion worked with BLeX (Black Excellence Affinity Group) to create a Black History Month video for the assembly as well. The video was more of a celebration than a discussion of oppression, said Justin Burrell (11), who helped create the video.

“I am really happy that we were able to make a fun video that talks about the value of Black History Month by recognizing Black joy and culture,” he said. “Hopefully this video can also be the beginning of a heritage month video series, where each month a new video is made that corresponds to that month’s theme.”

Afterwards, Mekhala Mantravadi (11), who is the co-president of Poetry Out Loud, recited Dan Vera’s parody of an Emily Dickinson poetry reading called “Emily Dickinson at the Poetry Slam.” The poem perfectly matched the mood of the assembly: joy meets sorrow, Mantravadi said.

Mantravadi hoped the fantasticality of the poem helped distract the audience from the stress of their daily lives. “There is a mystical wonder to this poem and I really enjoyed that,” she said. “I really hope it brought a smile to people’s faces and they could feel the wonder and power of a poetry recitation.”

Liliana Greyf (11), the other co-president of Poetry Out Loud, also recited the poem “It was not Death, for I stood up” by Emily Dickinson.

Sinfonietta performed Sinfonietta No. 1 for Strings Movement 1: Sonata Allegro by Coleridge-Taylor Perkinson, and Orchestra teacher Nathan Hetherington conducted. Violinist Amelia Resnick (10) said she was happy her class’ hard work paid off. “It’s really nice that we were able to cap off our long hours of practice with a true performance,” Resnick said. “Especially with all the lights on stage, it felt like the theater was as full as usual.”

The assembly also featured two dances, one by the D period Dance Performance class and one by the cast of the production “A Chorus Line.”

While she hoped the opening number to “A Chorus Line” was entertaining, Julia Grant (11) also wanted the audience to see their performance as a symbol of community. “It is important to show how HM came together in this time and produced something so impressive with masks and social distancing,” she said.

The assembly showcased the strength of the school in overcoming the tragedies of the last year, Grant said. “In a time when we can’t be together with the entire school at an assembly, this was an important opportunity to show that our community we are still resilient and united.”