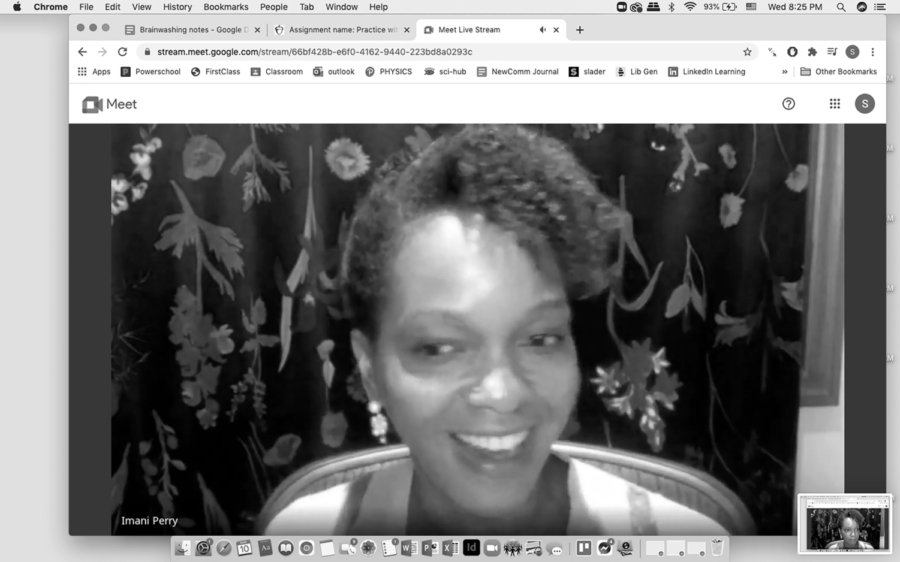 Guest speakers Professor Maylei Blackwell and Professor Imani Perry discussed the importance of incorporating Black, queer, and Indigenous histories into conversations about race and ethnicity in the seventh installment of the Upper Division (UD) speaker series: “How did we get here?: Connecting gender, sexuality, race, and ethnicity” on Wednesday night. Tuhin Ghosh (11), Liliana Greyf (11), and history teachers Dr. Alicia DeMaio and Melissa Morales moderated the event.

DeMaio said she invited Perry and Blackwell to address how gender and sexuality affect individual experiences with race and ethnicity. These overlapping layers of experience are referred to as “intersectionality,” and have historically resulted in experiences of oppression due to societal forces of racism, patriarchy, and homophobia, she said.

During the event, Blackwell stressed the inseparable nature of gender and sexuality within histories of race and ethnicity. “Race is lived through the modality of gender,” she said. “When we center gender and sexualty, we build a more inclusive freedom dream by complicating historical and modern struggles. We’re broadening our conversation to better understand how power works.”

Conventional histories often overlook intersectionality, causing the erasure of marginalized people, Perry said. “There are layered forms of domination that are about status, ability, race, sexuality, and more,” she said. “An individual can sit at many of these crossroads, and we are increasingly trying to recover stories of these people that keep in mind these various forms of domination.”

Learning about these histories through an intersectional lens helped Alexis Fry (12) realize that it is the only way to appreciate more full and true histories of marginalized people, she said. “The talk showed how telling history is also really important groundwork for activism, and how these histories can evolve and be reshaped based on the current of humanity.”

To broaden conventional Black, Indigenous, and queer histories, Perry argued to expand the conventional definition of heroes. “When we use stories of heroes we run the risk that the individual gets drawn out and seen as exceptional, when what we have to do is imagine ourselves in the position of the freedom fighters,” she said. An expanded definition of a hero also allows people to appreciate the “foot soldiers” laying the groundwork in addition to the leaders, Perry said.

The selection of particular heroes to fit a desired narrative resonated with Ariela Shuchman (10), as it reminded her of a common trend in her U.S. history class. “It made me think about the Harlem Renaissance jazz in the 1920s, where white people would just pick out parts of Black culture to enjoy without respecting Black people’s identity as a whole,” she said.

Both Perry and Blackwell expressed the importance of a transnationalist approach to Black, Indigenous, and queer histories. Blackwell said that transnationalism challenges United States exceptionalism. “We think that we created things like feminism, civil rights, and racial justice, so we only focus on what happens here when these struggles actually look different in different countries,” she said.

Additionally, studying these histories through a national lens erases indigenous people who are not acknowledged by national borders, Blackwell said.

This point resonated with Abigail Morse (12). “We define this land as American land, but if we’re going to start recognizing [Indigenous people] we need to recognize that they don’t think of this as America,” she said.

Ghosh appreciated Blackwell’s recognition that many movements persist in society today, especially in light of the Black Lives Matter (BLM) protests over the summer, he said. “Instead of using these days to acknowledge existing solutions, we should instead spend time looking into these issues today and recognizing their severity.”

The speakers ended the event by underscoring the significance of searching in nontraditional spaces to uncover marginalized histories. “Archives inherently tell us who we should remember and who we should honor,” Perry said. As a result, Perry often turns to out-of-print newspapers or elders to hear the forgotten histories that contemporaries deemed unworthy of being remembered through archives, she said.

Reflecting on moderating the event, Ghosh said he valued how the dialogue centered around contemporary themes that were based in historical context. “I was also blown away by the depth of the conversation and how the professors could string together complicated ideas in a way that made a lot of sense,” he said. “I’m just glad I could be a part of it.”