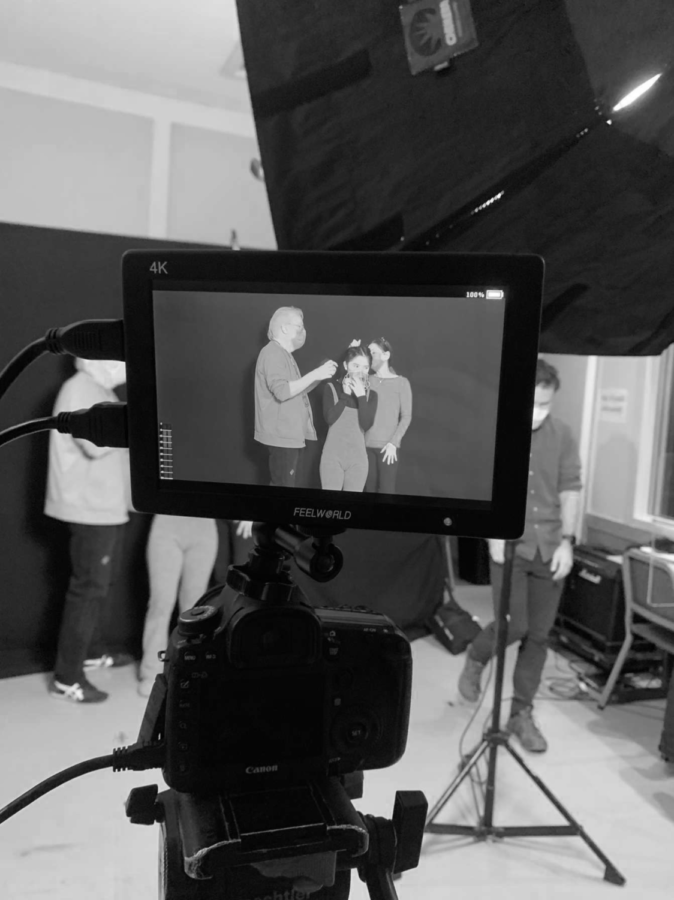 Dance teacher and the show’s director Denise DiRenzo and Theatre, Dance & Film Studies Department Chair Alison Kolinski have always wanted to produce A Chorus Line together before leaving the school — and this year, in the last production before they both retire, they’re developing a pre-recorded version.

Because of COVID-19 restrictions, performances will be pre-recorded, stage manager Sarah Sun (12) said. The recordings are organized into two categories — individual and full cast — which videographer Mike Flanagan will compile into one performance, Sun said. Videos of the full cast are taken in Gross Theatre, while everyone is masked, resembling the traditional show with in-person acting, Sun said.

After recording the audio, Music Teacher Douglas Epstein will send the final takes to Flanagan, who will sync the voices and music with the video before Epstein compresses and re-balances the audio one final time, he said. “This is how movies are made,” he said. “One shot at a time. Magic happens in post-production. It’s going to be a really interesting process as the team works its way through all the performances.”

Actors performed their individual recordings in the school’s recording studio, where they had the opportunity to sing without their masks on, Eden Plepler (12) said. Plepler, who plays Maggie Winslow, had to record four songs and one scene of dialogue last Saturday, all of which took two hours, she said.

One benefit of pre-recording Plepler’s part was that she could perform multiple takes of her songs, so she was able to feel confident with the final take, she said. “The studio added a new layer of excitement and professionalism that made the whole process exciting,” she said.

At the same time, it is difficult for actors to engage in dialogue with a recording of someone else, Sun said.

The individual recordings were set up like a small, socially distant soundproof room, Epstein said. The video camera, boom microphone, plain black background, and performers were in the main room while Epstein recorded audio and played music cues into the student’s earbuds from the control room, he said. Meanwhile, the videographer was in an isolated booth controlling the camera as DiRenzo fed lines and directions into the actor’s earbuds, Epstein said.

Mikayla Benson (12) was worried it would be challenging to get into character since there was no real thrill of an audience, she said. However, having five people there to help with the recording made the performance feel realistic.

The most enjoyable part of individual recordings was seeing actors have the opportunity to finally sing in person, Sun said.

Given COVID-19 protocols, students cannot sing together during rehearsals; instead, they either hum along to the music or do not sing at all, Oscar Shah (9) said. To practice singing together, the cast met over Zoom.

Cast members have had difficulties in managing the recordings, Sun said. “Individual recordings are difficult because the sheer number of them means each person never gets the time they truly deserve and weʼre always rushing to finish as much as we can during a session,” she said.

Because COVID-19 precautions were the main priority, earbuds used in the recording studio needed to be disinfected after each use, Epstein said. Moreover, while under other circumstances cues would be communicated through a head nod, this year, they needed to be conveyed through headphones, he said.

Still, Plepler thinks that the crew made the best of the circumstances and that Zoom rehearsals were as engaging and productive as possible, she said.

The whole process was unlike that of any other production that DiRenzo has been involved in, she said. “The process has been fascinating though, because I am forced to view the show through a completely different lens, literally and figuratively,” she said.

“I’m personally thrilled to see this come out because we’ve put in a lot of work trying to design a completely new format of theater, and hopefully it will feel a lot more refreshing than traditional Zoom productions,” Sun said.