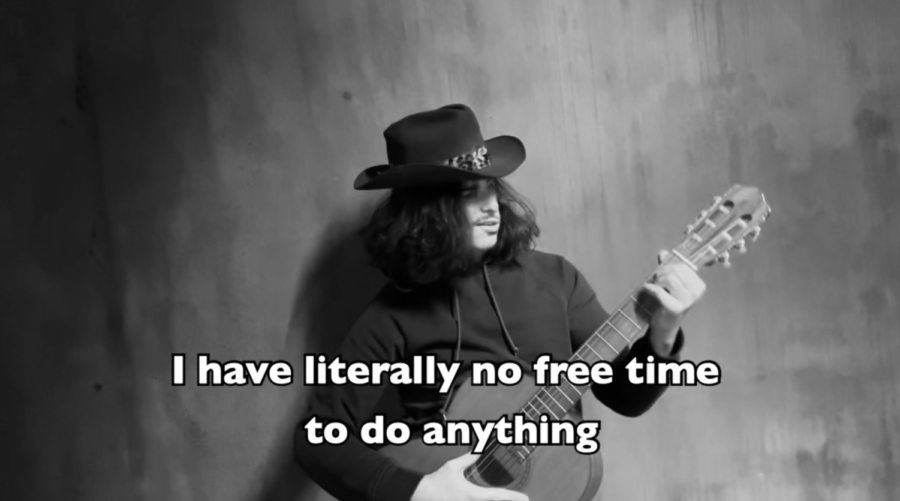 Combining complaints of homework, stress, love lives, and the pandemic with classic music theater songs, the Horace Mann Theater Company (HMTC) presented Complaints the Musical yesterday. The musical consists of 55 different complaints turned into monologues, song performances, and a final group choral performance of a rendition of the Broadway hit “Seasons of Love.”

Co-President of the HMTC Henry Owens (12) has been a fan of the complaints choir performances ever since he first saw them in elementary school, and he always thought it would be interesting to be a part of one, he said. “[The show] combines my love of complaints choirs, doing small theater events, and making parody music videos,” he said.

After receiving all the complaints, Owens began incorporating them into popular musical theater songs such as Tomorrow from Annie and Supercalafragalistic from Mary Poppins, while performer Jacob Shaw (11) wrote an original song using the complaints Owens sent him. After Owens and Shaw finished creating the song parodies, the HMTC sent out a sign up form to get other members involved, Owens said.

When working on the production, HMTC members could act, direct, or edit different sections of the performance, Dalia Pustilnik (11) said. Pustilnik directed the performance, and was paired with actors Athena Spencer (10) and Bailey Hecht (10). “We just kind of went through, one-on-one, their lyrics, the vision for what we thought the scenes would look like, what each line would look like, how they could film it at home alone.” Filming the scene was a quick process that consisted of Pustilnik calling the actors discussing what scenes they were able to create from home, she said.

In Complaints the Musical, one director and one actor collaborate on one scene, as opposed to a traditional show where a director gives instructions to an entire group, Hecht said. “The actor and director work as a team to come up with what they want to do for the scene, so there was a lot more control of how I wanted my scene to be performed.”

Administrative Assistant to the Grade Deans Ennis Smith had worked with Owens several times before Complaints the Musical, specifically on iterations of the Shakespeare Video Project. “This was a nice quid pro quo, [Owens] directing me instead of the opposite.”

Like Pustilnik, Abigail Morse (12) also directed a scene. “We were kind of pressed for time and so we filmed it during two break periods, and there was a lot of improvisation where we did it in one take,” she said. “It was just really hilarious to watch people walk by as I gave them some instructions.”

Willa Davis’s (10) favorite part of the musical production was watching other performers on the roof during the Fiddler on the Roof section that took place on top of the Lutnick Hall roof, she said.

Pustilnik’s favorite complaint was about liking someone who doesn’t have the same feelings, she said. “That obviously has nothing to do with school, but they were definitely all relatable,” she said. “Like in the spirit of the original complaints choir, it’s just supposed to be a fun way to make grievances that everyone experiences fun.”

Work-related complaints included that “Classroom is way worse than Haiku,” “All of my clubs meet at the same time,” “I hate firstclass,” “This paper is due tomorrow and I have been awake for 30 hours,” and “Teachers tell you to take time for your mental health and then assign three hours of reading.”

Other complaints included that “My crush friend zoned me,” “All my friends live five hours away,” and “Middle schoolers are too loud in the morning on my school bus.”

Davis enjoyed the new format of the Complaints Choir as a musical because it gave individuals an opportunity to showcase their talents and have their own parts rather than just the group song, she said.

Being a part of the production was some of the most fun Smith has had all year, he said. “Between juggling my duties as both film studies instructor and administrative assistant this year, working on Complaints was a welcome break.”