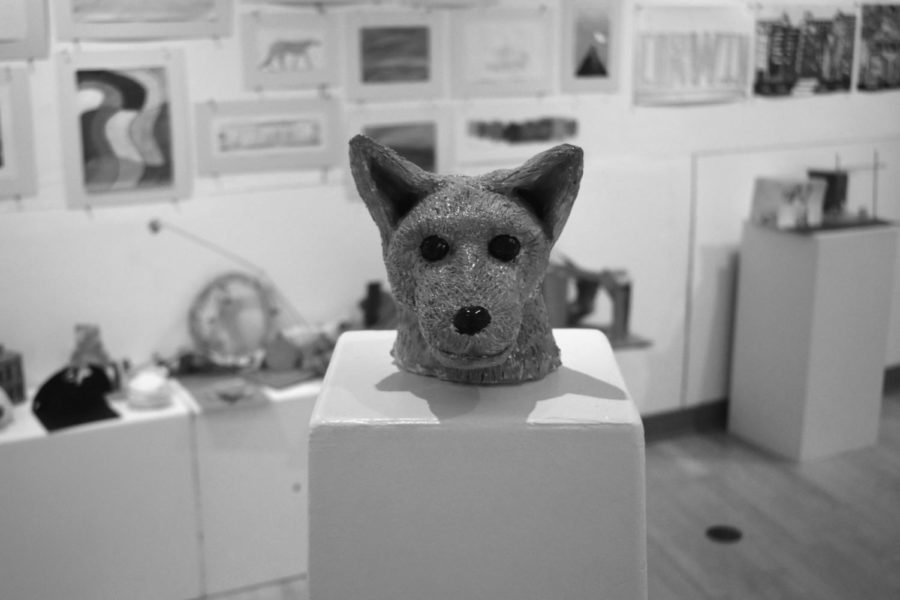 Upon entering the Fisher Hall gallery, a viewer observes vibrant paintings and drawings of city and desert skylines at dusk lining the left wall. As a viewer gazes around, film reels showcasing silhouettes of pens, glasses, leaves, and hands catch their eye. In the center of the room sit unglazed ceramic sculptures of animal heads on leveled white stands throughout the room.

“[Leaves] are very physical, they’re very simple, they’re tiny, they’re not imposing, but they’re kind of pretty to look at and have a nice kind of rhythm to them,” Logan said.

Although the collages were originally displayed around the studio, Logan thought relocating a few of them to Pforzheimer would encourage people to visit the gallery in Fisher Hall, he said.

Timothy Lipsey (6) contributed marbleized canvases and a sketch of a yacht sailing through the horizon to the show. To make the marbleized canvases, he mixed three different colors of paint together and let the paint drip across three square canvases.

Of the two pieces he contributed to the gallery, Lipsey was most proud of the marbleized canvases, he said. “I think it is sort of nice to have that piece of work in there,” he said. “It is not like I’m proud, but it is a nice feeling,” he said.

Isabella Bartoletti’s (6) class focused on making sculptures of their spirit animals. The piece Bartoletti contributed to the show was a sculpture of a dog whose head could open in order to store small items inside, she said.

“This sculpture was inspired by my mini Goldendoodle, who recently caught a disease that gave her difficulties to walk,” she said. “Though she isn’t my spirit animal, I wanted to have a piece of artwork that reminded me of her.”

Tea Lazri (6), who also had to make a sculpture of her spirit animal, made a storage container created in the shape of a silver fox’s head, she said. “I was inspired by the fluffiness of the fox, and also the color of its eyes, which I had a hard time representing while painting it,” she said.

Studio manager Lombardo said that she arranged the pieces in the gallery and that she was involved in planning out the gallery. Teachers pulled out their students’ work from the first and second trimesters to be displayed, she said.

A website created last March for the purpose of continuing to showcase students’ artwork during the pandemic also features photos of the art show.  “We wanted to show students who were remote what the gallery generally looks like,” Lombardo said.

Remote students were able to contribute to the gallery, Logan said. Because the process of adding a matte finish to the images takes time, some of the work will have to be displayed around the studios after the gallery has ended, Logan said.

While transitioning to online school meant that many ceramics students couldn’t glaze or paint their work, the unglazed sculptures ended up adding a sense of uniformity to the gallery, Lombardo said. “They are all just raw fireclay, which I think is actually a really nice look,” she said. “It’s a result of how we change things for the pandemic.”

Lipsey said that online school, in general, made it difficult to make artwork. “The vibe of the classroom [was] just never there during online [school], so it is a totally different experience,” he said.

Overall, the transition to online instruction for a part of the year made this year’s art gallery especially meaningful, Logan said. “We’ve told all of our students that we’re all going through a historic time, and even if we just matte a photograph of what you sent, that’s great,” he said. “We all know we’re going through the pandemic, but life has to go on, and we have to show that we’re going to move ahead creatively and positively.”

Bartoletti said that she was thrilled to have her art displayed in the art show because of how hard she worked on the sculpture. “Even though it wasn’t finished, I hope people still enjoyed looking at the almost finished product,” she said.

The gallery is also important for showing students that artwork is valuable and should be treated with respect, Lombardo said. “Visual art is meant to be seen,” Lombardo said. “If you feel comfortable putting it on the wall and letting people see it, that’s the best way to let the work shine.”