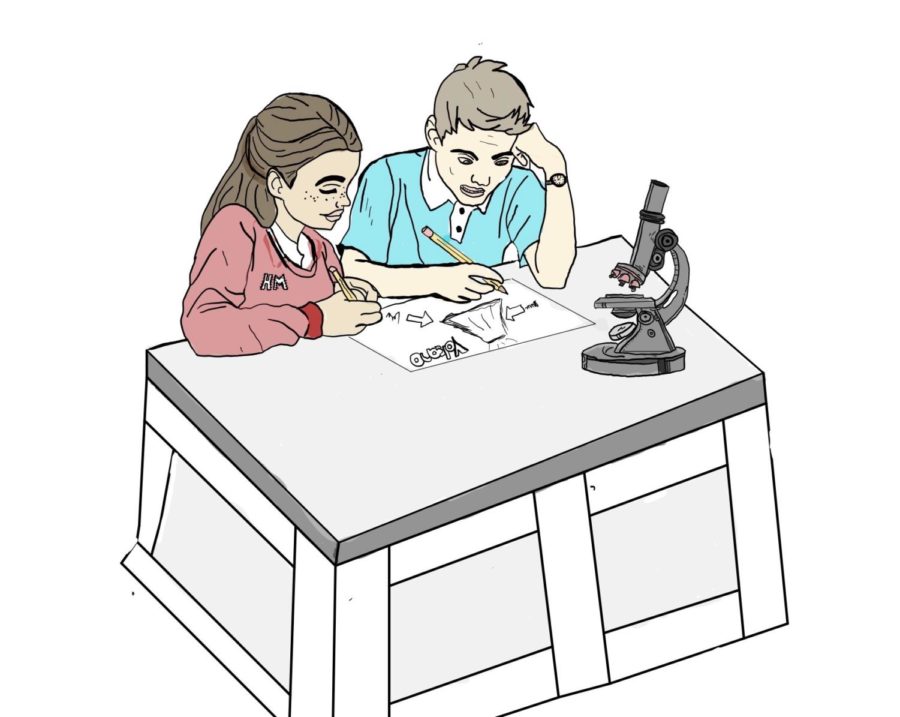 15 members of the school’s Science Olympiad team competed in the Science Olympiad State Tournament against more than 40 other teams on Saturday, April 10. Although scoring has not yet been finalized, the team performed well, faculty adviser Oleg Zvezdin said.

The team finished in the top four in the regional competition at the beginning of Spring break, which allowed them to proceed to States.

There are two teams within the larger group: the A and B team. The majority of the A-team competed in the State Tournament, but the teams were repeatedly altered prior to the tournament to ensure that the most skilled students were taken, club co-leader Gabby Fischberg (12) said.

The team has qualified for States multiple times in the past, Fischberg said. “It was great to qualify again this year, because States last year was unfortunately cancelled,” co-leader Catherine Mignone (11) said.

Usually, a Science Olympiad tournament includes build events, test events, and lab events, Zvezdin said. However, this year, the tournament converted the lab and build events into test questions that are completed in pairs. This helped the team since they usually excel in the testing events, Mignone said.

The top two teams from the State Tournament will move forward to nationals, Mignone said. The National competition takes place on the weekend of May 21st.

Unlike last year, the team began in a group Zoom, while partner teams were put into specific breakout rooms according to their events. They retrieved their tests and corresponding answer sheets through a Dropbox link, and they proceeded to complete their events throughout the day.

The team receives the event list at the beginning of the year, and one topic that made numerous appearances at tournaments was Ornithology or the study of birds, Fischberg said. “Ornithology has been a staple over the last couple of years,” Zvezdin said. The team, especially Mignone, excelled in this particular event this year, Fischberg said.

In the regional competition, the team received first place awards in the Disease Detectives (focuses on diseases and how they are spread), fossils, and ornithology events, Mignone said. The team received second place in the Machines and Dynamic Planets events, and third place in the Chemistry Lab and Water Quality events. The team scored top three in over half of the events they participated in, securing their States’ qualification, Mignone said.

In the States tournament, Steve Yang (10) competed in Water Quality, Dynamic Planning, and Geologic Mapping events. “I was a little surprised by how many more questions there were, especially in comparison to the Regional tournament,” Yang said. “Perhaps being more prepared mentally on that front would’ve helped.”

To decide who competes in what events, there is a tryout period at the beginning of the year, Mignone said. After being placed on either the A or B team, the team members fill out a form to indicate three events they want to compete in.  From there, the presidents make the roster based on past scores and the recent test results, she said.

The team needs to increase their studying to cover the large range of material on the States tests, Mignone said. With Zvezdin’s help, the students have learned what they needed to study, as well as how to create effective study guides. “Part of the studying is to put together a booklet or table which you can then reference in the competition,” Zvezdin said. The upperclassmen also guided the team through the studying process, Fischberg said.

Although there are team meetings to oversee everyone’s progress, Science Olympiad is really up to the partner teams, Mignone said. “It’s impossible to do as one person because the tests are so detailed and specific, so you have to be on track with your partner to prepare for them,” Mignone said.

“It was really awesome to make it all the way to states,” she said. “Everybody worked super hard and did really well.”