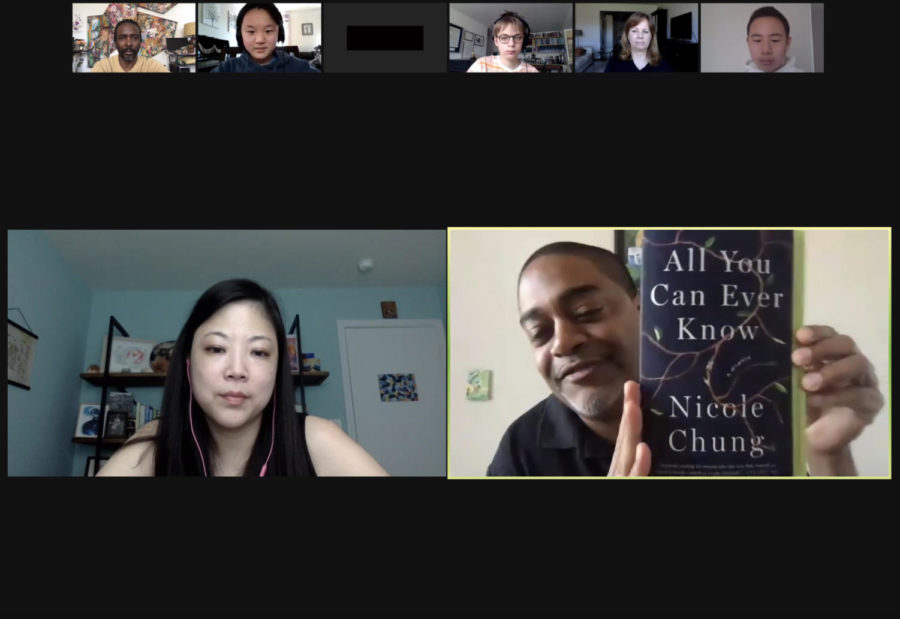 At last week’s Middle Division (MD) assembly, writer Nicole Chung shared her experiences with anti-Asian racism and discussed the struggles of not fitting in. Chung, whose biological family originated from Korea, was adopted by white parents, an identity that became a key theme in her 2018 book “All You Can Ever Know: A Memoir.” At the assembly, Chung shared personal stories as examples of how to react in the face of racial prejudice.

“I always want students to feel like it is a powerful thing to write or to read a story,” Chung said. “I love that moment when you put something out into the world and people engage with it, and you’re not alone. You’ve shared an experience, and people are relating to it and talking about it, and it maybe shifts some of their thinking on subjects.”

Visual Arts Department Chair Dr. Anna Hetherington is a long time friend of Chung, she said. Hetherington suggested Chung speak with the MD because of her kind, graceful, and empathetic nature. Some MD students would be able to relate their own experiences to those of Chung, even if their lives were very different, Hetherington said.

Chung pointed out that her experiences as an Asian-American differ from the experiences of other Asian-Amerians and that one person cannot speak for all others, she said. Chung’s words reminded Hetherington that when talking about broad groups, it is important to remember individuals and their personal struggles, she said. “When people say anti-Asian racism or anti-Asian violence, it feels monolithic, and it’s not,” Hetherington said.

During the assembly, Chung discussed her childhood as a cross-cultural adoptee raised in Oregon, Hetherington said. Besides reading excerpts from her book and discussing anti-Asian racism, Chung also spoke about the craft of writing and the individual paths writers take. Hetherington found it powerful that Chung told students to write about their joys in addition to their trauma, she said.

Especially in a moment of heightened anti-Asian racism, Chung’s stories served as an example of how acts of racism can pervade someone’s life, Sarina Shah (7) said. “The most surprising thing from the assembly was the prejudice she felt not only from her neighbors growing up, but also the prejudice she felt from her friends,” she said. “It was hard to hear how alone she felt because nobody looked like her.”

Specifically, Shah was shocked by Chung’s anecdote about getting into a fight with a peer on the playground who pinched his eyes together to mock her race. “It’s really hard to come to terms with the fact that a boy so young could act on the biases and prejudices he had inside of him.”

While upsetting, these stories served as a wake-up call, Shah said. “I learned that in order to stop these biases against certain Asian Americans, the best thing to do is speak up for yourself,” she said. “The worst thing that you can do is just be a bystander to the person who is experiencing these discriminatory policies.”

Chung’s message on how to combat instances of racism was informative and clear to Angel Zhao (6), she said. “Students can join rallies or affinity groups to raise awareness and find community,” she said. “The bottom line is simple: if you see something, say something.”

Students can start with small actions such as standing up for others, speaking out, and getting help when needed, Chung said. She also suggested that students reflect on themselves as they develop their individual personalities — specifically, the values they demonstrate, how they can be in solidarity with others, and the impact of the work they can do to make a difference in their communities, she said.