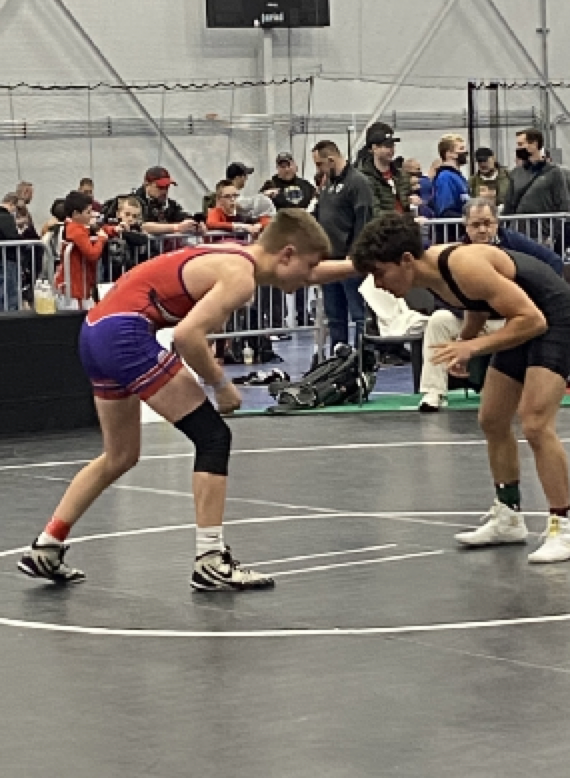 Over Spring Break, Elias Romero (11) and James Thomas (11) participated in the Journeymen/Rudis New York State Wrestling Championships (NYSWC) in Manheim, Pennsylvania. Romero and Thomas both appeared in the championship round of 16, but, as they lost their matches, they did not advance. It was the first wrestling match Romero competed in this year and the second Thomas competed in, Thomas said.

Neither Thomas nor Romero won their round-robin tournament; Romero went 0-4 and Thomas went 1-3. However, because of an availability of spots in their respective weight classes and their statistics from previous seasons, they were allowed to compete, Romero said.

As Romero was unable to wrestle in preparation for the tournament due to COVID-19, he practiced by shadow wrestling and doing various types of cardio, he said. Shadow wrestling consists of practicing normal wrestling motions alone as if the opponent were there.

“Our HM team would work on our stance and practice our attacks either in the park or even in our own homes, sometimes,” Romero said. Romero found being unable to practice with a partner until he arrived at the tournament difficult, he said.

Similarly, Thomas kept a wrestling mat in his basement to practice his stance, motion and drilling, and he did cardio and strength training on his own. However, a week before the statewide tournament, he attended a tournament in Pennsylvania at which he placed third. The tournament allowed him to fall back into the rhythm of wrestling against real opponents, he said.

Going into the championships, Romero and Thomas expected to perform poorly, Romero said. “While we had high expectations, we also understood that we probably wouldn’t do as well as we hoped, since we hadn’t fully wrestled since last February.”

“Most of the guys we were competing against were coming off of full seasons just weeks before, and they were refreshed, so we were at a disadvantage,” Thomas said.

Coach Peter Doyle, who attended the championships with Romero and Thomas, was pleased with their performance, he said. “They performed above expectations given they had not wrestled in a match for over a year, and they continued to do better as the day wore on.”

Thomas enjoyed seeing some of the top-ranked athletes in the country compete, he said.

Most wrestlers who competed in the championships were sectional champions, so the athletes were the best wrestlers from New York, Doyle said.

One notable competitor, Stevo Poulin, who committed to NC State to continue his wrestling career, is a four-time New York state champion and world team member, Romero said. “I remember him making quick work of his opponent by technical superiority –– like a mercy rule –– and most of the tournament was crowded around that mat to watch him wrestle.”

Romero was concerned by the number of adults and wrestlers not wearing masks or obeying COVID-19 protocols, especially because the tournament was so crowded. All attendees were screened for temperature and symptoms, and wrestlers and participants were required to wear a mask up until their matches. Still, many spectators and wrestlers did not obey these rules; some were wearing masks incorrectly and others did not wear them at all, Romero said.

However, he was thrilled to be able to compete alongside Thomas, be coached by Doyle, and experience what he missed during the school’s wrestling season, he said. “Our goal was just to enjoy being back on the mat, and we accomplished that,” Romero said.