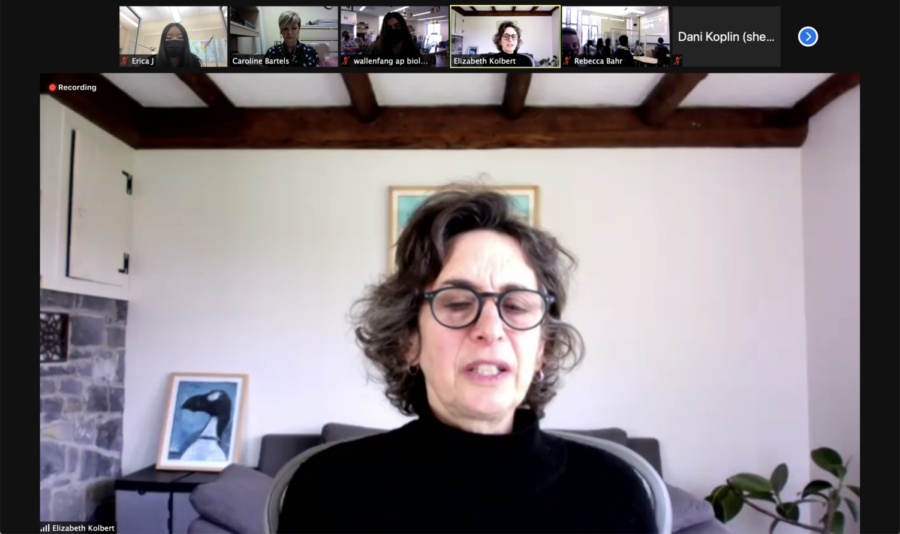 Addressing climate change “will require some major thinking and we must work hard to fix our problems,” Kolbert said. People must cut carbon emission and stop climate change before it worsens, she said.

“The Sixth Extinction” won the Pulitzer Prize and was labeled one of The New York Times “10 Best Books of 2014.” Kolbert is also a staff writer for The New Yorker and has written seven other books, most of which address the science and politics of the environmental crisis facing our planet today.

Kolbert discussed her experience of traveling with other scientists to The Great Barrier Reef in Australia, an experience that opened her eyes to the tremendous destruction of the environment within only a few generations. Kolbert also discussed the importance of learning through active engagement with the environment, as it helps students understand their role in protecting those spaces.

Bales agreed that learning about the environment first-hand in places like the John Dorr Laboratory can be beneficial to students, she said. When combined with classroom learning, it provides students with a deeper understanding of the environment and climate change, Bales said.

Most of the ideas Kolbert raised during the assembly were also closely connected to what students are learning in the GEH course, Ganea said.

Another  theme that Kolbert discussed was the idea of timescales — or rates of change — and how quickly humans can affect the environment, Ganea said. “Humanity has been imposing a human timescale — years, decades — onto the geologic processes of nature, which means that nature simply can’t catch up with the burdens we are placing on it.”

Another course theme Kolbert highlighted in her conversation was how catastrophic extinction events can stop the slow processes of evolution and natural selection, Neuwirth said.

During the D period talkback, students asked Kolbert questions about her work at The New Yorker, the process of writing her books, and her expertise on other environmental issues currently affecting the world.

Kolbert also discussed technological innovation and the possibility of humans going to or living in deep space rather than solving environmental problems on Earth.

In light of Kolbert’s insight, Ganea said people need to utilize their available resources when dealing with the climate crisis. “Kolbert argued that while going to space might seem great on paper, we cannot expect technological innovations in the future to serve as our ‘get-out-of-jail’ free card.”

The book is relevant to the school’s community because the consequences of human interference with the environment is a problem that current generations of students will have to face, Bartels said. “The decisions we make about how we interact with the environment will directly determine the rapidity of this next big extinction.”

Nitika Subramanian (10) especially enjoyed Kolbert’s thoughts on the Green New Deal. Kolbert said that while it is a great idea and political statement, it would not necessarily end climate change entirely, she said. “It’s great to talk about how climate policy would have a tangible effect on our lives.”

At the end of the assembly, Kolbert urged students to take action to stop climate change. “[Climate change] problems are as big as planet earth and they’re only getting bigger,” she said.

Ganea hopes students leave the assembly more conscious about the environment, and inspired to do their best to combat climate change, Ganea said. “We cannot stand on the sidelines of such an impending crisis,” he said. “We must take swift, yet well thought-out action, and it’s time we put our brains to the task.”