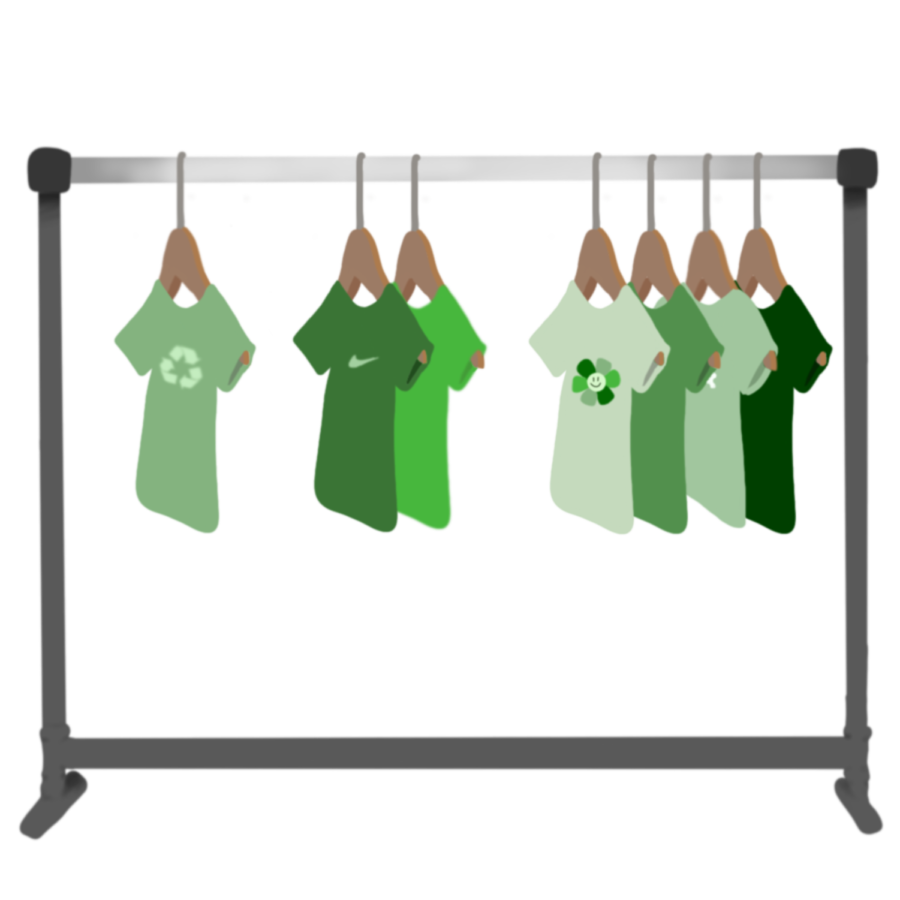 “One man’s trash is another man’s treasure,” Aidan McAndrew (12) said in reference to his experience with thrifting. McAndrew is one of many teens who began thrifting because of its environmental benefits and fashion opportunities.This practice has grown increasingly popular in recent years among teens in upper income households, with 46% of surveyed upper income teens having bought clothing secondhand, according to “Business Insider.”

It is a combination of desire to keep with the latest fashion trends and environmentalism that incentivize thrifting, Willa Davis (10) said. “Our generation has a stronger sense of environmentalism, so from that standpoint, people want to thrift because they actually want to help the world.”

The main reason Felix Brener (11) thrifts is because of the positive environmental impact the practice has, he said. “By extending the lifespan of a garment, you can prevent new garments from being bought and produced.”

The fast fashion industry is one of the largest producers of clothing in the world. Shopping at thrift stores can help people refrain from buying fast fashion, Nikita Subramanian (10), who led a Green Week workshop on the dangers of fast fashion, said. In recent years, fast fashion, clothing produced cheaply and rapidly to maximize on current trends, has become detrimental to the environment, she said.

Because of fast fashion, consumers bought 60% more clothes in 2014 than in 2000, but they kept that clothing for half as long, according to the World Resources Institute. With an expected 400% increase in the world GDP by 2050, the demand for fast fashion is only expected to go up, the article said.

Subramanian tries to avoid buying low quality fast fashion clothing, she said. “So you’re in this lose-lose situation, because you don’t want to throw away the garment because you want to be good for the environment and not create textile waste, but the more you wash the garment, and the older it gets, the more microfibers are released into the ocean.”

GreenHM Co-president Arya Patel (12) said fast fashion is terrible for the environment and the world in general. “It uses a lot of child labor, especially in Asian countries like India and China.”

Davis said that fast fashion companies prioritize profit over the well-being of their workers, which is why thrifting provides an amazing alternative. “When you’re buying something secondhand, you’re giving a piece of clothing a new life, because otherwise it would have just been discarded.”

Thrift flipping, also known as upcycling, is a practice where people will repurpose thrifted items to create new items, Tomoko Hida (11) said. Hida thrift flips to make clothes that better suits her and is influenced by the latest trends in fashion, she said. “Particular fabrics are hard to find so it’s nice when I hit the jackpot at a thrift store.”

The more people thrift, the more encouraged they are to continue learning about sustainable shopping and how to protect the environment with their clothing choices, Hida said. “They are more likely to find new brands that engage in more sustainable practices.”

Many brands recycle clothing scraps in order to make their original fabrics, Hida said. Some brands gather and reduce scraps of clothing to their basic synthetic fibers in order to create their patented fabric. “There are hundreds of industrial plants processing this recycled fabric that is then distributed to brands interested in sustainable collections,” she said.

When McAndrew first tried thrifting, he realized that he could find clothing items he would not normally see had he gone to a typical clothing store in the city, he said. Thrifting opened his eyes to the fact that there were other viable options for clothes shopping and finding things that he liked apart from common brands, especially at a time when he was still discovering his style, he said.

“I could buy something similar, [that is] new for a lot more, but I’m going to choose this because it’s a little more unique, it has a little more flavor to it,” McAndrew said. “[The clothing] comes from somewhere, from a different time, or it has more pizzazz than something that I could just look up online and buy.”

Social media can give you the impression that you will find something amazing whenever you thrift, but it is important to not go into a thrift shop expecting to find the most incredible pieces all of time, McAndrew said. Sometimes McAndrew goes into a thrift store and finds nothing that speaks to him. “You go in, you buy what really speaks to you, and you leave. You have to have that gut feeling,” he said.

The first time that Ariana Borut (10) thrifted was while she and her family were living in Japan, she said. She had an account on Poshmark, a virtual marketplace where users can buy and sell new or secondhand goods. Borut later branched out to other similar platforms, she said.

Borut enjoys thrifting because she likes finding a good piece of clothing while also getting more for her money, she said. She takes special considerations when thrifting, such as not buying products that are being resold from fast fashion companies. If she wanted to just buy fast fashion she could, but she goes to thrift stores to find something unique, she said.

Thrifting has also given Borut an opportunity to branch out with her fashion choices. “Thrifting exposes you to so many different brands and types of clothing that you may not have been introduced to before,” she said.

To find the best thrift stores, Loren Pretsfelder (10) researches online and looks on TikTok for popular stores, she said.

Thrifting has also been a great opportunity for Gabrielle Fischberg (12) to get more into fashion during high school, as it is low stakes economically, she said.

While some people overbuy while thrifting due to the cheap prices, Brener is very conscious about his purchases. If there is a piece of clothing that he is interested in, Brener will think about it for a few months before going out and buying it so that he does not regret his purchase, he said.

Thrift stores, like other retailers, will occasionally raise their prices with higher demand for items, Brener said. With the rising popularity of thrifting, increasing prices can be detrimental to people who rely on thrift stores for all of their clothing, he said. “That doesn’t mean that thrifting is worse than fast fashion, it’s just something to be a little mindful of when you do thrift.”

“Sometimes, thrifting is people’s only option for clothing, and so with the influx of people coming to thrift stores, it’s made it harder for those people who rely on only thrift stores as their main source of clothing,” Patel said.

Lian Aydemir (11) tries to only purchase non-necessity items, to ensure that people who rely on thrift stores as their primary clothing source have access to what they need, she said. “I make sure not to buy cheap necessity items like heavy winter puffer coats because there’s a lot of lower-income people who actually need it more than I do,” she said. “When picking something out, I always pick it out based on how versatile it is, how much use I can get out of it, and if it’s a really unique piece.”

Fischberg tries to avoid buying items such as shoes because they can be hard to find in good condition, and there are people who need them more than she does, they said. However, she does not worry about buying other items. “[Thrift stores] have so much backstock, and a lot of clothes from thrift stores get dumped anyway, so you might as well purchase [the clothing], instead of it getting sentimental.”

One of the problems with thrifting is the resale for a higher price in order for resellers to make a profit, Hida said. “It prevents this whole group of people from being able to access conventionally “nicer” clothing, and the more [common it becomes], thrifting is no longer going to be an option for sustainable clothing because people aren’t going to thrift because it’ll be so expensive.”