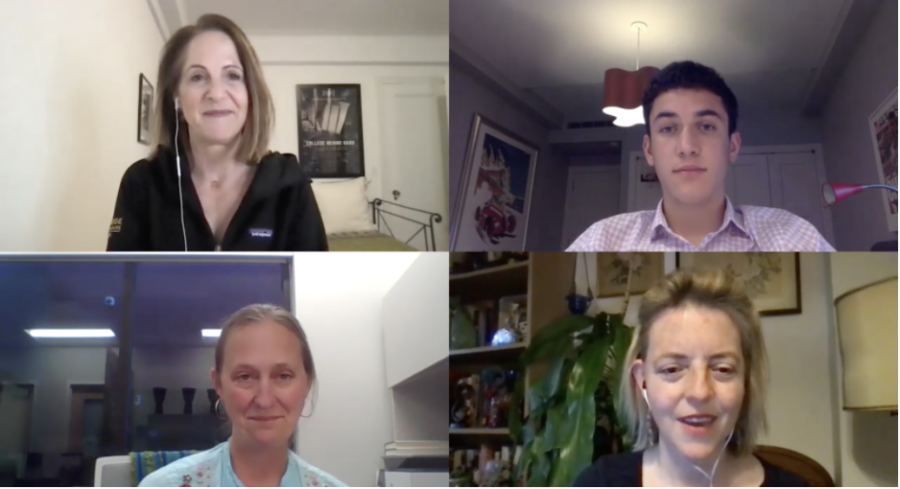 Simon Schackner (11) won this year’s Alexander Capelluto Award for his work creating a joint English elective between the school’s seniors and women in Southern Maine’s Women’s Reentry Center. His project, which he has worked on for over a year, will soon become a reality.

Last fall, director Lynn Novick ’79 spoke about her film “College Behind Bars” at an assembly. Schackner was amazed by the imprisoned students’ interest in education, he said. He realized that he and his peers often take their educational opportunities for granted.

After the assembly, Schackner informed his mother about the assembly and his interest in providing education for people in prison. When he learned about the Capelluto Grant, he realized it was an opportunity to develop his idea, he said.

However, the grant was suspended in 2020 due to the pandemic. When Schackner applied for the grant last year, he proposed the idea of holding joint classes over Skype with the school’s community and an incarcerated community. “In an initial interview with the Capellutos in March of 2020, they were rightfully skeptical of the prospects of online learning at the time because it had never really been done before at Horace Mann,” he said. “Ironically, COVID proved to help my grant proposal because it showed that online learning could actually happen.”

“Simon is opening a new window of possibilities for HM,” Karen and Jacques Capelluto of the Alexander Capelluto Foundation wrote in an email.

While looking for an incarcerated community to partner with, Schackner sought help from Head of Upper Division Dr. Jessica Levenstein, who suggested English teacher Rebecca Bahr as a potential teacher for the class.

While creating the class, Schackner met with state senator Alessandra Biaggi and Dr. Hilary Binda, the Founding Director of the Tufts University Prison Initiative at Tisch College, both of whom were an inspiration for his entire project. Binda teaches a class called The Literature of Confinement to university students and students from a Massachusetts men’s medium-security prison. Schackner emailed Binda after his mother, who attended Tufts University, told him about the class.

Schackner then reached out to Novick, who referred him to one of her colleagues, Priscilla Burnes-Thompson, who works for a media and film literacy firm and has been working on College Behind Bars projects. Burnes-Thompson suggested that Schackner collaborate with the Southern Maine Women’s Reentry Center (SMWRC), an incarcerated community in Maine that was enthusiastic about taking on a joint class. The class will be offered as a Senior English Elective next fall, Schackner said.

“Simon is quietly determined, thorough, thoughtful, and passionate about his goals,” Levenstein said. “His project represents the best of HM.”

Schackner will meet with the Capellutos next week to discuss how much money he will receive in order to  purchase books for the incarcerated students enrolled in the class. Any leftover money will go towards a trip to Southern Maine’s Women’s Reentry Center so that the school’s class can meet the students in person.

Levenstein contacted Bahr after Schackner proposed the project to set up a potential meeting. “My first thoughts were, ‘How wonderful!’” Bahr said. “I am so impressed with Simon; he is so thoughtful, clear, warmly intelligent, and compassionate. He has had the vision and determination to make something extraordinary happen.”

After meeting with Novick in December, Bahr and Abbie Embry-Turner, who works in the Southern Maine Women’s Re-entry Program, discussed ideas for the class and came up with a curriculum. “Eventually, my co-teacher and I decided a class on the American identity would be of great interest to the women and our HM students,” Bahr said.

Burnes-Thompson has been working with Schackner, Bahr, and Turner and helped connect them to the Maine Department of Corrections. “[Simon] is determined to use his voice and educational privilege to bring change to the world,” Burnes-Thompson said. “He has attended many of our other events at colleges or non-profits so that he really understands the issues presented in the film.”

Schackner believes the class will be an eye-opening experience. He looks forward to hearing new perspectives in the classroom, as an English class based on reading and discussing literary works is fascinating when done with different types of people, he said.

“He is a pretty remarkable young man who gives me hope that this generation will do a lot of good in bringing social change to the world,” Thompson said.

Tae Kyu Lee (11), a co-recipient of the Alexander Capelluto Award, designed a project to help low-income students study for the ACT and SAT in an effort to bridge the gap between wealth and standardized test scores.

After learning about how income disparities greatly affect students’ standardized test scores, Lee was inspired to do his part in helping underprivileged students. Even though many colleges are going test-optional, students still want to take these tests, including Lee himself, he said. “When the [grant] application opened up, it gave me a good opportunity to sit down and really develop the idea.”

The Capelluto foundation members gave Lee tips on making the project more feasible and maximizing its efficiency. “Under the guidance of the foundation, I was able to refine and polish my plan by the final written application deadline,” Lee said.

Without the funding from the grant, Lee would not have been able to pursue this project, he said. Lee first completed a written application and interview, during which representatives from the Alexander Capelluto Foundation learned about his project and suggested refinements. After submitting a final proposal, he was invited for a second interview.

Lee’s advisor, English teacher Dr. Deborah Kassel, said she was moved by Lee’s efforts. “Tae Kyu impressed me from day one in English 9 with his keen intellect, uncanny industriousness, and innovative, upbeat spirit,” she said. “Tae Kyu invests his talents in the improvement of the lives of others.”

Lee plans to use the grant money to purchase test prep materials for students. The students will receive free standardized testing lessons for both exams, which will be taught over Zoom by volunteer high school students. The tutors will not all be from the school — Lee works on an out-of-school project called Pass the Torch in which he gives lessons to younger students. Through this program, he contacted numerous volunteer tutors who will help him in the ACT and SAT test prep project.

Lee will find tutees through community outreach initiatives, partnering with community centers, libraries, and other schools to make students aware of his program. The other tutors Lee is working with will also help to spread the word, he said.

Due to the pandemic, Lee will conduct lessons over Zoom to help many students who do not have access to college prep classes in preparing for standardized tests, Karen Capelluto and Jacques Capelluto of the Alexander Capelluto Foundation wrote in an email.

Lee looks forward to commencing the first round of lessons this summer. He hopes they will begin by July, in order to prepare students for the 2022 winter standardized tests.

“Tae Kyu is a wonderful young man of many talents who embodies the values of the true scholar: academic excellence, integrity, and service,” Kassel said.