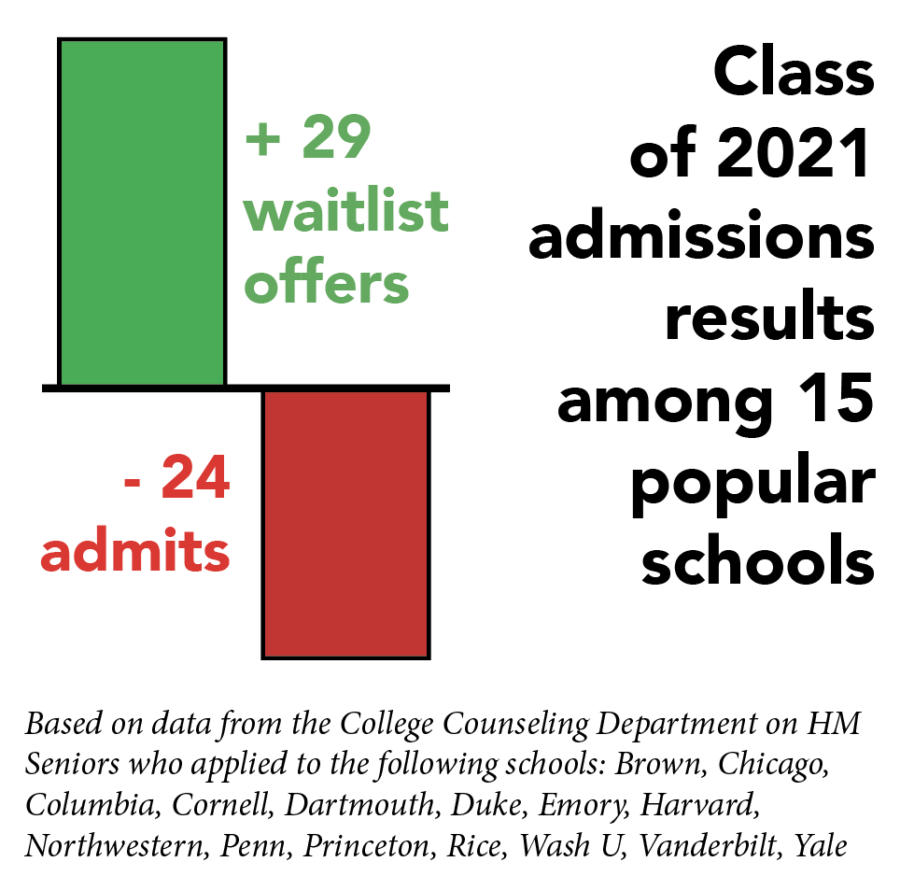 “There are students who feel like ‘Gosh, I worked hard. I spent those late, late nights studying. I did not go out with my friends every Friday. I sacrificed so much, and I’m still not going to the college I wanted to,’” Head of College Counseling Canh Oxelson said.

This year, many students had fewer acceptances and thus limited options as a result of test-optional policies and the increase in applications at many selective colleges. More students were also placed on waitlists than in previous years, and significantly fewer students were admitted from the waitlist compared to years prior. The reduction in overall acceptances was the same for almost every independent school, as well as many other high schools, Oxelson said.

“There was a lot of disappointment and bitterness in my grade. Regardless of how much you prepare yourself for your results, getting a rejection will always be painful.”

While regular decision acceptances decreased, early decision (ED) outcomes remained the same as previous years —  approximately 30% of students in the grade were admitted into college through early decision.

The final data for the Class of 2021 may not demonstrate fewer students attending reach schools but rather students having fewer options, Oxelson said. “Having to go to a particular college because it’s the only place you got in, that doesn’t feel very good,” he said. “We’d rather have students own the decision, instead of having the decision made for you.”

Selective colleges saw an overwhelming increase in the number of applicants. According to the Wall Street Journal, Colgate had an 103% increase in applications this year, Columbia had a 51% increase, and Harvard had a 42% increase. The sharp increase this year is likely due to both test-optional policies and to the fact that colleges were recruiting virtually this year, which allowed for greater access to informational programs, Oxelson said. The increase in applications caused a sharp decrease in acceptance rates.

Alex Oh (12) was rejected from his ED school and was later accepted into only four of the 17 schools he applied to through regular decision, he said. Although Oh is pleased with the college to which he has committed, receiving so many rejections was disheartening, he said.

Mikayla Benson (12) said many seniors were surprised about their outcomes and their friends’ outcomes this year. “There was a lot of disappointment and bitterness in my grade,” she said. “Regardless of how much you prepare yourself for your results, getting a rejection will always be painful.”

The students who were affected the most by the changes within this year’s process were those who overshot in early decision, Oxelson said. “These are the kids who took a huge leap of faith because of test optional and applied to a school where their GPA range did not make them competitive for admission and their testing, or lack thereof, didn’t support applying to that college.”

If students majorly overshoot with early decision, they essentially guarantee themselves a rejection or deferral, Oxelson said. Then, they apply regular decision, where the applicant pools are much larger. “In their defense, most of these students didn’t know that the applicant pools were going to be that big. Nobody did,” he said. Instead of having five options in a previous year, for example, a student from this year may have only had two options, Oxelson said.

Although Eli Scher (12) was rejected from his ED school, he does not regret applying there early, he said. “I had no way of knowing that acceptance rates would go down,” he said. “If I applied to a different school ED and not gotten in, then I would have always wondered if I made the wrong decision. There is just no way of predicting what’s going to happen.”

Nathan Zelizer (11) is not overly worried about the changes to the college process and outcomes, he said. “If [the] worst case scenario is that students have one or two less options, then that’s not too bad,” he said. “I think when you have a large group, those changes seem to get exacerbated, but if you look at it individually it’s less scary.”

Two of the success factors considered by the college counseling department (CoCo) are how happy the students and families are with the support they received from the CoCo and where the students with GPAs in the middle and lower range of the class end up going to college, Oxelson said.

The CoCo sends out an anonymous survey at the end of each year for students and parents to express feelings regarding the advice they received concerning college lists, essays, and interviews from their student’s college counselor and the CoCO in general. For the Class of 2021, Oxelson is generally pleased with the results of the anonymous survey that he has received thus far, he said.

The CoCo considers where students in the middle and lower GPA ranges end up because it is never a surprise where the students with the highest GPAs attend college, Oxelson said. “For kids with average or below average GPAs, that’s where I think as college counselors we really imagine the value that can be added at a place like Horace Mann.”

At Horace Mann, though, test-optional policies are not necessarily a positive for every student, Oxelson said. Since most Horace Mann students have the resources needed to succeed on standardized testing, the school’s students generally have very high test scores, he said. The test optional policy means that students at the school will be competing against significantly more students, many of whom did not even submit test scores, Oxelson said. “If you perceive your testing ability to be an advantage, you feel like that’s been diluted a bit because there are going to be kids who are going to be considered who don’t even have testing,” he said.

For the Class of 2022, the CoCo plans on advising students to make more sensible choices for early decision, Oxelson said. “You can still aspire, just don’t overshoot,” he said.

Many schools that have previously been “target schools” for some of Horace Mann’s students, such as Boston College, might actually become “reach schools” for those same students as a result of the lower admissions rates, he said.

Corey Brooks’ (11) college expectations prior to this year were higher than going into his senior year, he said. “There are some schools that I once thought that I could probably get in, that now I’m more unsure of,” he said.

Scher would advise the incoming seniors to hope for the best, but expect the worst in the college process, he said. “I know that sounds pessimistic, but it’s important to not have too high of expectations because you’ll just set yourself up for disappointment. Instead of expecting the best possible outcome, try to get excited about all of the schools on your list, especially any ones you’ve gotten into already.”

Piper Wallace (11) is not too concerned about the changes in the college process, she said. “It’s reassuring to know that this is an issue that’s affecting every single person at the school and not just you,” she said. “If I get screwed over by these changes, who’s to say that 50 other people didn’t also get screwed over?”

Going forward, Benson thinks that an overall goal for the school should be to emphasize that just because a school is selective does not mean it is the right school for you, she said.