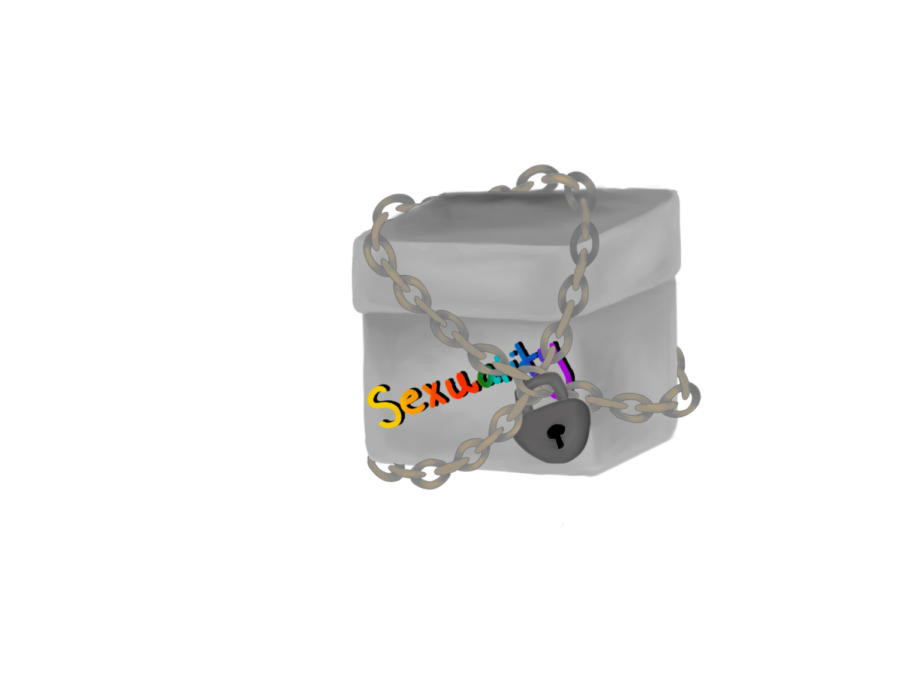 When Gayle* (11), who is anonymous because she is not publicly out, was in middle school, the concept of queerness was foreign to her. “It never even entered into my brain that I could be queer,” she said. “I had nothing to name myself. I just thought I was straight. I was a straight person that got nervous around girls.” It was not until eighth grade, when Gayle began reading books with queer characters, that she recognized and felt validated in her own queer identity.

“Trying to conform was probably the most dangerous thing for me to do to my own mental health, but that was just something I had to do to get by and get out.”

For many middle school students, a lack of understanding from fellow classmates and presence of visible role models can inhibit a student’s recognition and acceptance of their own queerness.

Angelique* (11), who is anonymous because she is not out to her family, did not perceive her queerness in a negative light in the Middle Division (MD), but she felt distinctly isolated from her peers — aside from one person in her grade, she knew no other queer kids, she said. When she thought about her queerness, she felt ostracized, and, since she had recently transferred schools, she felt it was better to suppress her identity. “[My queerness] didn’t really carry much weight, because I just put it off for a long time. I didn’t really need to think about it, so I didn’t.”

Suppression of their identity functioned as a method of survival for Studio Arts Manager Emily Lombardo. Upon entering middle school, Lombardo found that restrictions surrounding gender expression became much tighter — when they engaged in role playing games with their friends at a young age, they always assumed a male role, but at a certain point that type of play was prohibited. Without a support system, Lombardo felt the need to conform for her own safety, she said. “Trying to conform was probably the most dangerous thing for me to do to my own mental health, but that was just something I had to do to get by and get out.”

Growing up in the hostile environment of the 1980s without any queer role models, history teacher Dr. Daniel Link was dissuaded from coming to terms with his identity. As a result, he attempted to move any thoughts about his sexuality into “a box that was not to be opened.” While this tactic was not beneficial for his well-being, it helped him through middle and high school, he said.

Although she did not recognize her queerness until a later age, history teacher Dr. Alicia DeMaio also recalls a strong sense of othering that defined her time in middle school. At her Catholic school, students had the option of wearing a sweater or a sweater vest with their uniform, and DeMaio always chose to wear the sweater vest. She realized that she was the only student who chose to wear this piece of clothing, and she slowly became proud of this choice, she said. While she could not pinpoint the reason behind her difference, she could recognize and accept that she carried “an outward marker of difference.” Looking back, she views this moment as an early sign of her queerness.

Even before he came out, Alex Nagin’s (11) peers bullied him for his differences, including his higher-pitched voice and lack of male friends. However, this experience motivated Nagin to come out and be more outspoken about the harassment he faced, he said. “I don’t think I ever viewed being gay as a negative thing, but I think I was frustrated with the fact that everyone else around me seemed to think it was a negative thing.”

Decades ago, any representation of gay men in public was contextualized by illness and the stigma that surrounded HIV and AIDS, MD English teacher and faculty leader of the MD Gender and Sexuality Alliance (GSA) James Brink said. During his middle school experience, there were no openly queer people in Brink’s life, and the only time he became aware that he had met a queer adult was when the head of his middle school developed HIV and stepped down.

This initial experience played a key role in Brink’s negative perception of this identity, he said. “For that to be my first experience with having known a queer adult, somebody who then became ill and passed away, certainly shaped the way I thought about my identity, and certainly reinforced the messaging I saw around me that associated queerness and sicknesss.”

In more recent years, students would hear negative sentiments about queerness from their family members and then relay those messages to others in school, Tonya* (11), who is anonymous because she is not publicly out, said. After an assembly during which an MD student came out as pansexual, Tonya remembers her classmates invalidating the girl’s identity and saying she only came out for attention. This rhetoric was especially damaging for Tonya to hear at the time, she said. “To me that felt like, well, even if I did come out maybe people would say, ‘Oh, she’s just trying to be different.’”

Similar to Tonya, Gayle feared judgement from her peers in response to any display of queerness. During lunch, Gayle would pass the office in which MD GSA meetings were held and feel envious of the bonding she saw inside, she said. “They were all laughing and it just felt to myself, ‘Wow, I really want to be doing that,’ but I just kept on walking because I could never even open the door and go in, because I’m so afraid that, ‘What will they think of me? What will the people on the outside that are not in that room think of me?’”

Desmond Singer (6) does feel comfortable expressing their identity at school, but as they have grown older, they have noticed a lack of exposure to and understanding of queer issues. Since they came out as nonbinary in second grade, they have become more educated on queer-related topics, and, as a result, they are more aware of sentiments from their peers that might be problematic, they said. “There are people at school who still don’t use my pronouns, and they’re new people coming in who are getting my pronouns from one [of those people] or just assuming what my pronouns are.”

“To me that felt like, well, even if I did come out maybe people would say, ‘Oh, she’s just trying to be different.'”

Middle school can often be a difficult place to grow into a queer identity because of the budding development students undergo, Link said. It is the first time that kids are thinking romantically about other people, a new and awkward experience, and there is a large emphasis placed on conformism. “If you are expressing interests that don’t seem to fit the norm, then that is threatening, strange, worthy of shaming or shunning on the part of the majority of the population,” he said.

The MD GSA works to combat any feelings of negativity that might result from this environment, Brink said. “It’s a space where people know that they’re going to be accepted for who they are, whatever that means to them at that point in time.” Even if students do not attend the meetings, knowing that GSA exists and that there is a group willing to support them can be valuable, he said.

Even though Gayle did not attend GSA meetings in the MD, she felt a sense of affirmation in her identity when a girl on her bus came out as bisexual. After the girl first came out, Gayle simply felt congratulatory, but as middle school went on, she began to wonder whether that identity could apply to her as well, she said. “When you see [queerness] reflected in your community, it gives you the strength to be like, ‘Oh, it’s not just a phase. This is not just something that will pass or something that is not valid.”

Nagin experienced similar validation while watching YouTube videos with queer representation, he said. The videos did not contain explicitly queer content, rather, they exhibited visibly queer people in an average way. “It was like, ‘maybe this isn’t a totally isolating thing and maybe there’s a world out there where I may be able to live normally.’”

While Brink did not have many positive representations of queerness in his life at a young age, he has seen the situation change for the better — people are now more open about their queerness and there are queer faculty members at the school. “I’m certainly glad that has happened, that people know that they’re not alone in a way that I didn’t know when I was in middle school.”