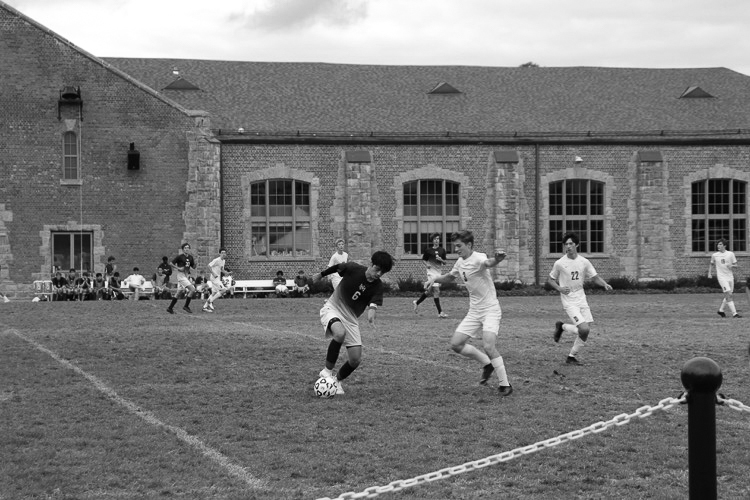 The Boys Varsity Soccer team had ups and downs this week in their two games. The Lions beat Hackley 3-1 on Monday and lost to Dalton 2-1 on Wednesday,

The Lions game plan was pretty simple. Game play is based on what they work on during practice, trying to get everyone to play, and just working hard, Boys Varsity Soccer coach Gregg Quilty said before the games.

“We played really well as a team [during the Hackley game],” Owen Stafford (11) said. “We had some great team goals, we were aggressive and energetic the entire time, and we just wanted it more than Hackley.”

The Hackley game ended up ending early because of thunder and lightning, Quilty said. While the officials could have suspended the game, because it was already in the second half, it was considered an official game, he said.

Schlumberger said that the game suspension was a fair call. The Lions went into the second half 2-1, then their goalie Matthew Edelman (11) had a great save on a free kick, before Schlumberger scored again at the 69 minute mark, making the score 3-1. “We would have kept the lead,” Schlumberger said.

Quilty only had a few critiques of the game. Right before halftime, Hackley scored on a corner kick, Quilty said. “We just have trouble defending those; other than that the defense completely locked down the field, they didn’t let anyone down the middle and didn’t allow hardly any shots at all.”

During the game against Dalton, Schlumberger scored the only goal. Dalton scored once in the first half and then again in overtime, Stafford said.

“We got [an early lead] and then they hit two shots perfectly in the top corner,” Max Ting (11) said.  “We played a much better game and we were probably the better team. Sometimes we just lose like that.”

While the team came out strong at the beginning of the second half, the team’s energy decreased and Dalton just wanted it more than the Lions did, Stafford said.

The Lions next game will be against Riverdale at Homecoming on Saturday. “They are a pretty good team so hopefully we don’t lose momentum from [Wednesday],” Ting said. “We have had a pretty good vibe the last few weeks.”

The Lions are confident in their ability to have a fun and rewarding game against Riverdale, Schlumberger said. After the loss on Wednesday, the Lions hope they can build on their loss and see how they can positively respond to it, he said. “Everyone played together really well and the captains have done a really good job.”

“Our chemistry is really good and everyone is excited for Homecoming,” Ting said.

In general, the team has one main goal for the season. “We are in the top four [of the Ivy Preparatory School League] so at this rate we should go into the NYSAIS tournament, we just have to keep that up,” Spencer Kolker (10) said.

“It’s been years since we’ve been in the NYSAIS tournament, so it’s definitely a goal to get into the post-season tournament and hopefully win a round or two,” Quilty said. “We want to place in at least the top half of the league so that we get selected for it.”

“Hopefully if we keep up the streak of beating most of these big teams and capitalizing the small teams and not losing to them, we can win the league,” Schlumberger said.