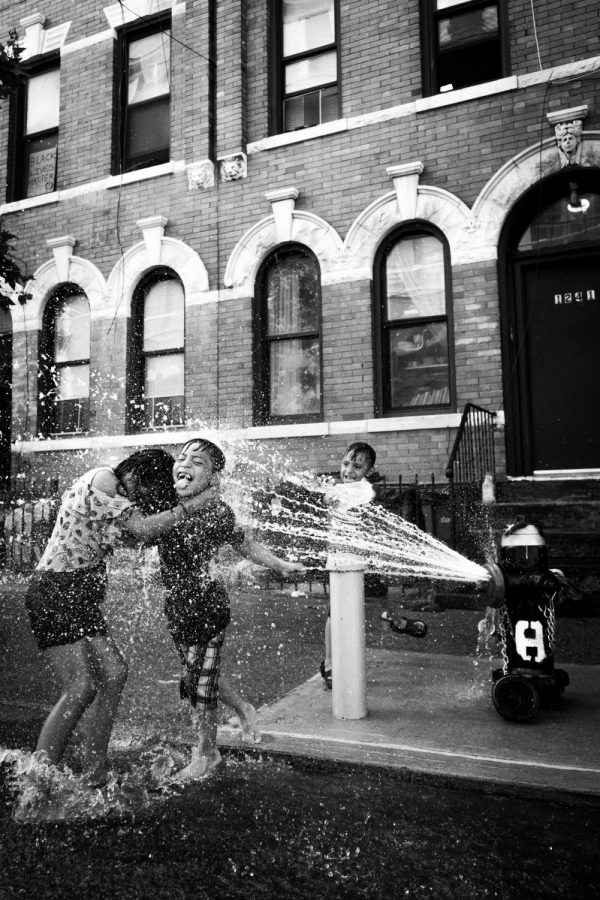 Silverman was first introduced to the opportunity when teaching photography at a non-profit called Concrete Safaris over the summer. His boss sent him a submission link and he applied to have his work featured in the gallery, Silverman said.

In August, he submitted five of his best pieces, and in late September he heard that two had been selected for the exhibit, he said. “I was surprised. I recently found out that there were hundreds of submissions and when I went to the gallery opening on Monday, there were 20-25 pieces, so definitely a small selection but a big pool.”

The first of Silverman’s two photographs was taken in March 2020 and is titled “Social Distancing.” It depicts an empty midtown in rainy weather with a lone delivery biker. “It showed the craziness of the time,” he said. “It was a surreal feeling to be out there shooting with no one else there, everyone fearful of what was to come.”

Silverman took the second photograph last June at a Black Lives Matter protest in Brooklyn, he said. “At the time, there were protesters clashing with police, and off to the side, there was a woman with a mask that says ‘I will breathe’ which relates to what George Floyd said.”

Although Silverman helped curate the school’s Black Lives Matter exhibit last year as well as the Summer Gallery show, this is his first out-of-school exhibit. “I am definitely excited because this is going to be my first gallery opening. I’m excited to see what comes.”

Silverman’s photography journey began in seventh grade. “I’ve always been interested in New York City as a whole and I love living here, so I started by walking around neighborhoods in NYC and taking pictures on my iPhone.”

Over time, Silverman developed a love for photography, buying his first camera, a Canon EOS Rebel, with the help and support of his parents. He used to think his niche was sunsets but he then discovered it was cityscape images, he said. “I now call myself a street NYC photographer.”

Upper Division photography teacher Aaron Taylor has taught Julian for three years in Photography 1, Photography 3, and now in Directed Study in Photography. “He shows a definite passion for photography; he shoots when there’s not an assignment due for class,” Taylor said.

Taylor first met Silverman when Silverman was touring the school in eighth grade. Silverman went into one of Taylor’s classes with his parents, holding a portfolio. “I was really impressed by that and I was like ‘who is this eighth-grader that has a bound book of his street photography,” Taylor said. “I thought, ‘I hope this kid comes here and takes my class.’ I knew immediately then he was gonna be a great photographer.”

In the past, Silverman aimed to go out and shoot once every two weeks, especially at night and when it rained, he said. However, now in the midst of the school year, finding time to shoot has been hard. “I try to take advantage of breaks, the summer, and days off,” he said.

When shooting, Silverman finds inspiration from fellow photographers as well as New York City. “New York City is a huge inspiration of mine,” he said. “I love living here, the people, the food, the culture, everything about it.”

Silverman also finds inspiration from exploring different neighborhoods and seeking out interesting scenes, he said. While he loves taking the subway, and often taking pictures on it, his least favorite part of shoots is the long commute to different photo locations, he said. “It can be an hour and a half from my apartment in Manhattan to Coney Island, where I love shooting.”

Despite these setbacks, the pandemic has actually given Silverman more subjects to shoot, he said. The best times for him to shoot have been during COVID, the Black Lives Matter movement and protests, and the 2020 election, he said. “These conflicts bring out the raw emotions which I seek in my photos.”

Silverman’s most memorable photography experience was at the height of the pandemic, when he left his house at midnight and shot continuously until 7:30 am, he said. “We used Citi Bikes to get to Times Square, shot there, then went over to East Midtown and shot there, we eventually ended up downtown and shot there,” he said. “I remember standing on the overpass of 42nd street at 2:30 in the morning with no one else around.”

Photography is one of Silverman’s favorite hobbies, he said. “I like having photography as a hobby and something I can turn to as a therapeutic thing. If I’m having a tough week, I can walk around and take pictures.”