Me2 Orchestra bridges music and mental health at assembly 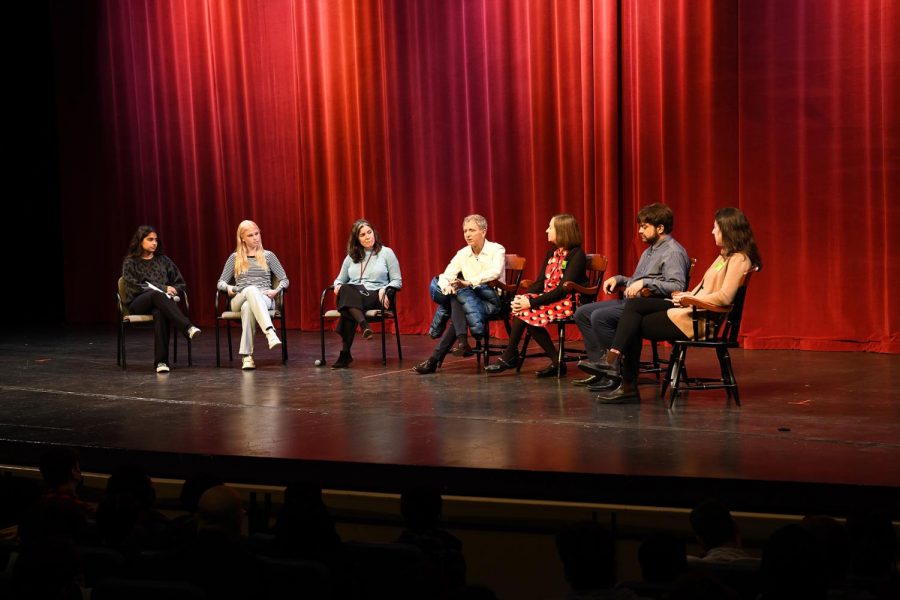 Members of the Me2/Orchestra discussed the stigma around mental illness at an assembly this Tuesday. Music Director Ronald Braunstein and Executive Director Caroline Whiddon co-founded the organization to create a judgement-free environment for musicians with and without mental illness. They spoke about their experiences with mental health along with bass player Rusty Chandler and violinist Roya Moussapour ‘13. After the assembly, the four speakers held a talkback and visited the school’s F period orchestra class.

The assembly began with students and faculty reading anonymous answers to a survey question about the meaning of wellness. The club then presented one of Me2’s virtual recordings recorded during the pandemic, followed by a Q&A with the musicians. In the Q&A, Khorana and Goldberg asked questions about how the musicians live with their mental illnesses and what music means to them.

Larry Tao (11) enjoyed the video of the orchestra playing at the start of the assembly. He also found it important that the orchestra breaks economic, social, and racial barriers to foster equality through their music.

The musicians shared their diagnoses and their personal struggles with mental health. Braunstein and Chandler spoke about their experiences with bipolar disorder and Whiddon spoke about her anxiety diagnosis.

Moussapour does not have a diagnosis — she joined the orchestra because of its judgment-free nature and her desire to work with Braunstein, she said.

During the assembly, Widdon said that the orchestra has a sign that reads “You are entering a stigma-free zone” on its door. When people walk through the door, their minds are reset so they do not judge others, she said.

In the talkback, students who are competitive musicians asked about how the stress of competitive music can impact mental health, Westphal said. Students also asked how to be equitable and fair to people with disabilities, she said.

Braunstein talked about the dramatic shape of the piece, the placement of notes in the beginning and end, and gave an overarching view of the piece which the students hadn’t done in rehearsal before, Hetherington said.

Braunstein conducted the orchestra and gave them comments about the dynamics and their entrances for parts of the song, Steve Yang (11) said.

“As a musician, it was really wonderful to hear other musicians talk about their journey with mental health and how it’s affected their lives,” Yang said. Hetherington also thought it was heartening to hear how being a musician has helped the members of the Me2/Orchestra face their mental health issues.

“The overarching goal [of the Me2/Orchestra] is to destigmatize mental health and spread the message of their organization to other people,” Khorana said. The orchestra creates a safe space where they can give each other support which expands the community that accepts people with mental disorders, she said.

“One of our primary goals as a department is to educate the community about mental health and wellness, and [to] destigmatize mental illness,” Westphal said. “It is important to give the community an opportunity to hear directly from people suffering from mental illness who have found ways to live meaningful lives and continue doing the things they love.”

WIC is different this year because they switched from one Wellness Week to multiple Wellness Wednesdays, Khorana said. The recurring events will help keep the club’s presence more consistent and prominent, she said.

“Students will say they’re stressed all the time, but there’s a certain point [where] it reaches a level where it isn’t normal,” Khorana said. Wellness Wednesdays create a space for people to talk about mental health. The club will also incorporate activities throughout the year to help students relieve stress.

Khorana hopes that the assembly sparks a discussion about what people can do to help their friends if they’re struggling with their mental health.