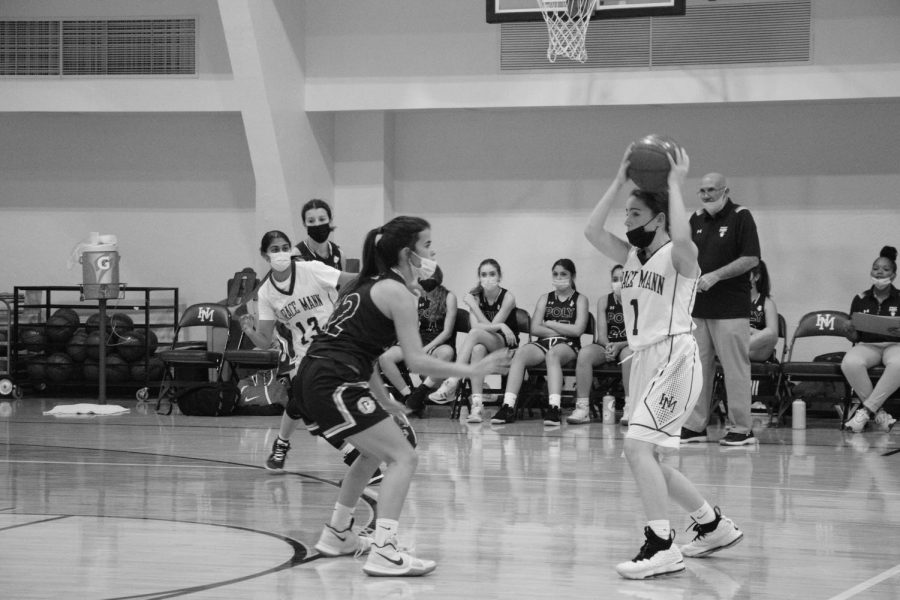 The games were the first official ones in over 18 months, and the team came in with a lot of pressure having won the state championships two years ago, Cecilia Coughlin (11) said. “In order to play at our full potential, we must find our groove again by playing strong defense and continuing to work on our offense,” Coughlin said.

Usually, before games, coach Ray Barile researches the team’s opponents to prepare the team, co-captain Sareena Parikh (12) said. “During the Chapin game, I didn’t have the opportunity to scout the opposing team’s players, so the team went in trying to do the things that they do well,” Barile said.

A couple of minutes into the game, the team figured out who Chapin’s best shooters and rebounders were, and then worked from there to strategize plays, Parikh said.

Goldberg was another standout player during the game because of her aggressiveness on the court, Parikh said. Goldberg’s energy stood out to Parikh because during Parikh’s first games as an underclassman, she played timidly because she was extremely scared of the opponents, she said. “Audrey played really aggressively as a starter for her first game, so I applaud her for that,” Parikh said.

During the game on Monday, the five starters scored at least six points, and a few people who started on the bench also scored.
However, the team still faced challenges, as three out of the team’s five starters finished the game on Monday with four fouls, Parikh said. “Once a player has five fouls, they are out of the game, but we ended up managing the foul trouble pretty well,” she said.

The team had a rocky start, but played better during the second half, Barile said. “When one person doesn’t know the plays, it affects the whole group, so that’s our biggest challenge — mixing the new people and the old and trying to catch up to where we belong,” he said. However, after halftime, the team discussed how to improve and their communication led them to play better in the second half, he said.

During the first half of the game, the team moved around the court a lot but wasn’t playing aggressively, Coughlin said. “In the fourth quarter, we were able to come together to make good passes and score, which we weren’t able to do in the first half,” she said.

Similarly, at Wednesday’s game against Poly Prep, the team struggled at the beginning, but was able to improve throughout the game, losing the game by only nine points. During the first quarter, Mia Calzolaio (12) and Goldberg often communicated on the court in between each play.

“There weren’t many, but if I were to choose one highlight of our game, it was when the push play we planned to do worked, and we were able to get a bucket,” Goldberg said.

The team fought back during the second quarter. Coughlin scored three times, earning the team a total of six points during the quarter. Parikh played aggressive offense as well, making a deep two-pointer in the last quarter that caused an uproar in the stands.

“Although throughout the game both teams were good at passing the ball, ultimately, our school’s team had a lot of turnovers,” Goldberg said.

There are always little things the team can fix, Parikh said. “We have to learn how to play smarter and make better decisions in quick seconds because that would not only help us score more, but would [allow us to] make fewer turnovers and play better defense,” she said. In order to achieve this goal, Barile wants to come up with new sets — structured player positions — to get the team to play more aggressively.

The team’s primary goal is to improve throughout the season and play their best on the court, Goldberg said. “As much as we love to win, it’s about how we play, not how the other team plays,” she said. “What we put on the court should be a representation of ourselves.”

The team is on track to reach their potential by January as they continue to work hard in practices and absorb the feedback their coach gives them, Coughlin said.

The Lions sit down after each game and watch tape of their plays in order to improve for the next, Barile said. “This will allow us to understand the mistakes we made and what we should have done, which is how we make ourselves better,” he said.

Being a close team translates to better play on the court, Barile said. Barile credits a part of the success of previous GVB teams to being a tight-knit family.

During her freshman year, Coughlin joined the team not knowing many of her teammates, she said. “The basketball team soon became my family and we had a very close team, arguably one of the closest teams at the school,” she said.

Barile has a lot of faith and belief in his team, he said. “The past is the past, but we have to find who we are, and this week, we took a big step.”