Dribble, Drive, and Dunk: Boys Varsity Basketball off to a Strong Start 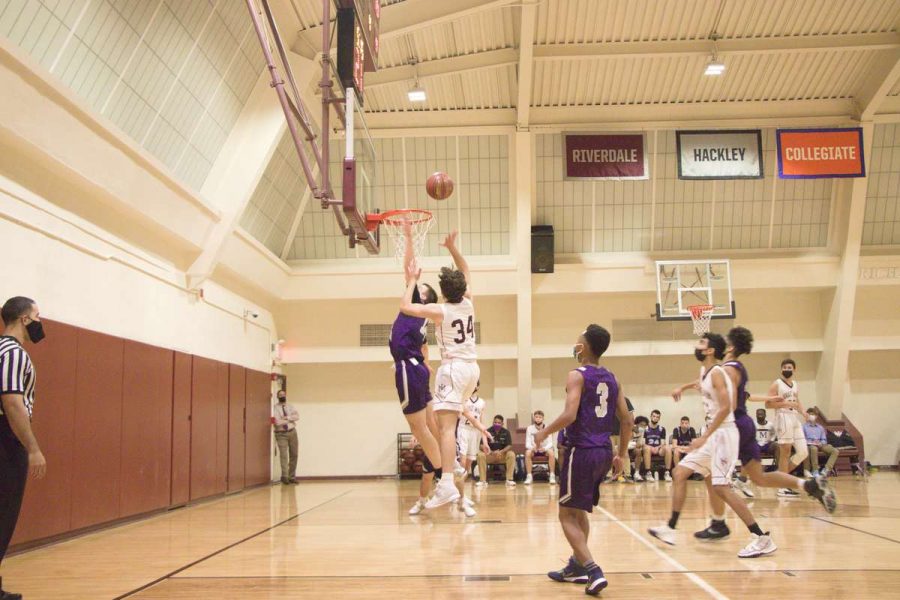 The Boys Varsity Basketball team started the season with a solid 3-1 record, after beating Loyola and Masters on Saturday and Monday, respectively, and losing against Poly Prep on Wednesday.

The Lions defeated Loyola with a score of 78-68.

After Saturday’s game against Loyola, the team looked to capitalize on their win and shift their focus to defense against Masters, Captain Ailill Walsh (12) said.

“Despite having a poor shooting performance as a team against Masters, we took a step in the right direction on the defensive end,” Walsh said. “Our increase in communication as well as our increased pressure on ball defense allowed us to push through in crunch time.”

“We were up seventeen at one point, and we ended up winning by eight,” Aden Soroca (11) said. “We had a little slip in the fourth, so we wanted to make sure [that for the Masters game] we didn’t do that again, and we were strong on defense all the way through the fourth quarter.”

Soroca stood out because of his great defensive plays in the second half of the game, coach Tony Wright said.

The Lions also won 50-45 against the Masters School on Monday — their third win of the season. “Masters was a pretty big and physical team, so it was definitely a gritty win,” Jake Zukerman (12) said.

The Masters game remained close throughout, and the team had to work hard to maintain a lead, Eshan Mehere (11) said. “We were leading the whole game, and then we fell behind by three points in the fourth quarter,” he said. The team ultimately took the lead by the end of the fourth quarter and won 50-45.

Walsh stepped up and took a charge during the final moments of the game, allowing the team to regain possession, Soroca said. “A player on Masters was taking the ball, drove to the basket, and Ailill stepped in front, set his feet, and basically let the Masters player run into him,” he said.

Similar to Walsh, Soroca pulled through in the final moments of the game with his excellent defense, Mehere said.

“Aden Soroca had the game-sealing steal,” Zukerman said. “We were up by three, they had the ball with like 20 seconds left, he jumped a pass and then got a steal, took it up for a lay-up to put us up five points and to basically win the game.”

Towards the end of game, the team began running their five-out offense — their Princeton offense — to secure the lead, Soroca said.

The Princeton offense is an offensive strategy pioneered by Princeton, Wright said. “The Princeton offense is where the players are constantly moving and the basketball is constantly moving,” he said. “You’re working to get the best shot, whether it’s a layup or a wide open jump shot.” It relies on passing rather than dribbling, and forces players to use movement to try to find the correct angles, Wright said.

Going into Poly Prep’s game, the team put more focus on their offense, running their plays correctly, and keeping good spacing on the court, and taking good shots, Wright said.

The team lost against Poly Prep Wednesday with a final score of 44-69.

The Poly Prep game started out competitively, with the Lions tied at the end of the first quarter. “Poly went on a big run and we couldn’t keep up,” Walsh said. “We were physically and mentally at that point in the game.”

The team’s loss was due to their lack of preparation, Walsh said. “This game wasn’t a very good reflection of our team and what we will become. When you face a team that recruits and has been practicing for the past six months, it’s hard for us to match that preparation when we haven’t even had two weeks of practice.” Walsh said.

The late start to practices was the biggest setback because some other basketball teams had been practicing together since August or September, Zukerman said.

“Offensively, the ball movement and shot selection is getting better,” Wright said. “We still need some work with that, as the kids are still learning the offensive system we run.”

Nevertheless, the team is making productive use of practices, which involve conditioning, shooting, and strengthening both their offensive and defensive plays, Zukerman said. While conditioning ensures the players’ physical fitness, plays are strategies they employ during games. “We have a lot of potential to get better, so we’re just trying to be really focused and making sure every practice is productive,” he said.

In addition to the lack of practice, COVID protocols require that the team wear masks during practice and games, which has created challenges. The need to breathe and receive oxygen makes wearing masks difficult during games, Soroca said.

Despite the difficulties with wearing masks, it’s important to wear masks at all due to the risk of the season getting cancelled, Zukerman said.

“All we can do is continue to adjust, and make the best of the situation,” Wright said. “A year ago, we didn’t have a basketball season at all. Therefore, I think these kids no matter how tough it is wearing a mask, they have more of an opportunity to have a good year.”